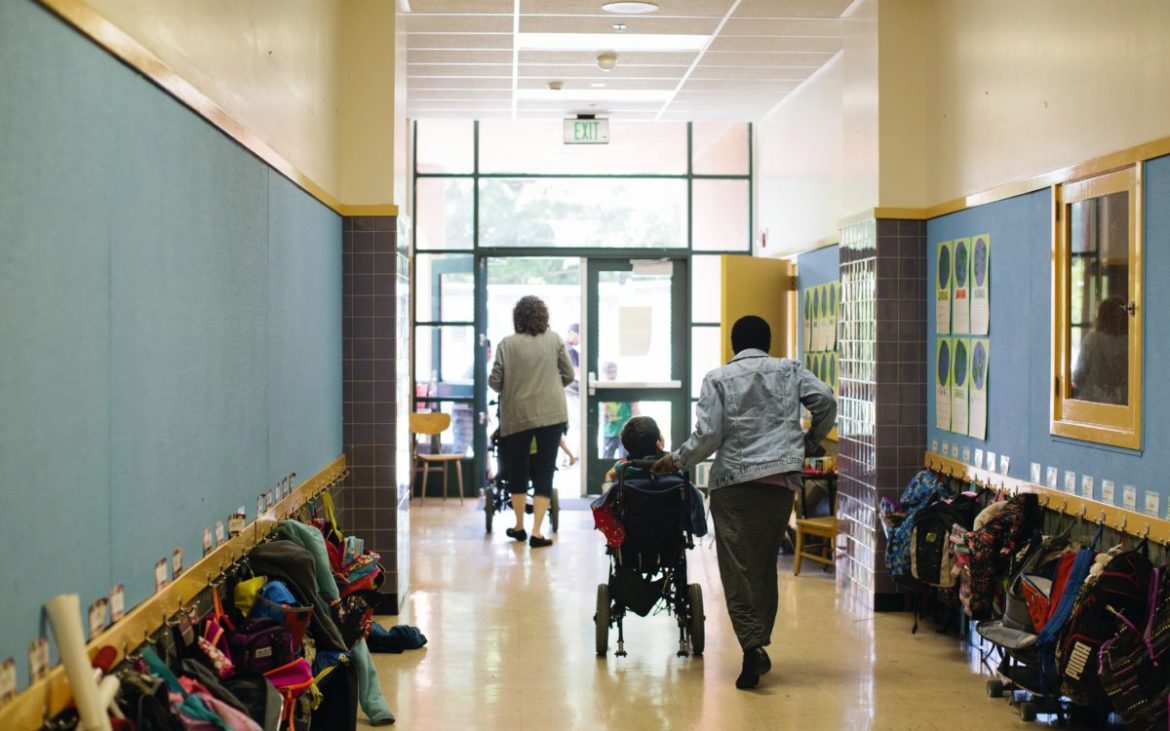 T.A.C.L.E. 1 and 2 students at Redwood Heights Elementary School in Oakland,(Technology & Augmentative Communication for Learning Enhancement) is a special day class program of the Oakland Unified School District. T.A.C.L.E. 1 is for grade K-2 students and T.A.C.L.E. is for grade 3-5 students. Photos by Alison Yin for EdSource

As schools in California begin re-opening virtually, state education officials have taken steps to improve distance learning for a group of students who were largely left behind in the spring: Those in special education.

But some parents wonder if distance learning will ever work well for students with disabilities.

The most significant new law, passed in June as part of the state budget, requires districts to craft distance learning plans for all students in special education, tailored to each student’s unique needs. The plans will apply to any emergency that forces a school to close for 10 days or more, including wildfires, earthquakes and pandemics.

The plans will be part of a student’s individualized education program, or IEP. Teachers, parents, therapists, counselors and other staff will create the plan during a student’s regularly scheduled IEP review, if not sooner.

“Finally, there’s something for parents to point at that guarantees a distance learning plan as part of an IEP,” said Robert Borrelle, an attorney for Disability Rights California, a nonprofit that advocates for people with disabilities. “Before this, some districts were doing nothing.”

About 800,000 students in California are enrolled in special education. Some have IEPs, which are tailored to an individual student’s disability and often include special services, and others have 504 plans, which allow students with disabilities — usually learning disabilities — accommodations in a regular classroom.

Special education has been a challenge for school districts since March, when campuses closed due to the pandemic. Many students in special education receive occupational, speech or physical therapy — services that are nearly impossible to provide virtually. And some students, such as those with developmental disabilities or attention deficit disorder, have difficulty following lessons online.

The result was that some districts provided no online instruction for any students, for fear of getting sued by families of students in special education who believed their children weren’t receiving equal treatment.

That changed in April when the state and federal governments both mandated that districts with shuttered campuses provide online learning for all students, including those in special education. But services have been spotty in some districts, which prompted the new state law requiring all districts to adopt distance learning plans for special education students.

Matt Tamel, an attorney who represents school districts in special education cases, said the new state law provides some much-needed clarity in a realm that’s been, at times, “vague and confusing.”

“Districts are not just trying to follow state and federal guidelines, but guidance from the governor and county health departments, as well,” he said. “It’s a lot for districts to manage. It’s not easy.”

Another new law requires schools to give parents the option of keeping their children home even if campuses re-open, in cases where the children are medically fragile or especially vulnerable to contracting Covid-19. Schools would have to continue providing online learning in those cases.

But despite the new laws and guidelines, uncertainty looms in many districts as teachers, administrators and parents try to make sense of the requirements, said Noreen Ringlein, an advocate at Community Alliance for Special Education, a Bay Area nonprofit that helps parents navigate special education laws.

“It’s pretty much pandemonium,” she said. “Districts have worked really hard to figure this out, and parents need to be patient and reasonable. But at the same time, they need to hold districts accountable and make sure their children get the services they need.”

Meanwhile, occupational, speech and physical therapy remains a hurdle for most districts. Some districts are applying for waivers so they can offer special education services in-person on school campuses, and others are looking at ways to send therapists to students’ homes, Tamel said.

Tamel’s firm is advising districts against this, to protect the health of school staff. Instead, districts should work out alternatives with individual families, he said.

Rebekah Rocha, a charter school principal in Santa Rosa whose 11-year-old daughter is severely disabled, is doubtful that no matter how hard districts try, special education will ever work well remotely.

“The typical child in special education already struggles so much, and requires so much support,” she said. “Even in the best of circumstances, it’s hard. Some kids with mild disabilities might have some success with online learning, but for kids like my daughter, I honestly don’t see it working.”

Rocha’s daughter has struggled since she stopped attending school in person. Her behavior has worsened, and she’s lost important skills.

Rocha is trying to place her in in-person child care this fall, with a 1-on-1 aide, because she believes the benefits would outweigh the health risks.

“Having her home, trying to do remote learning, has been hard on all of us, including our other children,” Rocha said. “We’re trying to be optimistic and stay positive about this fall. But we need to be realistic.”

The stakes are particularly high for Moira Allbritton’s 17-year-old son, Charlie, who has autism, epilepsy and a traumatic brain injury. The San Diego teenager desperately wants to earn his high school diploma, and is worried that online learning will pose too many difficulties and he won’t graduate.

Before schools closed, he split his day between mainstream and special education classrooms. When his school first switched to virtual instruction, he didn’t worry too much about his academic performance because teachers weren’t issuing grades.

But this fall, students will start receiving grades again, and Charlie is nervous. His special education teachers have been “amazing,” Allbritton said, but his regular teachers have not had the time to see if Charlie is keeping up.

“Charlie might have made it with in-person classes, but now we don’t know,” said Allbritton, who also has an 11-year-old daughter with mild autism and three older children.

The uncertainty around her children’s schooling has been stressful on the whole family, she said. Her daughter has withdrawn emotionally and her son is frustrated that his academic dreams might be thwarted. It seems unfair, she said, that children whose parents have the time to monitor online classes will have a better shot at academic success than those who don’t, she said.

“I have moments where I want to extract them both from school and homeschool them,” she said. “It’s not that I’m a great teacher, but it would be one part of my life I have some control over, and we can put together a system that makes sense for us. There’s something alluring about that.”