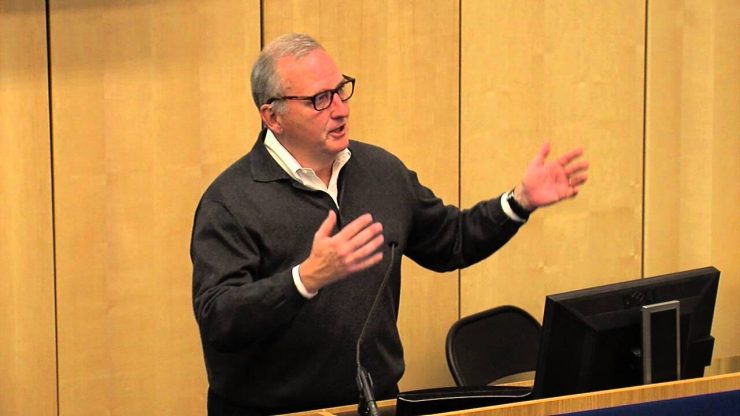 Four months into the novel coronavirus pandemic sees a large outbreak at UC Berkeley, a Bay Area county readying to write tickets to violators of its face-covering mandate, record numbers of new cases in California and frankly, Dr. George Rutherford admits he gets frustrated — even with some folks in the town he calls home.

“Yeah. I’m sitting here in the most affluent community in Alameda County and you see people walking around with no masks on. What the hell is that about?” he said during an interview Tuesday.

Rutherford, who heads the Division of Infectious Disease and Global Epidemiology at UC San Francisco and is a professor of Epidemiology and Health Administration at UC Berkeley, is a popular interview subject these days and the message he relays is blunt and intended to scare.

What we knew as normal isn’t coming back for at least a year and until it does the best bet is to keep your distance and keep your mouth and nose covered.

His advice is worth heeding for people thinking about sending kids back to school, scheduling events or making other plans related to what was once daily life.

“We’re in a once in a century occurrence,” he said. “We’re basically treading water until we get a vaccine, then we can go back and do what we want.”

During the interview Rutherford said his day had already begun at 3:30 a.m., the time a European interviewer wanted the insights of someone who works with the World Health Organization and the Centers for Disease Control and Prevention on the spread and control of COVID-19 and other infectious diseases.

Rutherford tirelessly delivers his message because he wants the pandemic to end as much as anyone. He acknowledged that people are suffering economically and mentally and anxiously await a return to normal.

“Sure they do and I’ll be at the front of the line,” he said. “This is not the time to pursue rugged individualism. This is a time to avoid getting infected.”

Contra Costa County, which has recently seen a sharp rise in cases, is authorizing an ordinance that would authorize citations for organizations that violate current health orders.

Asked if Piedmont should more stringently enforce the current health mandate Rutherford said, “Yeah, I do.”

Rutherford delivered a similar message to the Piedmont League of Women Voters in May, but the situation has enlarged since then.

“In the larger picture there’s been a surge of cases since mid-June, some of it in the population that’s always been affected, people living in dense housing with multi-generational families,” often working on what is known as the “front lines” of service jobs that offer less protection or opportunities for distancing. “There has been ongoing transmission in those places and the rate has gone up,” he said.

Contra Costa and San Mateo counties have seen a jump in cases since the short-lived reopening, as has Marin, fueled by “a massive outbreak at San Quentin that adds to the surge across the Bay Area,” along with “a surge in Solano County and other agricultural counties in the Central Valley,” Rutherford said.

“I think in some counties (reopening) was clearly premature,” he said. “The ones that held tight — Santa Clara, Alameda, San Francisco — put up with a lot of dissent coming down on the side of public health. I hope the next time there is a surge that people remember.”

Piedmont has a low incidence of cases, with 18 recorded as of July 15, but the community is not immune. Rutherford noted federal Centers for Disease Control and Prevention estimates that 40 percent of those infected are asymptomatic, increasing the chance of transmission without proper precautions.

“That’s why it’s urgent to wear a mask,” he said. He has noted that while 100 percent of people wearing masks is ideal, even 80 percent compliance would greatly reduce the spread of the virus.

Asked what he would say to Piedmonters who think they are not at risk and continue to socialize, Rutherford responded, “It’s not a good move. Given the incidence and severity, what we know about the importance of distancing, and given our limited options, I think it’s foolhardy.”

Just a week ago UC Berkeley had an outbreak of cases in one week, most of them arising from parties held by university fraternities and the failure to take basic safety measures. According to officials. “That was ridiculous,” Rutherford said, adding, “It’s a cautionary tale. How much of that is people being dopey or how much of that is people being willful, I don’t know.”

The prevalence of asymptomatic carriers is also a concern as a new school year nears. The Piedmont school district has backed away from plans for a limited reopening in favor of remote instruction. Rutherford felt that the district’s original plan “would have effectively limited mixing, kept small social groups and maintained distance,” and hadn’t heard about the policy shift.

“I don’t know all the facts that they know,” he said. “But it’s hard to envision how to do something one way in Piedmont and do something different in the Oakland district.” Oakland schools plan to open in less than a month with instruction from home.

“We’re not so worried about younger children” who don’t seem to be as susceptible, he said. The concern is adolescents and teachers, who are vulnerable. Distancing measures that work for the youngest students would be nearly impossible with adolescents, Rutherford sad. “As the prevalence goes up, the likelihood (of infection) goes up as well. We’ve seen that in several places,” he said. “The last thing you want is to have a huge outbreak.”

As for advice he would give parents and teachers, “Wear masks and make your kids wear masks.”

Rutherford is optimistic that an effective vaccine can be found and administered relatively soon. “I would hope we have one by the end of this year or early next year and have large chunks of the population immunized relatively rapidly over a few months,” he said.

Asked if that would mean a return to life as we knew it before the pandemic he said, “as long as the immunization is widespread and the vaccines work.” As with the use of masks, there is a portion of the population that also resists vaccines.

Asked what advice he would give those planning for events or travel next spring, Rutherford said, “Don’t. It’s not going to be through by next spring, maybe it will by next summer.”

What other advice does he have? “Get a (seasonal) flu vaccine when it becomes available,” he said. “We don’t want hospitals and ERs full (with flu patients) while dealing with the next COVID surge.”