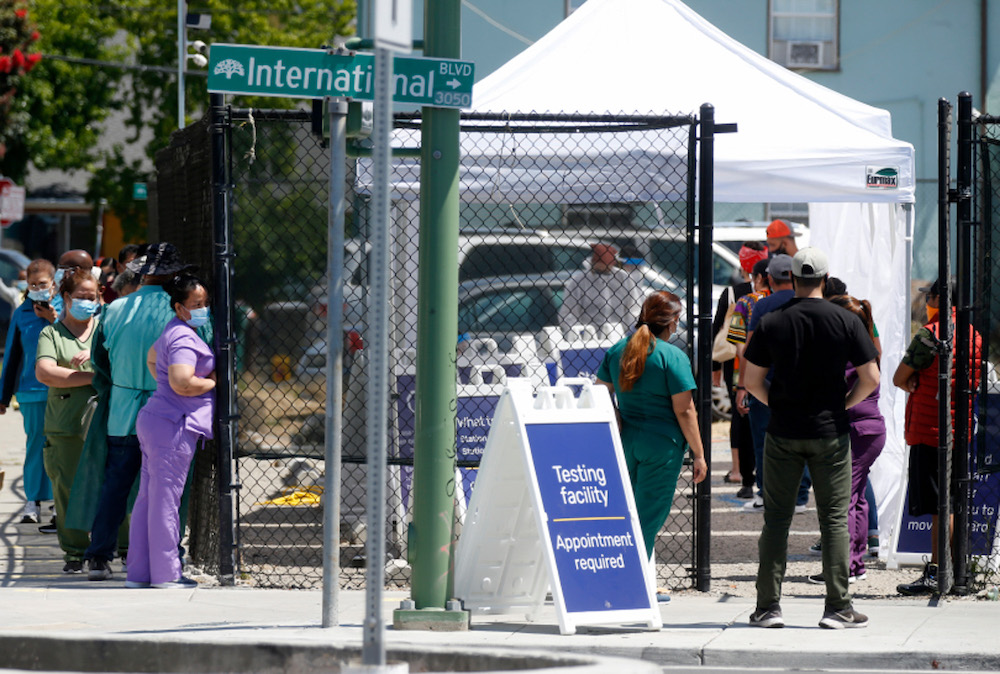 As the nation grapples with growing demands for coronavirus testing, renewing shortages and delays in results, California is setting new guidelines for who gets tested first, state health officials announced today.

Dr. Mark Ghaly, health and human services secretary, said in a video conference that the state will prioritize vulnerable patients and those with symptoms. The state also will be asking medical providers to do more in-office testing, and for health insurance plans to pick up that cost.

The state’s new guidance divides testing into four categories. The top priority will be patients hospitalized with COVID-19 symptoms, as well as people linked to an outbreak. All other people with symptoms fall into “Tier 2,” as do asymptomatic people who are considered high risk, such as health care workers and those who live or work in nursing homes, homeless shelters and prisons.

Essential workers without symptoms fall under the third category. More widespread testing of the general population will occur once testing turnaround time is less than 48 hours, according to the new guidelines.

“We all know that testing in California is a vital piece of our response, not only to focus on taking care of patients… but also to understand the patterns of transmission across the state,” Ghaly said.

In the last several months, local health officials encouraged all people to get tested, even those without symptoms. Some counties promoted free, no appointment, drive-up testing for anyone. But as cases began surging last month and testing demands strained resources, Californians found themselves waiting longer for appointments, and sometimes even longer for results.

Angel Ruiz, 31, of Van Nuys sought testing after attending a protest in late May. He first tried through the Los Angeles County website, but no luck. Then he tried a local CVS, and after several days of checking the pharmacy’s website every morning for an open appointment slot, he was able to schedule a test. He got his negative results 11 days later.

Other than a dry throat, he had no symptoms. “So I didn’t know if I could go to the grocery store or if it was OK to come in contact with my family,” Ruiz said. And the longer wait, the harder it becomes to stay isolated, he said.

California has averaged 105,000 daily tests over a two-week period, Ghaly said.  At the same time, the state is up against supply chain challenges and backlogs in commercial laboratories.

Commercial lab giants, such as Quest Diagnostics and LabCorp, have recently said that soaring demand is slowing their turnaround time for results.

“We attribute this demand primarily to the rapid, continuing spread of COVID-19 infections across the nation but particularly in the South, Southwest and West regions of the country,” Quest said in a statement on Monday.

Quest performs up to 125,000 tests a day nationally, double what it was doing eight weeks ago, according to its website. Still its labs are outpaced by demand. As a result, the average turnaround time is seven or more days, a statement read. Priority patients, such as those in hospitals, can still get results in about a day.

A Kaiser Permanente spokesperson said that it generally provides test results in two to three business days, but that fluctuates based on demand and capacity, and also whether the test is processed at their own labs or at a private commercial lab. Kaiser relies on commercial labs for about 10% of its tests in Northern California.

As part of its new testing strategy, the state is asking private providers— including doctors, pharmacists and nurse practitioners— as well as hospitals and clinics to do more of their own testing rather than refer patients to state-run testing sites. This will allow the state’s sites that offer free testing to focus on populations that don’t have as much access, Ghaly said.

By asking providers to perform more of their own testing, the state would also shift more of the testing costs to health plans. Ghaly said an average test costs $100.

A spokesperson for the California Association of Health Plans said that while it is awaiting more details on the upcoming changes, health plans currently provide coverage for tests deemed medically necessary and ordered by a provider. According to federal guidance, health plans are not required to cover testing for employment purposes or for public health surveillance. Ghaly said the state is working on emergency regulations that would classify testing for essential health workers and for those with possible exposure as medically necessary.

Some counties had recently made similar asks of their medical providers. Health officials in Santa Clara County recently ordered local hospitals and clinics to make testing more available. The county launched an online dashboard to show how its free testing sites were significantly outpacing local private hospitals and clinics in testing.

Some providers, like those at health centers, have been trying to do more of their own testing, but struggle to get tests, said Carmela Castellano Garcia, the CEO of the California Primary Care Association, which represents the state’s health centers.

While some have adequate supplies, she said, health centers in areas like south central Los Angeles have reported having only 10 tests on hand at a time. “That means they’re getting hundreds of calls from people wanting to be tested who they cannot accommodate,” she said.

And the turnaround time continues to be “alarming and unacceptable,” she said.

“We’re waiting seven to 10 days, and that makes the test pretty much useless,” she said.

CalMatters health care coverage is supported by a grant from the Blue Shield of California Foundation.