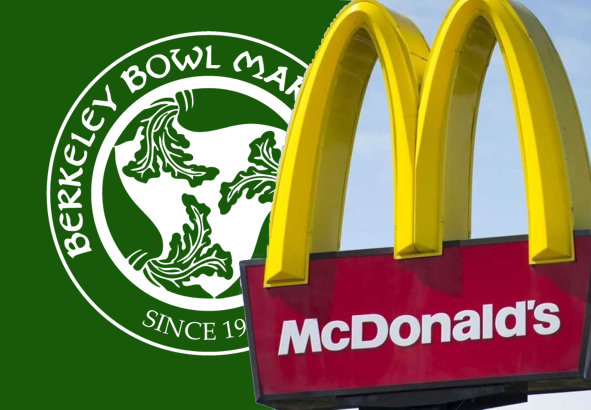 Berkeley Bowl quarantined workers and did contact tracing, while McDonald’s employees were discouraged from taking sick leave when symptomatic.

According to Berkeleyside, multiple Berkeley Bowl employees tested positive for COVID-19 at the end of June and early July.

The grocery store posted alerts at the entrances at Berkeley Bowl Marketplace (2020 Oregon St., Berkeley) June 29 and at Berkeley Bowl West (920 Heinz Ave., Berkeley) July 1. Both stores have remained open during normal hours, but Berkeley Bowl said diagnosed employees, and others who have had close contact with them, have been quarantined and the store has been deep-cleaned by a third-party cleaning company.

Nearby, a McDonald’s restaurant in Oakland’s Temescal District that has been linked to 25 cases of the novel coronavirus may reopen Sunday but must show it is keeping employees and the public safe from the virus, following a court order on Thursday.

Employees of this McDonald’s and of an affiliated restaurant in Berkeley and their family members, including a 10-month-old baby who experienced severe symptoms of COVID-19, have contracted the virus, according to a complaint filed in the case last month.

So far, those diagnosed with COVID-19 include a manager for both stores, 11 workers at the Oakland restaurant, six of their family members and seven workers at the Berkeley store, for a total of 25 linked cases, according to the complaint.

Workers allegedly were discouraged from taking sick leave when they experienced virus symptoms and were not told when their co-workers tested positive. An emergency ordinance in Oakland mandates paid sick leave for many workers affected by the COVID-19 pandemic.

Owners of the McDonald’s at 4514 Telegraph Ave., which closed in May after its employees went on strike to protest their working conditions, according to the complaint, face contempt charges if the store backslides, said Michael Rubin of Altshuler Berzon, an attorney for the employees and their families. The Berkeley restaurant is at 1998 Shattuck Ave.

The stores are franchises owned by a Michael Smith, who appears to live in Hayward, and members of his family. The owners must file a brief with the court by July 27 indicating how the Oakland restaurant has complied with the requirements of the restraining order.

Attempts to reach Smith on Thursday were unsuccessful. A spokesperson for McDonald’s Corp., which is not a defendant in the case, said the company does not comment on hearings or litigation.

The Alameda County Health Department, which has issued several relevant orders governing how restaurants do business, did not respond to a request for comment. The Alameda County Department of Environmental Health is to inspect the restaurant’s operations around July 22 to ensure it is complying with the court order.

The Oakland restaurant must meet 11 conditions listed in Thursday’s order, which will be in effect until at least Aug. 13, Rubin said.

Those conditions include providing adequate physical protection against the novel coronavirus for employees, implementing new protocols for cleaning and related training, tracing the contacts of everyone suspected of having been infected with the novel coronavirus while present at the restaurant, and more.