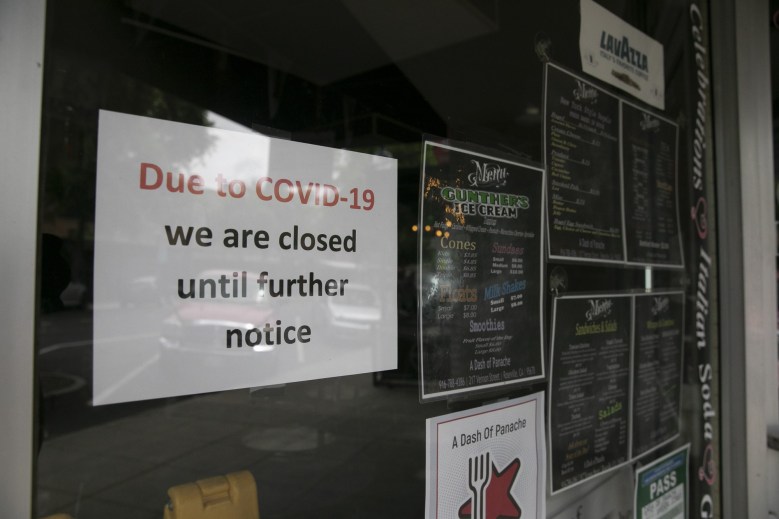 A closed business in downtown Roseville on May 14. Photo by Anne Wernikoff for CalMatters

As California approaches yet another pandemic inflection point, things are looking pretty grim on multiple fronts.

The state logged a record 11,000 new cases on Tuesday, and hospitalizations and intensive-care admissions remain at record levels, though the rate at which they’re increasing is beginning to slow down, CalMatters’ tracker shows. Deaths are also rising, hitting a record seven-day average of 100 last weekend.

After Gov. Gavin Newsom shut down massive swaths of the economy Monday, any remaining hope for a relatively quick recovery was dashed, experts told CalMatters’ Lauren Hepler. The second wave of closures hit businesses hard, with some forced to close their doors just a few days after reopening for the first time in months.

Nearly 6.6 million Californians have filed new unemployment claims since the onset of the pandemic, including about 288,000 last week — the highest weekly total since May.

Meanwhile, federal benefits of an extra $600 per week are set to end July 31, and California’s embattled unemployment department is facing a backlog of nearly 2 million claims just from the first three months of the pandemic.

Newsom will unveil new state guidance for schools today, and he seems poised to announce another semester of distance learning.

The implications are drastic. A first-of-its kind report from the Los Angeles Unified School District found that Black and Latino middle and high school students participated in online learning between 10 and 20% less than white and Asian students. Weekly participation peaked at 57% for English learners, homeless students, and those with disabilities or in foster care.

The coronavirus bottom line: As of 9 p.m. Thursday night, California had 356,178 confirmed coronavirus cases and 7,345 deaths from the virus, according to a CalMatters tracker.