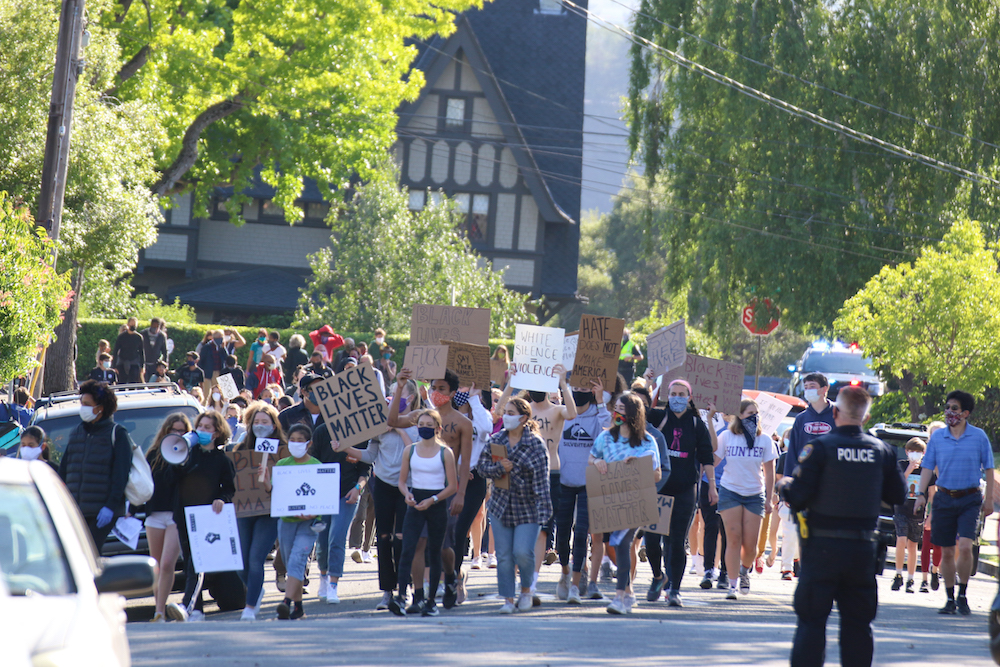 Students and families march through Piedmont in support of the Black Lives Matter movement in June 2020.

At the Monday, July 13 Board of Education meeting, which began with the unexpected announcement that PUSD would be shifting toward distance learning, the school board also approved a new racial justice resolution and announced reductions in some PUSD positions.

A new board policy condemning institutional and systemic racism

The Board approved a resolution “Condemning institutional and systemic racism and affirming a commitment to educational equity for Black students, families, and staff.”

Public feedback at a first reading of the resolution on June 24 made it clear there were many questions, comments, and concerns about the original proposal. Since then, community members involved with racial justice work have worked with Cheryl Wozniak to refine the language.

Many were concerned that the original version confused two different issues, equity and racial justice. Therefore, the resolution passed on Monday was addressed solely toward “condemning institutional and systemic racism”. There will be a separate equity policy passed at a later date.

“It is such an important policy and I’m proud as a district that we made this resolution,” Trustee Megan Pillsbury said. However, Pillsbury said that the school board is just starting their work surrounding race. She expects the board to examine further steps such as interdistrict transfers and that there will be a second racial justice board policy soon.

You can read the full resolution HERE.

Budget cuts begin with the elimination/reduction of several Classified and APSA positions:

“It is difficult to make these decisions,” Board President Amal Smith said. “The athletic director [cut] is based on what we expect to happen in the fall. We don’t have [the facilities] to rent right now. These are really hard times.”

Booker said these reductions are a part of the new budget caused by reduced funding by the state. They are Tier 1 reductions which include the reduction or elimination of 0.4 Administrator, 1.2 classified, 1.6 certified (teachers on special assignment), assistance coaches, travel/conferences, and classroom supplies. The Tier 1 reductions would amount to $570,000.

“Thankfully we were able to eliminate any Tier 2 reductions,” Booker said.

Tier 2 reductions include the elimination, reduction, or involuntary transfer of 9.3 certified teachers, 17.3 FTE classified, and stipends. Tier 2 reductions would have amounted to $1,470,000. Local funding has played a key part in allowing the district to avoid these reductions.

“We are unbelievably grateful for all of the support from the Giving Campaign and local funds,” Booker said.