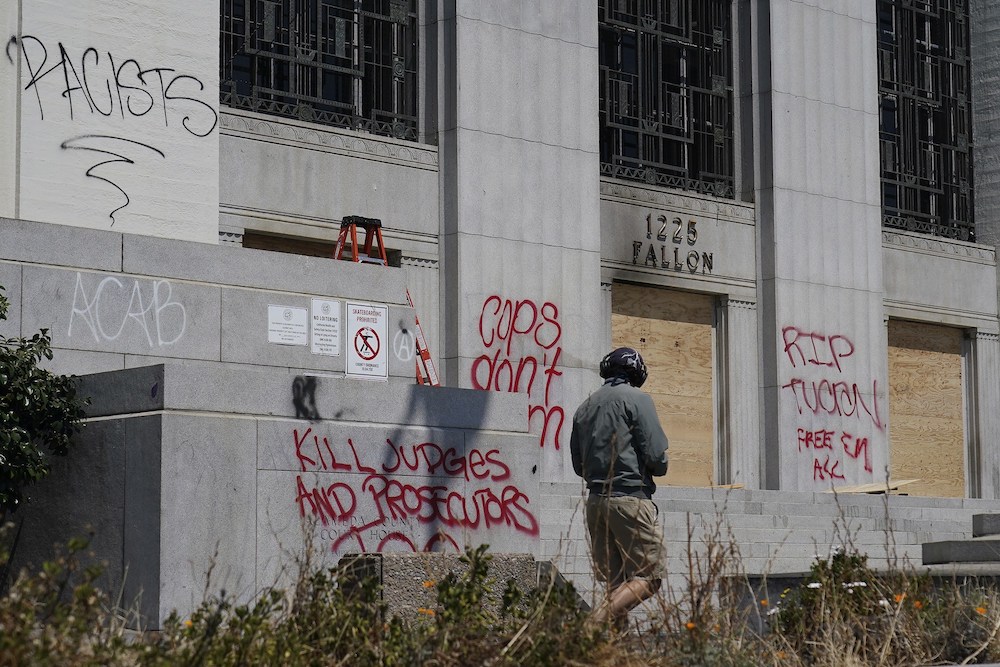 A man walks past wooden boards and graffiti outside of the Alameda County Courthouse in Oakland on July 26, 2020. Photo by Jeff Chiu, AP Photo

Peaceful protests against racism, police brutality and the intervention of federal agents in Portland, Ore. splintered over the weekend into destruction, vandalism and violence. Protests in Oakland, Los Angeles and Sacramento resulted in numerous arrests and hospitalizations, further inflaming tension between law enforcement and demonstrators.

In Oakland on Saturday night, “agitators” set fire to the Alameda County courthouse and smashed police station windows. In Los Angeles, a federal courthouse was graffitied and some windows broken, with police issuing a citywide tactical alert to draw more officers and resources. In Sacramento, City Hall was spray-painted and windows shattered.

The president last week threatened to send federal agents to Oakland to crack down on unrest, a suggestion forcefully rejected by Schaaf and Gov. Gavin Newsom.

Trump in early July deployed federal police to Portland, where protests have continued for 59 straight days. The agents’ tactics are currently under investigation by the inspector generals of the U.S. Department of Justice and Department of Homeland Security. Meanwhile, federal officers are on standby in Seattle and will soon be deployed to Chicago.