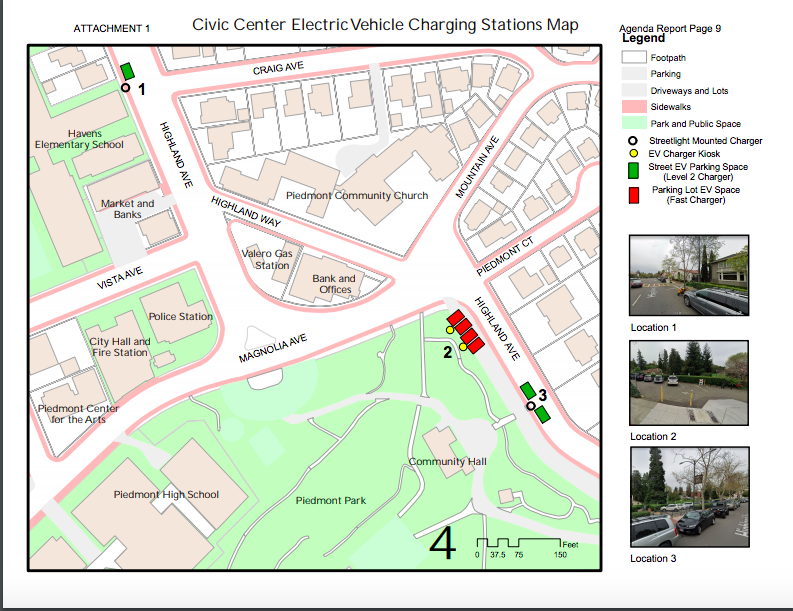 The Park Commission on Wednesday found ample agreement on the merits of a proposed pilot program to install electric vehicle charging stations in Piedmont at no cost to the city. Commission members unanimously voted to recommend the concept to the City Council.

The specifics of the plan as outlined, however, generated concerns, particularly over where the charging stations would be located and the commission recommended that those issues be addressed as the program is finalized.

Commissioners, most commenters from the public, and respondents in a survey largely supported the program’s concept as a means of achieving Piedmont’s greenhouse gas emission goals for 2030 and 2050 and encouraging more use of electric vehicles, or EVs for short.

With no industry and little commercial activity to address to reach the desired reductions, transportation is the biggest piece of the emissions pie to focus on and electric vehicles have the greatest potential for reduction, city Climate Fellow Justin Szasz told the commission in an introductory presentation.

The presented concept would make charging stations feasible for the city by installing many of them on existing public streetlight poles to greatly reduce the wiring and other infrastructure cost that would be needed otherwise.

The stations would be owned and operated by East Bay Community Energy, which emphasizes renewable power sources as the city’s chosen energy provider. EBCE would cover the cost of the stations and be responsible for their operation and maintenance. Piedmont would become the first city in Alameda County to employ the streetlight concept, which has been done in a fashion in London and Los Angeles. EBCE is offering the program as a demonstration to encourage other cities to join and the prospect of adding stations at no cost to the general fund is hard for the city to pass up.

Standard charging stations can cost some $31,000 for a slow-charging Level 2 installation to $90,000 for a fast charger.

Piedmont, which is already struggling with other potential expenses such as the community pool, does not qualify for grants from the Bay Area Air Quality Management District, and grants would only cover a portion of the charging station cost.

An analysis was conducted of possible station locations, with consideration of infrastructure costs and finding places that are centralized and have a high enough profile to encourage use. As proposed, the program would place four fast-charge stations with two ports each in the parking lot at Piedmont Park, two Level 2 stations beside the park on Highland Avenue, another Level 2 on Highland at Craig Avenue across from Havens Elementary School, and a pair at curbside on Grand Avenue opposite the Shell station by Ace Hardware.

A survey of 400 residents done in June showed that about three-quarters of respondents supported immediate GHG reduction measures and 55 percent approved of the locations. Another 15 percent, however, raised concerns about the program, largely around parking and traffic issues. About 26 percent of those answering own EVs and almost half of them said they would be likely to use the stations. Almost half of respondents said the stations would make it more likely they would buy an EV.

Park Commission members shared similar concerns about the concept locations, particularly around parking. Some suggested replacing some permit-regulated spaces at Civic Center instead of the Community Hall parking lot and the single Highland Avenue site by Havens School, which is in front of a private residence.

But the greatest reservation was over replacing two curbside spaces on Grand Avenue, where parking demand and turnover are high. Several suggested exploring locations on Linda Avenue instead, possibly near the school and park.

Commissioner Jim Horner noted the high parking turnover at Ace Hardware, saying “I think it would be a disservice to have cars parked on Grand for hours” while charging.

Commissioners also speculated about other potential issues, including vandalism to the stations, tripping hazards with cables, and the possibility that sidewalks would need to be widened or other works would be needed.
The concept itself had “pretty universal support,” Commissioner Patty Dunlap said. “I know we all want to see it succeed.”

The commission voted to recommend the concept to the council and that city staff and EBCE work to address specific concerns.