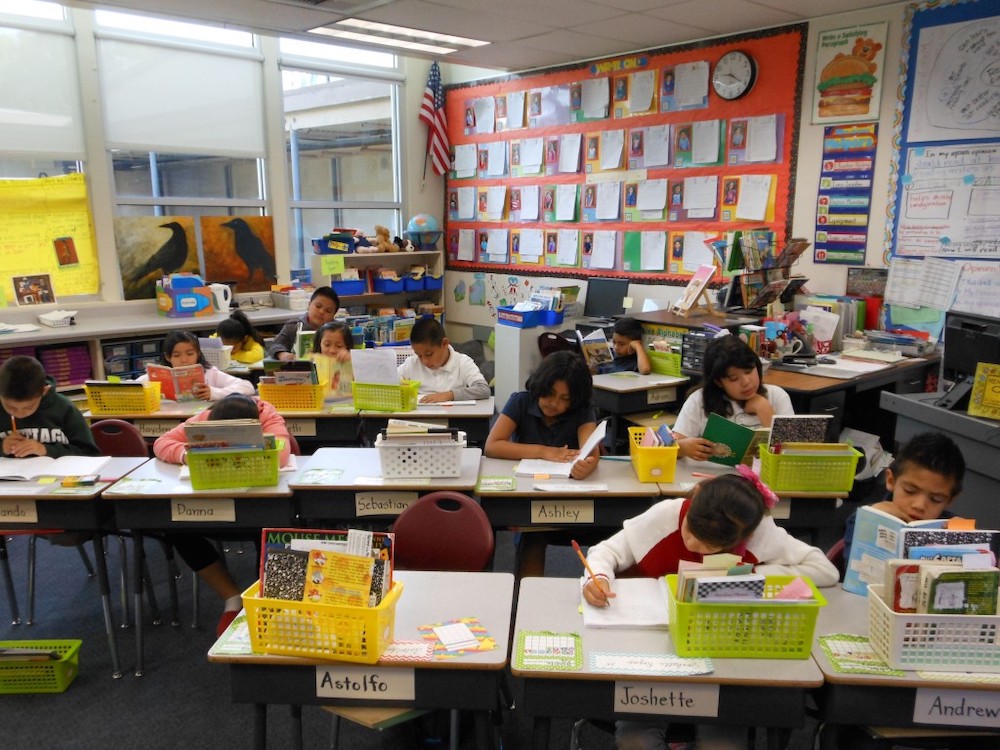 Before the pandemic, students work in a Santa Ana Unified classroom in a way that would be unimaginable today. Credit: Louis Freedberg/EdSource Today

The pace of school districts that will start the coming school year primarily with distance learning is accelerating in California. In recent days, districts serving over 1 million of the state’s 6.2 million public school students have announced that they will be teaching students remotely, at least to begin the school year.

The rapid increase in coronavirus cases and hospitalizations in the state just weeks before most school districts are due to open for the 2020-21 school year appears to be the driving factor in districts deciding to continue online learning for most or all of their students.

“I do think that if school had to open tomorrow, most of our districts would open with distance learning and that decision I think is a good one,” Thurmond said in a briefing on Wednesday.

He acknowledged that “conditions have changed dramatically” since the California Department of Education issued its guidance for school opening last month. “We know that in many communities throughout our state, we’re seeing high rates of infection in the community,” he said.

Many of the districts that have announced their plans for distance learning are still holding out hope that they will be able to open for in-classroom instruction sometime in the fall. Oakland Unified, for example, will open via remote learning on Aug. 10 in what officials say they hope will be an “opening phase” that will last four weeks.

Enrollment figures for Los Angeles Unified and several other districts include students who are attending charter schools, and it is not yet clear what charter schools around the state are planning for the fall.

Long Beach’s decision was especially notable because it is scheduled to open on Aug. 31, which is nearly seven weeks away, later than most districts planning to implement distance learning.

Jill Baker, who took over as superintendent on July 1, explained that “this decision was a hard one to make,” saying the district would offer remote instruction to all students at least until Oct. 5.

“Covid-19 cases continue to increase, hospitalizations are on the rise, and the percentage of positive tests is also climbing,” she said. “In full protection of our district staff and students, we have decided that beginning with online instruction and closely monitoring the health data as October 5th approaches will be our best next step.”

Santa Ana Unified’s starting date of Aug. 10 is less than a month away, which put additional pressure on the district to make a decision. “The district will pivot entirely to distance learning to start the upcoming school year out of concern for the safety and well-being of the entire school community,” Superintendent Jerry Almendariz explained in a video message. “This decision comes as the number of COVID-19 cases throughout Santa Ana, and across California and the rest of the country, continues to climb at an alarming rate. Thus, a full distance learning model is the safest option for our Santa Ana students, parents, and staff.

Some districts planning to be mostly online this fall might also bring in smaller groups of high-needs students to school to try to limit the learning loss that has been a major concern since the start of the pandemic—but only if it is safe to do so.

Other school districts, including some of the state’s largest, are still planning to offer what is called “hybrid instruction,” which involves a mix of distance learning and in-person instruction.

For example, Elk Grove Unified near Sacramento, the state’s fifth-largest district, announced last week that it will offer two models for the fall term — “transitional learning” and “full distance learning.” The transitional learning approach, the district’s superintendent Chris Hoffman explained in an online letter, refers to “in-person instruction to the greatest extent possible under existing health conditions and guidelines regarding social distancing, sanitation, and personal protective equipment.” Distance learning will be “a balance of live, virtual instruction and recorded, previously posted lessons.”

Long Beach’s Baker said the decision this week by neighboring Los Angeles Unified and San Diego Unified to open schools via distance learning did have an impact on her district’s decision, but it wasn’t the only factor.

“We pay close attention to the decisions of other districts, but we always filter the decisions of others through the needs of our community,” she said. She also tried to reassure parents that the district’s online curriculum, which would include daily live lessons, grading, and attendance would be “more intense and consistent” than what students experienced following the district’s rapid closure in the spring.

State superintendent Thurmond said he applauded districts for making the decision to start the school year with distance learning. “We know, for example, in the case of Los Angeles County, the data shows that the rate of case infection is quite high, much higher than in many other communities. And so, we applaud the superintendent and the school boards in Los Angeles and San Diego for making the decision to say let’s open safely.”