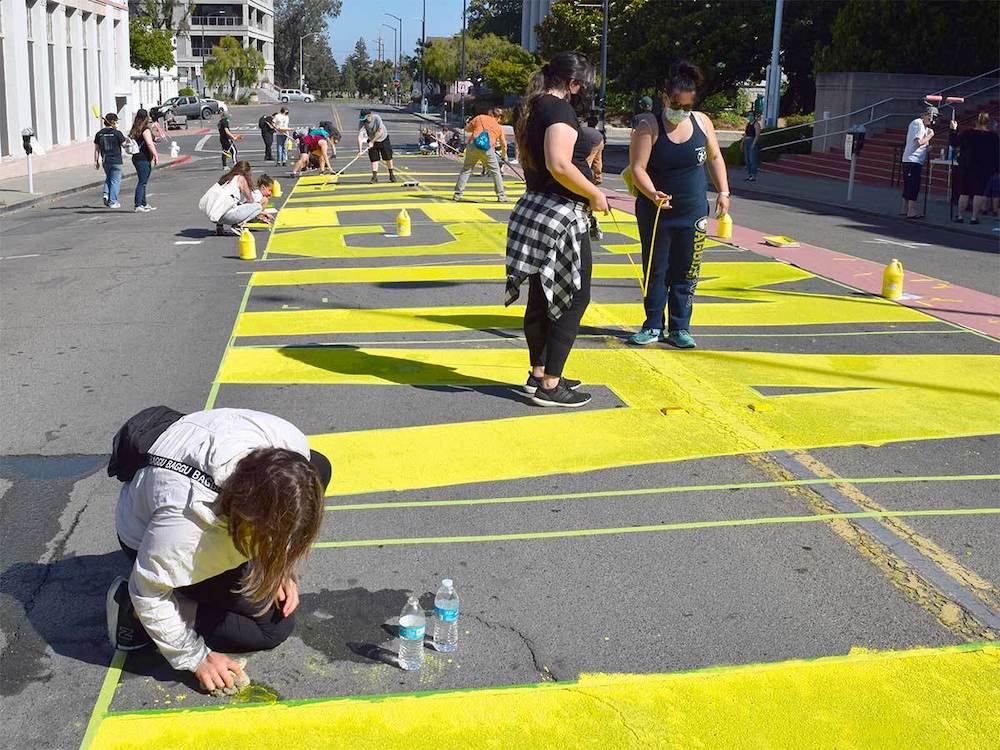 Rachel Deikman on Saturday took her two young children to a real-life civics lesson, helping paint the words “Black Lives Matter” on the street in front of a Contra Costa County courthouse in downtown Martinez.

When asked why they were there on a beautiful sunny morning, 6 1/2-year-old Dahlia Deikman said emphatically, “Because we think Black lives matter!”

Added her mom, “It’s important for us to come together as a community.”

Not everyone in Martinez Saturday was on board with the Black Lives Matter movement, however — a point made clear by a man wearing a red “Make America Great Again” hat and a “Four More Years” T-shirt, along with a woman who tried to cover up the letters in the word “Black” using black paint and a roller. On a video, the woman said, “This is not happening in my town” as she applied the black paint. The two were chased away after a few minutes, and the mural restored a short time later.

A witness gave police a photograph of the suspect’s vehicle which was described as a Nissan pickup truck with the word “NICOLE” on the right side of the tailgate in silver lettering. The truck has a camper shell and the license plate is 52701B1.

‘Hostility in an ugly form’

“What happened yesterday to deface that mural was hostility in an ugly form,” City Councilwoman Noralea Gipner said Sunday morning on social media. “Permission was given to put that there but permission was not given to deface it.”

Police said it appeared the couple came to the location “with the specific purpose of vandalizing over the mural,” noting that “The community spent a considerable amount of time painting this mural only to have the suspects destroy it by dumping and rolling paint over part of the message.”

“The community spent a considerable amount of time putting the mural together only to have it painted over in a hateful and senseless manner,” Police Chief Manjit Sappal said in an announcement. “The City of Martinez values tolerance and the damage to the mural was divisive and hurtful. Please help us identify those that are responsible for this crime, so they can be held accountable for their actions.”

More than 100 people — all wearing masks and almost all showing concern for social distancing — had helped paint the words over a five-hour period Saturday. This “public art project” was organized by the local group Martizians for Black Lives, which asked the City of Martinez’s Recreation Department for permission to do the mural. It is patterned after similar paintings in many cities across the United States, including Oakland and San Jose.

Justin Gomez of Martinez, a lead facilitator for Martizians for Black Lives, said the project came together quickly. It was spurred not only by the similar murals in other cities, but by the discovery by two people June 28 of anti-Black Lives Matter fliers about a half-block apart on a residential sidewalk near downtown Martinez. Those fliers ignited a community-wide discussion of how people are treated.

“People have now seen racism in their community; now we have to confront it,” Gomez said as dozens of people used rollers to apply yellow paint to the street in front of the Justice Wakefield Taylor Courthouse a few feet away.

Rachel Deikman, a Martinez resident, agreed. “Black lives are marginalized, and there needs to be a difference made,” she said. “And now’s the time.”

A system with ‘millions of little systems’

It was no accident the big yellow letters “Black Lives Matters” were applied in front of a courthouse, Gomez said. He said the legal system is a “gateway to mass incarceration” that has disproportionately made Black people and other people of color victims, and has helped perpetuate institutional racism.

“The ‘system’ is made up of millions of little systems,” Gomez said. “We have to look locally first.”

He said he has been heartened by the swift denunciation of the racist fliers by local elected and civic leaders. One of those leaders was City Councilman Mark Ross.

“Our town will not be deterred, and such hateful acts will only coalesce us as the kind and forward leaning community we are,” Ross wrote on social media the day after the fliers were reported.

Getting the street mural approved so quickly, Gomez said, is further proof the city is committed to addressing the issue.

As of early Sunday afternoon, the one block of Court Street was still blocked off, the mural intact, now surrounded by dozens of chalk images.

But Gomez said that, at the end of the day, the message on the pavement is simply words, which probably won’t last all that long.

“What we’re really advertising for, what we really need, is a shift in racist policy,” he said. “Some people will never listen. But if we’re not doing things like this, we’ll never have the conversation.”

Jordan Felix, a Martinez native now living in Austin, Texas, was back in town this weekend visiting friends. He said he was happy to be in front of the courthouse Saturday painting, and happy with Martinez’s response to the local and national issue.