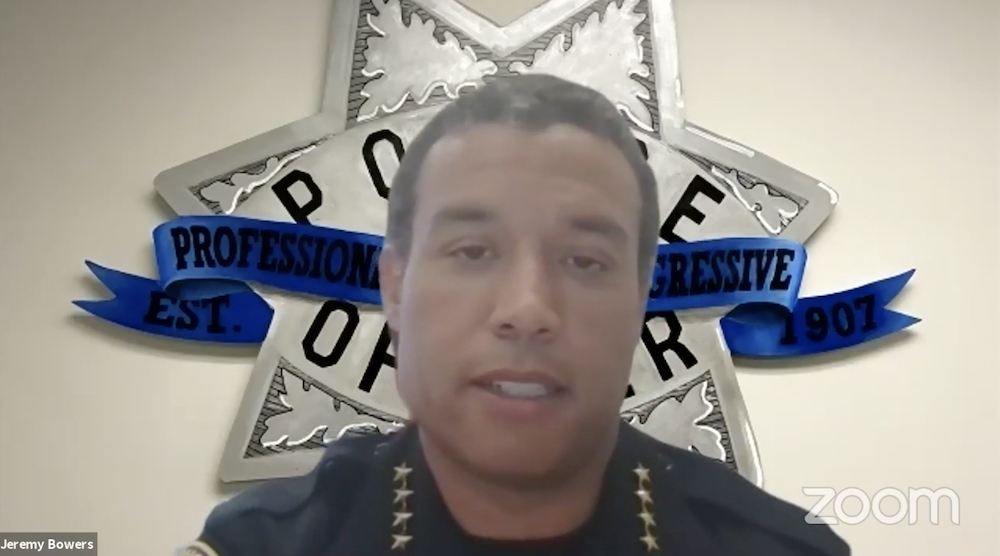 Piedmont Police Chief Jeremy Bowers and California Department of Justice attorney Nancy Beninati took a deep dive into the pressing issues of social justice and police reform, examining data and some of the state and local initiatives being used to address them.

Talking to viewers in a Zoom event hosted by the Piedmont League of Women Voters on June 30, Chief Bowers said his job as chief is to “look inward and make careful assessments to make sure that we are employing policies, procedures, and training that support the safest possible outcomes for the public.” He believes that what occurred to George Floyd wasn’t a standalone event, but rather something that is indicative of a history of a misuse of power and racial inequality.

Following the 8 Can’t Wait “campaign to bring immediate change to police departments,” PPD has permanently banned the use of the carotid restraint, a dangerous stranglehold. Furthermore, in the case of an office- involved shooting, the Sheriff’s office will come in as an independent investigative body as opposed to the department investigating itself, to determine whether the use of deadly force had a just cause.

When Piedmont officers were dispatched to Oakland during the George Floyd protests to help deal with the rioting and looting, no Piedmont officer used force against any protesters. Going forward, Bowers will only continue to dispatch officers to Oakland if he is confident those departments are following similar “8 Can’t Wait”reforms.

Likewise, here in town, the PPD dispatcher will now only respond to calls that detail suspicious activity. They reserve the right not to investigate the situation if a person is only being reported because they “look suspicious.” Callers must provide more information than “they look like they don’t belong here.” Currently, Bowers is working on making Piedmont data surrounding how many of their dispatches are based on racial bias available to the public.

On a state level, Nancy Beninati spoke of what the Department of Justice is doing to further constitutional policing. The reform efforts are being pursued through investigation, collaboration, community outreach, and education, and by working with the California Commission on Police Officers Standard and Training (POST).

The Racial and Identity Profiling Act (RIPA) has been created to begin the process of ending racial bias by the police. This act requires law enforcement agencies in California to collect demographic information on every stop made by an officer. A “stop” is a lawful detention or search. Demographic information based on the perception of the officer is collected; this includes race, ethnicity, age, and sexual orientation.

According to Nancy Beninati, last year’s RIPA data showed that, “African American individuals were being stopped and searched at a greater rate than white Americans, but were less likely to have contraband found on them as a result of the searches.” African Americans make up 6.3% of the population, but were stopped 15.1% of the time. Moreover, an African American is 2.9 times more likely to get searched relative to their white counterparts.

The speakers said there are many things Piedmont residents can do to continue police reform: Attend community meetings, suggest ideas for improvements on the PPD website, demand public records transparency, file a citizen complaint if unfairly treated, look at OpenJustice data, and provide comments after reading RIPA reports and listening to their board meetings.

According to the LWV website, the event was attended by over 65 community members and concluded with a question and answer session. A recording of the livestream of the event is available here.

Police Chief Jeremy Bowers answered more questions after the June 30 event. A recording of that conversation is available on the LWV YouTube channel.