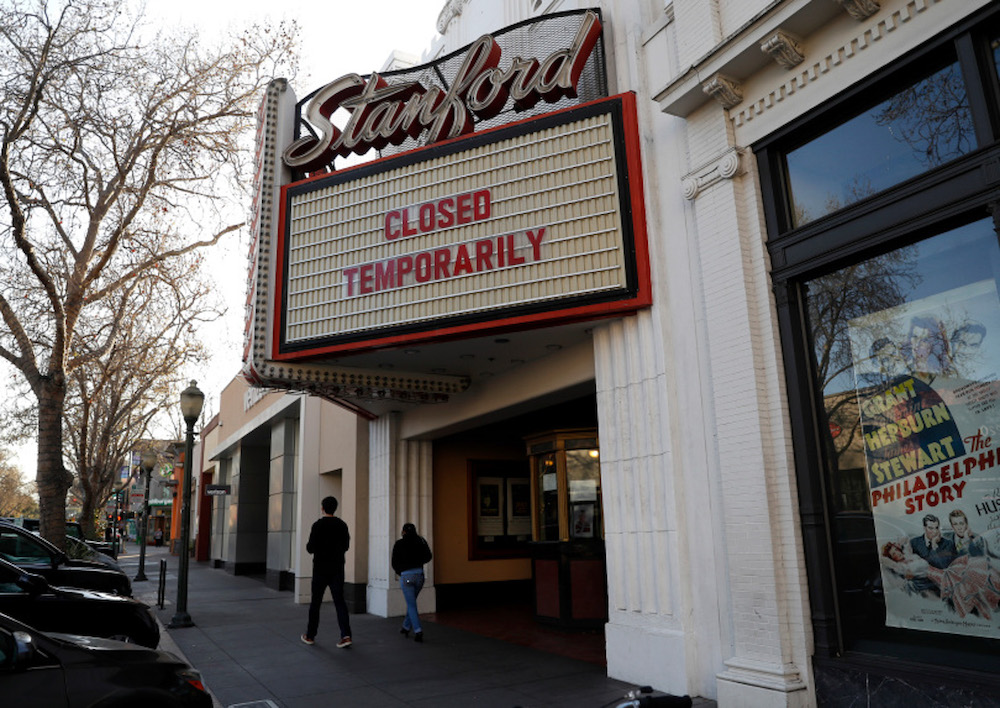 A sign outside of the Stanford Theatre announced its temporary closure in downtown Palo Alto on March 4, 2020. Photo by Nhat V. Meyer, Bay Area News Group

Beaches and bars were just the beginning. California Gov. Gavin Newsom today ordered indoor portions of restaurants, entertainment centers, museums and other businesses in counties with growing coronavirus outbreaks to shut down for at least three weeks.

As the Fourth of July weekend approaches, the indoor facilities must close in 19 “watch list” counties that are home to 72% of the state’s population.

Bars in those counties must close all operations, and many state beach parking lots also will be shut down this weekend, Newsom said.

“We have specifically targeted our operations to close indoor operations,” Newsom said during a press briefing today. “This doesn’t mean restaurants shut down.”

Counties are added to the watch list when they exceed metrics that indicate that they have rising numbers of infections and hospitalizations. All counties under the new restrictions had been on the state list for at least three days.

On Tuesday, the state recorded 5,898 new cases, and California’s positive test rate has surged to 6.4% in the last week, up from 4.4 in mid-June.

In addition to the new closures, Newsom said seven state agencies are convening new “strike teams” as part of stepped-up enforcement efforts for businesses operating in violation of health orders.

“When people just thumb their nose, turn their back and put your life at risk, put their workers’ lives at risk, that’s why we have rules,” Newsom said. Of individuals who wear face masks as mandated by the state, he said, “It’s a sign of someone who gives a damn.”

The announcements follow several days of warnings about more aggressive state action to curb record numbers of COVID-19 infections in the past week, which have pushed the state past 6,000 deaths and more than 23,000 cases. On Sunday, the governor began “toggling back” some local reopenings by ordering bars to close in seven counties, including Los Angeles, and recommending that others on a growing state watch list do the same.

Local governments around the state have responded with a patchwork of closures during what is usually the summer’s busiest weekend.

Many residents are confused by the patchwork. In Los Angeles County, beaches will be closed from Friday through Monday. Next door, in Orange County, which previously attracted the governor’s ire for beach crowding and has emerged as a hotbed for backlash against health officials, most beaches are open, including popular Huntington Beach and Newport Beach. However, the city of Laguna Beach cancelled July 4 fireworks and closed its beaches, albeit only for the holiday on Saturday. San Diego is so far keeping beaches open but has implemented some restrictions on parking and indoor structures at area parks.

The new order means that no indoor dining rooms are open in Southern California for the next three weeks except in San Diego County.

Testing is also an ongoing area of concern, after Newsom reported a drop to 87,000 COVID-19 tests on Tuesday from some 105,00 tests on both Sunday and Monday. The state is also “pausing” a multi-million dollar test expansion effort in under-served rural towns and inner-city neighborhoods, the Los Angeles Times reported Wednesday, due to the program’s high costs.

The new closures illustrate growing geographic divides in the pandemic’s California toll. Hospitalization rates are growing quickly in southern counties, including Imperial, San Bernardino and Los Angeles, the latter of which now accounts for nearly half of all cases statewide. Rural Central Valley counties with limited health infrastructure, including King, Stanislaus and San Joaquin, are also among those with the highest per-capita hospitalization rates and suspected new cases, a CalMatters analysis of state data shows.

In Northern California, where hospitalizations are still rising but at a slower pace, beaches have largely reopened in Santa Cruz and Marin counties, so long as visitors keep their distance. Some jurisdictions have voluntarily slowed or “paused” reopening plans, including more densely populated San Francisco, Alameda and Sacramento counties. Bars in the state capital were also ordered closed on Monday, and of particular concern in the Bay Area is a spiraling outbreak at San Quentin State Prison, where more than 1,000 cases have overwhelmed the health system.

“None of this should surprise any of us,” Newsom said. “As we reopen our economy, as more people mix, we’re going to see an increase in spread.”

Before Newsom announced the new restrictions today, he also extended some programs to ease the harsh economic toll of the virus, though largely keeping with a strategy to leave it up to local officials to decide what to ultimately implement.

Among the new authorizations in the executive order signed Tuesday night are the option for local governments to halt evictions for renters impacted by the COVID-19 pandemic through Sept. 30 — a move that housing advocates say is necessary to prevent a wave of mass displacement in high-cost areas. The measure also extends remote marriage and drivers license options, waives some Medi-Cal eligibility reviews and lengthens the window for confirmation of some state appointees.

Some 16 million Californians — more than half of all adults in the state — have seen their income fall since shelter-in-place orders in mid-March, according to a Census Bureau survey last month, which has strained state safety-net programs for housing, food and unemployment benefits.