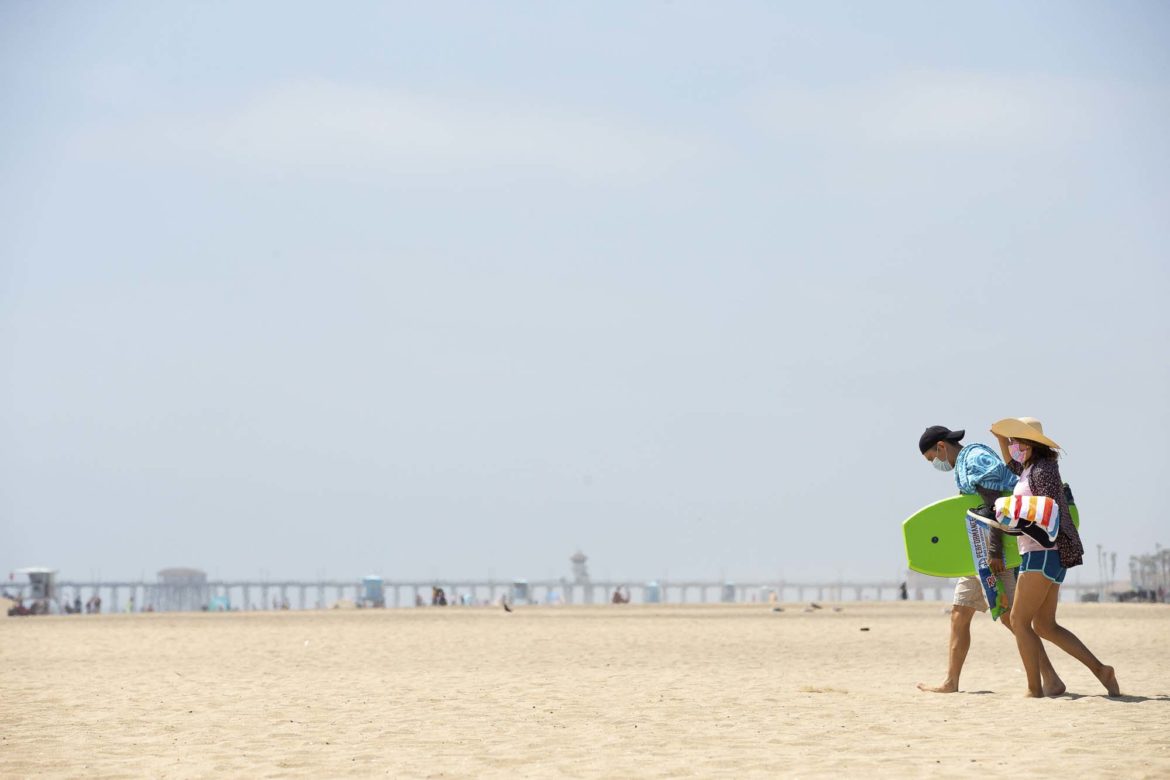 While parking lots remained closed at Huntington Beach State Park due to COVID-19, the beaches opened to the public for limited activities, May 8, 2020. Photos by Lisa Hornak for CalMatters.

Big barbecues, parades and gatherings aren’t likely in the cards this Fourth of July.

Gov. Gavin Newsom on Tuesday announced plans to tighten the state’s stay-at-home order before the holiday weekend, with specific details to come today. He’ll also reveal how the state is ramping up enforcement of his order requiring all Californians wear masks in public places.

Several counties have already characterized Fourth of July as a “do-or-die” moment in the battle against coronavirus, with Los Angeles closing beaches and banning fireworks displays, the Bay Area canceling fireworks shows and parades and Sacramento public health officials warning residents to avoid gatherings and watch fireworks from their cars.

Meanwhile, Newsom said four more counties will likely land on the state’s coronavirus watch list. There were 19 counties on the list as of Monday.

Newsom also said Tuesday the state has moved an estimated 14,200 homeless Californians into hotel and motel rooms amid the pandemic. He spoke in front of a motel in Pittsburg, Contra Costa County, and was at times drowned out by Black Lives Matter protesters calling for redistribution of police department funds to homelessness, mental health and health care programs.

The coronavirus bottom line: As of 9 p.m. Tuesday night, California had 222,917 confirmed coronavirus cases and 5,980 deaths from the virus, according to a CalMatters tracker.

The budget agreement Newsom struck with lawmakers calls for passing a new law ensuring more workers can regain their jobs after taking paid family leave, marking the second year in a row the governor has used budget negotiations to push a “parents’ agenda” developed in conjunction with his wife Jennifer Siebel Newsom and Chief of Staff Ann O’Leary, CalMatters’ Laurel Rosenhall reports.

The proposed law would require companies with at least five employees to protect the jobs of workers who take family leave to bond with a baby or care for a sick family member. It’s opposed by many business groups, who say it will further burden employers already hamstrung by the pandemic. But for millions of workers paying into a system they could be fired for using, it’s a step in the right direction.

California’s powerful state construction workers union on Tuesday apologized for and removed a Facebook ad featuring state Sen. Scott Wiener after Jewish state lawmakers said it evoked anti-Semitic tropes, CalMatters’ Matt Levin reports. The ad, designed by the State Building and Construction Trades Council, depicted the San Francisco Democrat clutching a handful of Monopoly money in front of a game board reading “NO on SB899.” The bill, sponsored by Wiener, would expedite low-income housing development on property owned by religious organizations — and is opposed by the union because it doesn’t require union workers and wages be attached to the projects.

Pressure is building on the state Supreme Court to resolve whether voter-initiated ballot measures to raise taxes need to be passed by a simple majority or two-thirds vote in order to take effect. On Tuesday, a California appellate court ruled that San Francisco did not break the law by allowing a 2018 ballot measure that increased business taxes for homeless services to pass with a simple majority of the vote. The court sided with the city’s argument that initiatives placed on the ballot by citizens only need a simple majority to pass, while those placed by lawmakers need two-thirds to pass. However, two other lawsuits are pending in appellate court.

San Francisco isn’t the only city grappling with how many votes are needed for a new tax to become law. The state Supreme Court’s eventual decision could unlock millions of dollars for cities across the state and lower the bar for citizen- and special interest-backed tax increases in the future.

How a PG&E contractor with a sketchy past made millions off California’s deadliest fire. // ProPublica

U.S. Rep. Katie Porter of Irvine is quickly becoming a power broker in the House of Representatives. // Orange County Register