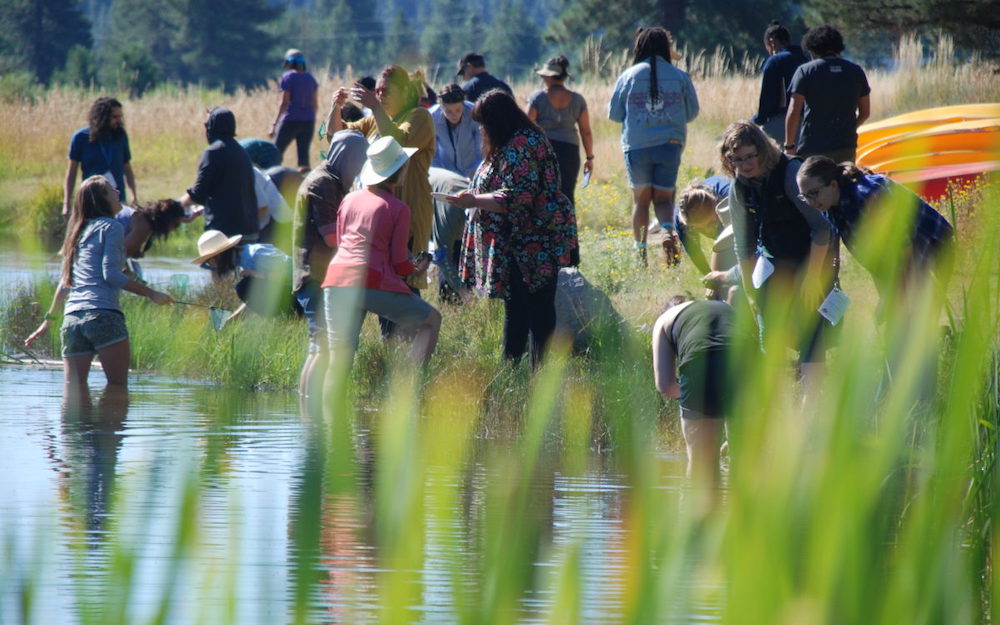 Many outdoor education programs in California have shut down in the wake of the coronavirus pandemic, potentially eliminating science instruction based on exposure to natural environments for some students in the coming school year.

At the same time, a growing body of research has shown evidence of uneven access to distance learning, especially among English learners and low-income students. Now, some districts are discussing how to take lessons outside to mitigate the loss of hands-on science experiences while opening the classroom beyond four walls where students can keep at least six feet apart while learning outdoors.

“Distance learning was not serving our students, and I’m concerned these are irreparable losses academically and social-emotionally,” said Vanessa Carter, the environmental literacy content specialist for San Francisco Unified. “Rather than continuing what we know doesn’t work, I want to get creative. One way to safely get kids back to learning is using our outdoor spaces.”

It’s estimated that more than 4 million students could miss out on nearly 9.5 million hours of science and environmental education in California due to program closures during the pandemic, according to a recent policy brief from the Lawrence Hall of Science.

Outdoor education programs, such as residential outdoor science schools, science centers and museums, have been slashed during the pandemic as facilities shut down and schools switched to distance learning to prevent the spread of Covid-19. In California, 37% of these programs said they will remain closed due to lack of financing, the policy brief shows.

In 2013, California adopted the Next Generation Science Standards, which include climate change and environmental science. Outdoor education, such as teaching in the school yard, field trips and residential outdoor science school, is also explicitly mentioned in the California Science Framework, which offers teachers guidance on how to implement California’s new science standards.

Closing these programs means losing a significant portion of some students’ exposure to various science topics and hands-on activities, which is a core component of the new standards. Carter and other advocates for outdoor learning say incorporating outdoor lessons into the fall curriculum could alleviate that loss while also giving students a socially-distant opportunity for hands-on learning.

“San Francisco is ripe for this,” said Carter, adding that most campuses are within a 10-minute walk from a park if they don’t have their own green schoolyard.

Carter is working with local environmental agencies and nonprofits such as the Golden Gate National Parks Conservancy, San Francisco Recreation and Parks Department and Literacy for Environmental Justice about ways to bring science lessons to students who are on campus this fall and must social distance.

One idea is to bring in outdoor educators who lost their jobs when programs were canceled in response to the pandemic. Schools can bring them in to share their expertise by working with students on playgrounds, in school gardens or at nearby parks.

In California, it’s estimated that at least 5,000 employees at outdoor education centers were laid off or furloughed since March, and 30,000 nationally, the brief shows.

“There is this interesting phenomenon where we have all of these incredible outdoor educators who are dying to go back to work. Many of them are on unemployment because their revenue dried up overnight,” Carter said. “So this wacky idea is let’s pair all of those people with schools, so they can be these experienced comfortable educators outside.”

Part of the appeal for outdoor learning is that transmission of the virus is less likely outside, where air particles can disperse and people can more easily distance themselves from each other. The coronavirus spreads mainly from person-to-person contact between people within about six feet of each other, according to the California Department of Public Health.

Other districts across California are looking into similar ideas, such as Palo Alto Unified and La Honda-Pescadero. Elsewhere, places such as Scotland have been experimenting with ways to grow outdoor programs as an alternative to online learning for its littlest learners, for example.

“There are a growing number of fully and partially outdoor child care settings in Scotland,” Scotland’s children’s minister, Maree Todd, told the Guardian in May. “This model could have many benefits for maintaining physical distancing and minimizing risk of transmission as part of the transition from lockdown back into early learning and child care and school.”

Students who might not be able to otherwise afford pricey summer camps or lack green spaces in their community are particularly at risk of missing out on science education as camps and programs close, Carter said. Outdoor education leaders estimate that 58% of the youth impacted by the pandemic cancellations qualify for free or reduced-price meals, are English learners or come from other marginalized communities, the brief found.

“It’s important to note the trauma being experienced by children,” said Gerry Salazar, program director for Camp Skyhook, a free five-day overnight program in the Angeles National Forest run through Los Angeles Unified School District. The program is open to any fourth- and fifth-grade student in Los Angeles Unified. However, there’s currently a six-year waiting list for schools hoping to send their students.

More than 70% of participants have had limited or no experience in natural environments such as the mountains, oceans or national parks, according to data provided by Camp Skyhook. Around 72% of students who have attended Camp Skyhook are English learners, and 82% participate in free lunch programs at school.

In addition to the academic programming, such as science standards-aligned curriculum, that programs like Skyhook provide, Salazar said time outdoors is even more crucial for children who are facing increased stress during the pandemic.

“The reason outdoor programs are transformative is due to their ability to distract and focus the mind,” Salazar said. “Access to natural spaces is therapeutic, provides a sense of peace and healing. It provides a three-dimensional affirmation that everything is going to be alright.”

Camp Skyhook plans to eventually re-open despite setbacks during the pandemic, and staff for the program have since transitioned to working at Los Angeles Unified grab-and-go meal sites. But many other programs aren’t as lucky.

Nationally, outdoor education program leaders expect to face over $600 million in lost revenue by the end of 2020, the survey found, and 30% of programs reported they are either definitely unable or very unlikely to reopen.

One of those programs is Rancho El Chorro, an outdoor education camp that served around 7,000 students annually in San Luis Obispo.

Program director Celeste Royer was shocked and disappointed when she found out that she would need to lay off her entire staff, which included six full-time instructors. The program recently completed its 49th year of operation before finding out that the county office of education, which owns the facility, would be ending the program due to lack of funding.

“We will have to look for different models to fund outdoor education for all,” said Royer, who is retiring. “How can we support kids getting out into the natural environment and how to teach outside of the confines of a four-wall classroom? That’s one of my hopes — that we look ahead to how everyone can value outdoor and environmental education.”

In San Francisco, Carter is facing hurdles as the district shapes up plans for increasing outdoor learning during the pandemic, from teacher buy-in to district approval and ongoing funding, which has recently been cut from her program.

“I don’t pretend this will be easy. If we have a bad fire season, all of this will be for nothing,” Carter said. “But I have to believe that the administrators making these decisions understand all of this and feel concerned about it.”