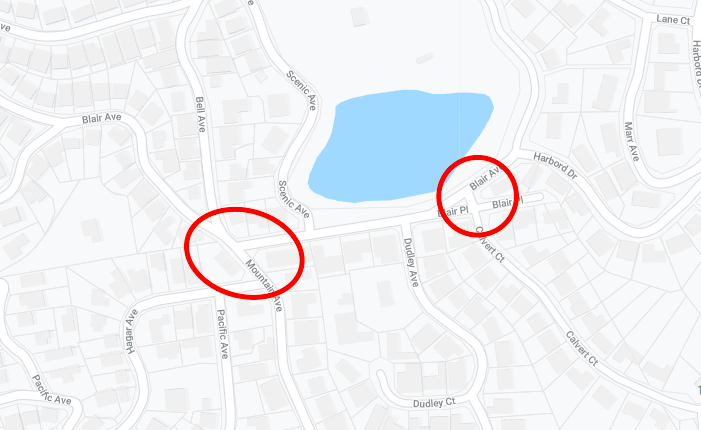 A pair of residential burglaries took place on Blair Ave. in Piedmont recently. One took place at a house on the corner of Blair and Calvert Court on the afternoon of July 7. Police were called at 2:12 p.m. for a burglary in progress.

According to Piedmont Police Department Captain Chris Monahan, the victim came home during the burglary, finding items scattered around. The suspect fled out a shattered glass rear sliding door.

The suspect was described as a male, about 6-foot-4, unknown race wearing black clothing and a hat.

“The total amount in loss is unknown at this time, but estimated to be in the thousands,” Captain Monahan said. “Victim will provide a detailed report of stolen items in the coming week.” [Editor’s note: The homeowner posted in a Facebook group that a glass sliding door to an office was shattered and the suspect took cash, gold, jewelry, and laptops. Their dog had been forced into a bathroom.]

Monahan added that “Blair and Calvert is on the list to get license plate cameras in next roll out.  No timeline yet, but we are working on that project.”

Another burglary took place at Blair and Mountain sometime between July 3-6. A lower bedroom window was smashed and the house was “ransacked,” according to Captain Monahan. [Editor’s note: The homeowner posted a video on NextDoor of the alleged suspect on July 8, saying jewelry and cash were stolen.]

He said the Piedmont Police are working with the victims to identify the loss. Both cases are now with detectives.

[Editor’s note: As the Exedra was wrapping up Friday, an unconfirmed report of a robbery on Arbor between Jerome and the traffic circle was posted to a Piedmont Facebook page. According to the posting, the suspect stole a woman’s purse as she got out of her car, and ran towards Grand, escaping in an SUV. ]