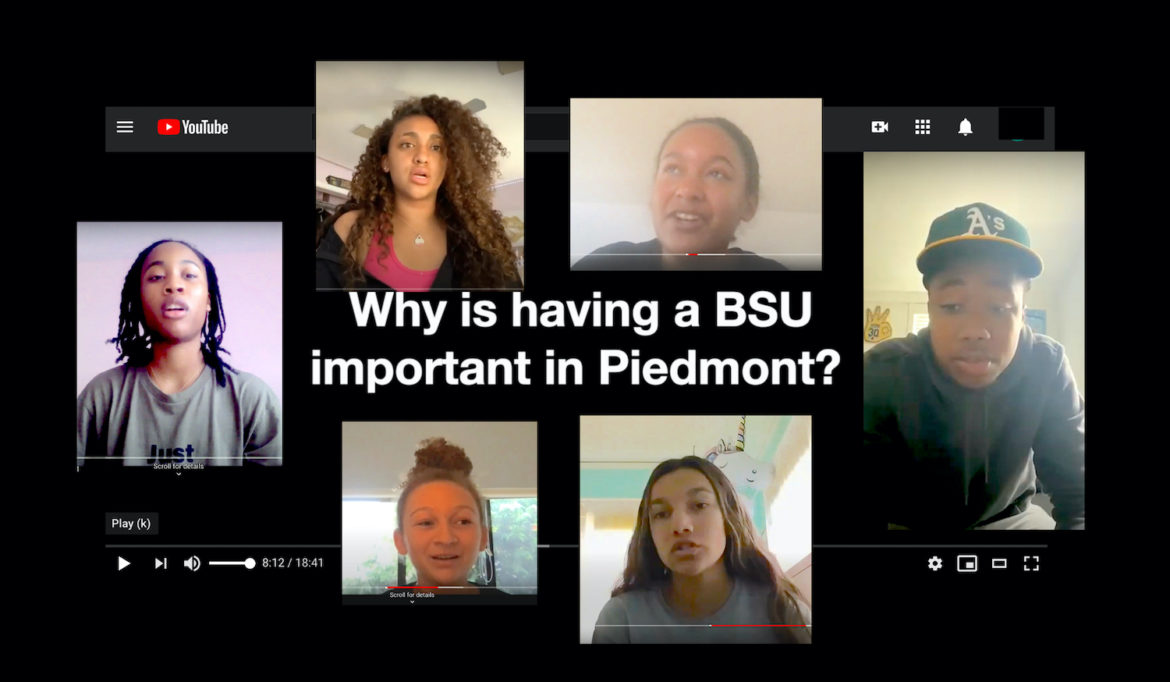 The idea to bring a fresh start to the Black Student Union (BSU) at Piedmont sparked during a casual conversation among students earlier this year. They sought advice from PADC and then PUSD, who recommended the students reach out to administrators Cheryl Wozniak and Ina Bendich to serve as facilitators. Wozniak and Bendich, it turns out, were having similar thoughts about reviving the organization. Thus BSU, which had been active back in 2016 and 2008, was reborn.

“I know the power of what young people can do if you give them the opportunity,” said Bendich, who took on the role of club advisor.

In Piedmont, there is still much work to be done. Recent PHS graduate Maddy Meadows spoke about the racist misconception that PHS students who are Black must not live in Piedmont and therefore attend MHS. She recalls being asked if she went to MHS very often.

“I felt irritated because the the message behind it is, ‘Because you’re black, you’re not good enough to live in Piedmont,’” Meadows said.

With goals of educating and creating community, BSU is open to all PHS and MHS students, regardless of race or ethnicity, although most current members are Black students.

“It’s important for people who aren’t Black to be a part of BSU, too, because if you are not Black and a part of BSU, you get amazing exposure that can help you be an active ally,” said rising MHS senior Harmonee Ross.

Before SIP, meetings were about delving into conversations, organizing elections, planning trips to museums, and brainstorming events to celebrate Black History Month.

Since then, members have not let the lack of in-person school deter them. Working online from their own homes, BSU created a mini-documentary about the experience of Black students in Piedmont, making sure to have individual questions for each interviewee.

“I wanted to really honor them being vulnerable by giving them thoughtful and impactful questions,” said Ross.

BSU has since presented the video to the Board of Education at the June 10 meeting. “The video gave [BSU members] the platform, and now people are asking for them to participate in other things,” said Bendich.

Piedmont Education Foundation (PEF) has asked some of the featured students to speak later this summer. Rising PHS senior Anjuli Turner and Ross represented BSU when they spoke at the Piedmont for Oakland Public Schools (POPS) launch event in June. And, BSU members have been working with Havens Elementary to create a mentoring program.

Still, there is no question that in-person school would have been preferable, especially considering the recent activism in Black Lives Matter movement.

“If we were still in school, BSU would have gained a lot from that because [police brutality] is something that people would have been very vocal about” said rising MHS senior Amari Marshall.

Marshall, Ross and Turner, among other students featured in the video, express the isolation and frustration they feel with the perceptions of other Piedmonters.

One of the goals of the BSU is to help make Piedmont “anti-racist,” says Turner who is interviewed in the video.

People say “I’m not racist,” she elaborates, but their actions say otherwise. Or, they think the problem is in Oakland, not in Piedmont. “Piedmont — [you] need to wake up.”

The current leaders of BSU are doing everything they can to ensure the longevity of the club, and hope to sustain it for the students yet to come.

“I want BSU to get the exposure it deserves as a club, not just as a group of Black people,” said Ross. “I would like to think that if there was an incoming freshman, and they were Black, or half Black, or 0.5 percent Black – we don’t really care – that they would hear about BSU and immediately want to come.”