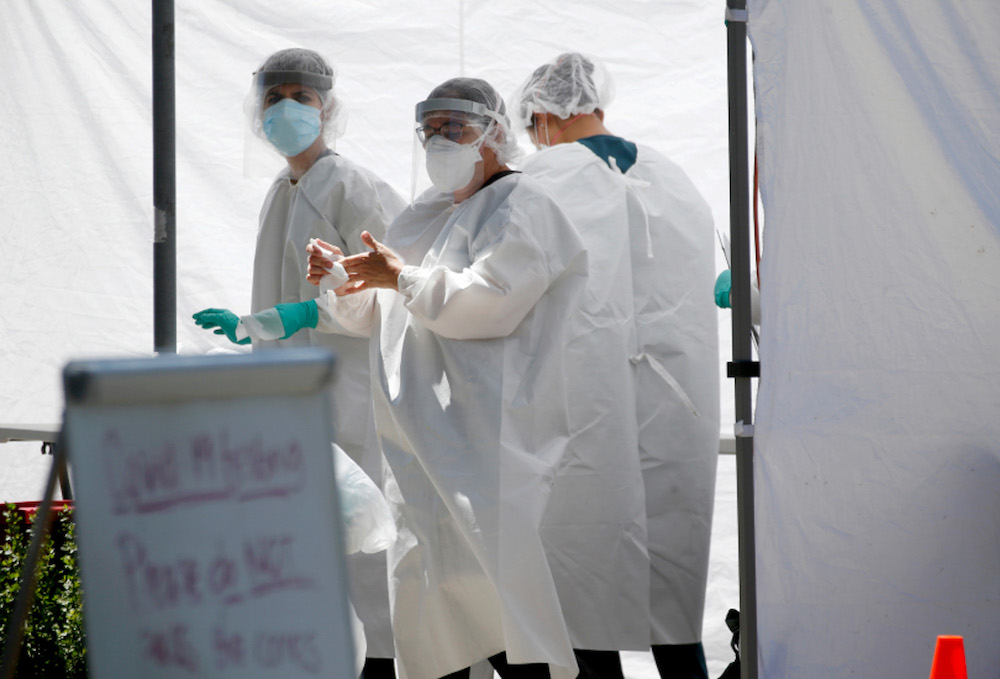 A Clinica de la Raza staff member sanitizes her hands after administering Covid-19 tests in a parking lot along 35th Avenue near the Fruitvale BART station in Oakland on July 7, 2020. According to data provided by the Alameda County Public Health Department, Fruitvale’s 94601 ZIP code has one of the highest rates of COVID-19 cases of any ZIP code in Alameda County. Photo by Jane Tyska, Bay Area News Group

Gov. Gavin Newsom tried to reassure Californians Wednesday that “we will get through this,” despite an alarming surge in the state’s coronavirus cases and hospitalizations.

The governor noted that the state is testing more than 100,000 people each day and has the capacity to treat as many as 50,000 patients at a time. He focused on state and local public health officials’ enormous efforts in recent months to bend the coronavirus’ deadly curve, including amassing large stocks of protective gear for health workers and setting up field hospitals.

But after being the first state to impose a stay-at-home order, California faces a battery of grim statistics as the state reopened – and now is poised to potentially send millions of children back to school next month.

Containing the virus in a state as large and populous as California was always going to be a massive undertaking, requiring planning for counties with more than 10 million people, such as Los Angeles, and those with just over 1,000, like Alpine County to the north.

Epidemiological models for California suggest that COVID-19 cases, hospitalizations and deaths will continue to rise statewide in the short term. The daily number of people who need to be hospitalized, now standing at nearly 6,000, could rise to more than 16,000 by Aug. 7, straining hospitals in the state’s hot spots for COVID-19 outbreaks.

Although Newsom on Wednesday compared California’s  7.1% “test positivity rate” – a measure of how widely the virus is circulating – favorably to those of other states like Arizona, California’s rate once again is on the rise after hovering under 5% through much of June. He acknowledged that “every decimal point is a point of concern.”

Newsom said the surge in cases has been driven in large part by a lack of people wearing masks and keeping an appropriate distance, mixing of different households and outbreaks in prisons and among essential workers.

Nursing home residents also have been devastated, with 14,646 total cases as of Wednesday, up about 7% since June 30. More than 2,600 have died. The workers who care for them also have been hit hard, with more than 9,600 stricken, 96 fatally.

Testing has re-emerged as a huge challenge, even as most public health officials believe it, along with contact tracing, is critical to containing the virus.

In the past six months, California has boosted capacity to as many as 103,000 COVID-19 tests each day, a significant jump from the March goal of 8,000 daily tests.

But with growing delays in test results from overwhelmed labs and test sites closing over supply shortages, public health officials on July 4 asked California laboratories to prioritize patients with symptoms and those in hospitals, nursing homes or prisons.

Newsom said Wednesday the state would be rolling out a new testing strategy in coming days.

Sacramento County, for example, is closing five testing locations because UC Davis Health, which processes tests for these sites, is unable to get sufficient test kits from its manufacturer, a UC Davis Health spokesperson said.

In Santa Clara County, local public health officials were concerned enough about testing capacity that they recently ordered local hospitals and clinics to make testing more available and on Wednesday launched an online dashboard showing how private hospitals and clinics aren’t yet doing their share for their own insured patients, compared to the county-run free testing sites. The dashboard showed that while the county’s own sites ran more than 15,000 tests between June 25 and July 1, compared to about 5,300 conducted by HMO giant Kaiser Permanente, which insures and cares for about a third of the county’s residents.

“We wanted to be clear with health systems that they needed to step up to the plate to at least test their own members,” said Dr. Marty Fenstersheib, the county’s longtime former health officer and current testing czar. “We can’t maintain testing everybody in this county with our staffing and (lab) capacity. Everybody has to step up.”

And Californians remain worried. A new statewide poll, conducted in late June as COVID-19 cases were surging ever higher, found that 77% of Californians say they are concerned they or a family member will contract the disease. And 53% of those polled felt that the state was reopening too quickly compared to 43% three weeks ago, according to the poll conducted by Ipsos for the California Health Care Foundation.

From the beginning of the pandemic, Newsom and his team have pointed to hospitalizations and intensive care cases as key indicators of the state’s well-being and ability to reopen.

Those have been rising since mid-June. Over the last two weeks, hospitalizations spiked by 44% and ICUs admissions went up 34%. The state’s hospitals continue to work to increase capacity, but those in hotspots like Imperial County were forced to place patients in hospitals outside county lines.

After an early national shortage on tests and protective gear, Newsom touted the state’s expansion of testing and its ability to secure millions of surgical face masks and N95 respirators. The state succeeded to the extent it’s now sending masks to four other states, he said Wednesday.

But the California Nurses Association, which early in the pandemic rang the alarm on the shortages of protective gear for their members, said that while the situation has improved in some parts of the state, some nurses are still reporting that they can’t get a hold of a new N95 respirator every day.

Roberson said that the union has asked the state for more transparency about which hospitals are getting these masks.

Dr. Bob Bernstein, former health officer for Tuolumne County and a longtime epidemiologist for the U.S. Public Health Service, said California was able to initially bend its COVID curve because people “were largely adhering to the recommendations” to shelter at home, wear masks and wash their hands.

“Then there was an easing,” Bernstein said. “We’re not testing enough, public health departments are overwhelmed… We’re a diverse state and the consequences of that are that, overall, our situation isn’t as good as we’d like it to be.

“Newsom and the health officers are all advising the right things but not necessarily getting consistent cooperation.”