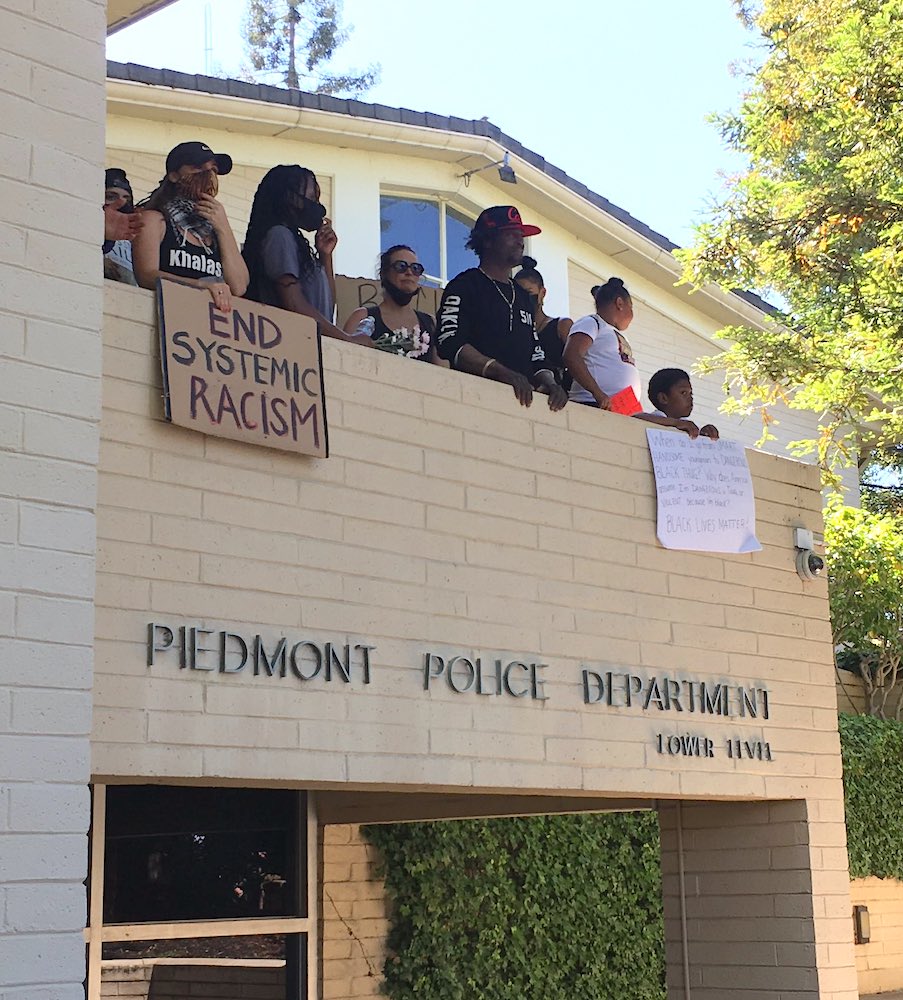 Protesters in front of PPD: "Turning the music up and showing Piedmont Police how Oakland does it" #oaklandprotests #blacklivesmatter #piedmont (Rene Morrison, Twitter)

Hundreds of people came out to protest racism and police brutality in Piedmont on the weekend of June 5-7.

The marches were just two of countless Black Lives Matter protests across the United States organized in the wake of a Minneapolis police officer killing George Floyd by kneeling on the unarmed black man’s neck for nearly nine minutes.

Captain Chris Monahan of the Piedmont Police Department said the protests were peaceful with no reported injuries.

“We support people’s right to peacefully and lawfully exercise their free speech rights,” Monahan said. “If there are ways to expedite that with permits and road closures, we’re supportive of that and will not intervene unless necessary.”

He added that it can be difficult to close roads without notice but that the police are working to maintain safety for everyone.

On the larger issues raised by Floyd’s death, Piedmont Police Chief Jeremy Bowers said, “I think the images of the officer’s knee on George Floyd’s neck brought some long-standing issues in this country to the forefront at a time when the public consciousness on equity issues was being raised as a result of the pandemic.”

“The killing of George Floyd precipitated by four officers was horrific and requires us as a police department to acknowledge it not just as a singular event, but as the latest example of a historical pattern in the misuse of force in our country.”

Monahan said there was a smaller group of protesters who came to Piedmont on June 4 as well. The group of four or five young women attempted to do some “chalk graffiti where the three flags are,” according to Monahan. “We asked them to stop,” he said and they left after some back and forth.

On June 5, several members of Piedmont Appreciating Diversity Committee organized a protest that attracted approximately 300 (Monahan stressed that the numbers are best guess estimates). The march started at Oakland and Highland, went down the hill toward Lake Merritt and then returned, according to Monahan.

The June 7 action attracted 300-400 people, and the marchers went to the main police building. Monahan said the group had broken off from a larger march in Oakland.

A curfew that was imposed in Piedmont on June 1 was lifted the morning of June 5.