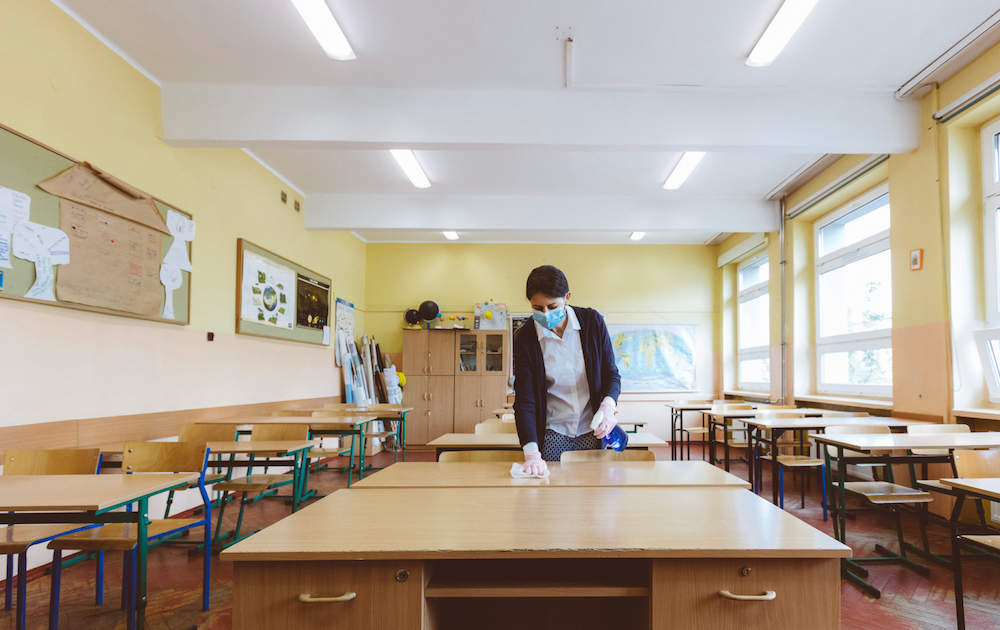 State education officials have said no plan will work for all school districts, so local officials have to figure out what works for their area. Image via iStock.

As California’s public schools near the sunset of a school year upended by a global pandemic, they now enter a frenetic summer of planning.

In Modesto, school officials have signaled that transportation under the age of social distancing would most likely mean school buses limited to 14 students, making it impossible to serve all students reliant on busing under normal times.

In Berkeley, the school board pondered logistical questions about what were to happen in the event that a student or employee were to test positive for coronavirus, while planning with the assumption that distance learning “will form the core of our educational programs for all students, at all grades.”

And in Los Angeles, guidance from the county’s education office envisions schools with one-way hallways, and class sizes limited to 16 students spaced six feet apart. Hand washing breaks would be squeezed in between lessons. No large gatherings, no assemblies. Recess and lunch would look different, too.

Guidance from Gov. Gavin Newsom, as well as from the state Department of Education, is forthcoming. In the coming weeks, California’s educators will try to answer one question: How will schools safely reopen campuses for students and educators in the fall?

Social interaction among peers and teachers, educators say, is just as much an integral part of students’ education as the learning that takes place inside California’s classrooms. This will make social distancing, they say, a tall task, if not nearly impossible, to enforce in school settings, and much more so without guidance and funding.

Across the state, many districts are surveying families, asking them to rate their preferences for on-campus and distance learning, share their health and safety concerns, whether they’d plan to send their child on a school bus and what could be improved under their distance learning offerings.

Like the spring of distance learning, the start of the 2020-21 school year will likely look different across California’s public schools and for its 6 million K-12 students.

Superintendent of Public Instruction Tony Thurmond said local districts and school boards will ultimately be responsible for determining their own instructional plans for fall. Thurmond said guidance that will be released by the state education department in early June will recommend students and staff wear face coverings at school.

School leaders say they’re itching for clearer direction from their local public health officials, which are expected to play a pivotal role in guiding schools’ reopening plans. Any guidance, however, will not be helpful if schools are expected to absorb significant funding cuts while tacking on the higher costs that will come with safely reopening schools, officials say.

Los Angeles Superintendent Austin Beutner and San Diego Superintendent Cindy Marten said “opening our schools will not be as easy as separating desks or placing pieces of tape on the floor.”

The leaders of California’s two largest school districts said in a joint statement that it will take more than guidance to safely reopen schools. Schools will need a steady stream of personal protective equipment for students and staff. More personnel will be needed to operate “hybrid” systems of in-class instruction and distance learning that many schools are pondering. Public health officials will need to set up a “robust system robust of COVID-19 testing and contact tracing” necessary to ensure students’ safety.

“Local health authorities, not school districts, have to lead the way on testing, contact tracing and a clear set of protocols on how to respond to any occurrence of the virus,” the superintendents said.

In Palos Verdes Peninsula Unified in Los Angeles County, school leaders expressed strong desire last week for physically reopening schools in the fall, with superintendent Alex Cherniss saying that “if we want to open school and have it be every day, we need to use (space) inside and outside.”

“We really need to start thinking about ways to offer class outside to maximize space,” he said at a board meeting, “or we’re only going to be able to offer staggered school or limited times.”

An education coalition representing labor groups, teachers, administrators and school boards estimate that education cuts in Newsom’s revised budget, which includes a 10% cut to schools’ main funding source, would equate to $1,230 less per student. With employee salaries accounting for an overwhelming majority of school budgets, advocates estimate that those cuts could mean upwards of 58,000 teacher layoffs to offset shrinking local budgets.

Those cuts, advocates said, fly in the face of the necessary logistics for physically reopening schools. Many districts are considering using a “hybrid” learning model in the fall to lower class sizes as part of social distancing.

Either scenario will likely require more teachers and personnel to sustain the schedules, and is unlikely to save schools money.

“If you have half the class in person, and half remotely, you can’t clone that teacher to be in both places to be handling both things at the same time,” said Celia Jaffe, president of the California State PTA. “Although some of these practices might be the right thing for the health of the students, there’s still going to be costs and concerns for the families.”

Reagan Duncan, an elementary teacher in the Vista Unified School District, said parents have begun to text her, asking if schools will be able to safely reopen, and whether online learning will be an option come fall.

Though her district has already placed orders for masks, gloves and sanitizers, Duncan said she is terrified at the thought of schools reopening without the necessary funding to secure protective equipment for kids and staff.

“We need those things to be able to open up properly,” Duncan said. “Those are things that we’ve been providing as teachers for years, but the amount that we’re going to need is almost insurmountable.”

Still, schools are bracing for the likelihood that distance learning will, in some form, remain part of their instructional game plans in the fall — either out of necessity to support hybrid scheduling or because some parents will be hesitant to send their students to physical campuses.

Thurmond, the state superintendent, said the potential enduring role of distance learning heightens the urgency to close a decades-long digital divide. Throughout the spring, many districts bulk purchased computers and hotspots for distance learning, and the state has made pleas to tech companies and philanthropists to chip in with donations.

According to the California Department of Education, more than 600,000 students lack access to a computer. Bridging that gap would cost about $500 million, “at minimum,” Thurmond said.

“These are numbers that may be hard to hear,” Thurmond said. “The reality is that we’ve had a digital divide in this country for far too long.”

Meanwhile, state lawmakers are considering putting a bond measure on the November ballot that would net between $4 billion to $6 billion to expand broadband access in rural communities and provide grants to schools for computers, hotspots and teacher training for online instruction.

“We’re trying to create an opportunity out of a crisis in terms of investing in broadband for all to close the digital divide,” said Democratic Assemblyman Al Muratsuchi of Torrance, who is advocating for the bond proposal.

Beyond technology, the Legislative Analyst’s Office recommended that state lawmakers set minimum standards for distance learning in the event that campuses physically close again next school year. An executive order Newsom signed in mid-March protected schools’ attendance-based funding during distance learning, but did not include detailed guidance on instructional expectations.

That, as well as schools’ and students’ capacity to engage in online learning, resulted in uneven expectations across the state’s school districts on instructional requirements, such as how much, if any, live instructional time students were required to receive from their teachers.

“You have the opportunity to send some clear messages to school districts about what you expect them to do during these closures, and what kinds of distance learning should be put in place if additional closures were to occur,” deputy legislative analyst Edgar Cabral told a panel of lawmakers at a recent budget hearing.

“Going into the fall, who knows how much longer beyond that, we need to make sure that we have some accountability standards to make sure that our school districts are providing quality distance learning as this continues to be, to one degree or another, part of the new normal for the foreseeable future,” Muratsuchi said.