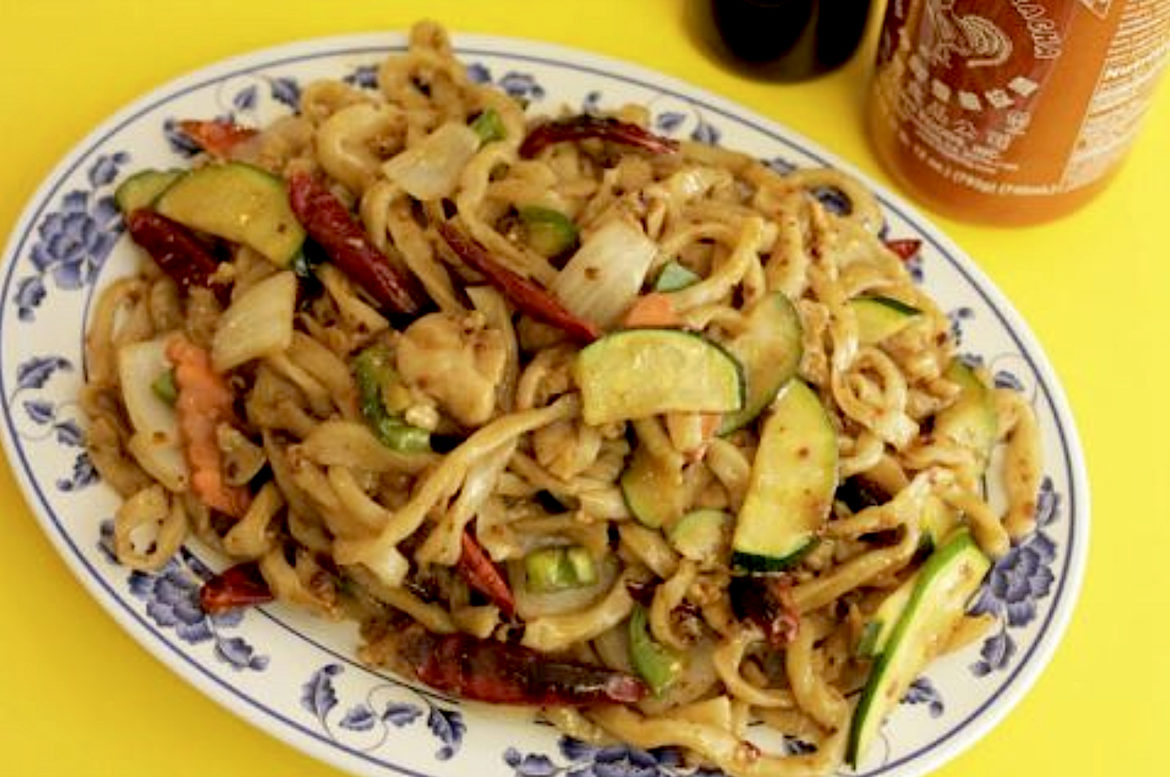 With customers locked out of restaurants for nearly three months during the coronavirus pandemic, Shan Dong Restaurant owner Charles Hung says people are “going noodles.” That is, takeout of thick, chewy hand-pulled noodles made in the kitchen at his Chinatown establishment in Oakland. The most-popular item on the takeout menu is featured in Hot Spicy Chow Mein, Sesame Paste Noodles and other savory dishes.

“People have an option of the choice of meat or just vegetables with it,” says Hung.  “Typically, at a Chinese restaurant, they just serve you standard stuff. Our food is unique because of the handmade noodles and because it’s spicy. Somehow, maybe because I like spicy myself, we just put it on the menu and it’s popular.”

Vegan customers, he adds, find a vast array of meat-less dishes and the spicy entrees are easily toned down for people who prefer a lighter touch. With prices ranging from $8-9 and dinner entrees $11-15—a five dish dinner special is $52.95—Hung says to-go business is steady.

Hung has managed the restaurant since the mid-90’s when he took over operations from his parents. They had immigrated from Taiwan a decade before, and opened Shan Dong in 1991 to offer cuisine in the style of his father’s home province, Shandong in Northern China. While his father passed away 5 years ago, Hung’s mother is still is there every day. Her duties these days are mostly answering the phone, but she still likes to check in on the cooking to make sure it’s all being done just so.

“Business-wise, we were doing a lot of to-go before the pandemic. People who had to wait in line sometimes switched to to-go and it’s normally more than half our business.”

“Now, people have no choice but eating to-go. We are not hurt so much because our orders are going up, rather than going down.”

Of course, adding deliver fees prior to and alongside curbside pickup has bit into profits. “We signed up with a third-part delivery service, which has made a big difference. While we are just as busy, our profit does go down. That’s just the way it is. We just make the best of it,” he concludes.

Making the best of Shan Dong’s small dining space that seats 50 at most is far trickier. Hung says he’s not planning to reopen the moment restrictions ease. “I’m not thinking about it and designing for each table six feet apart. Maybe I’ll have to rethink it, but we might not open even if they allow us to,” he says. “I’m not sure if our employees will be comfortable, first of all. Second, even with tables six feet apart, we could only have about six tables. We have to be fully staffed to serve and we can’t make it with six tables—or it would be a great challenge.”

“I’m thinking when I have to make a choice that I will probably choose to do all to-go with no in-house dining.”

Customers also have to feel comfortable eating in six-foot proximity, a third “pause-point” he makes before he says, “We’ll just go day-by-day for now.”

Which means keeping most of the staff employed. “We haven’t laid off anybody except a few staff who said they didn’t feel comfortable. When they stay home because of the virus, I don’t say no and I know they can earn unemployment for now.”

Anticipating some drop-off when other restaurants open for dining-in-house, Hung remains committed to the dedicated following his handmade noodles have earned.

“Because we bake the [noodles] here, you can taste the flour right in them. You can make them whatever you want: spicy, not spicy, beef, pork, seafood, chicken, vegetables. The choice is up to you.”