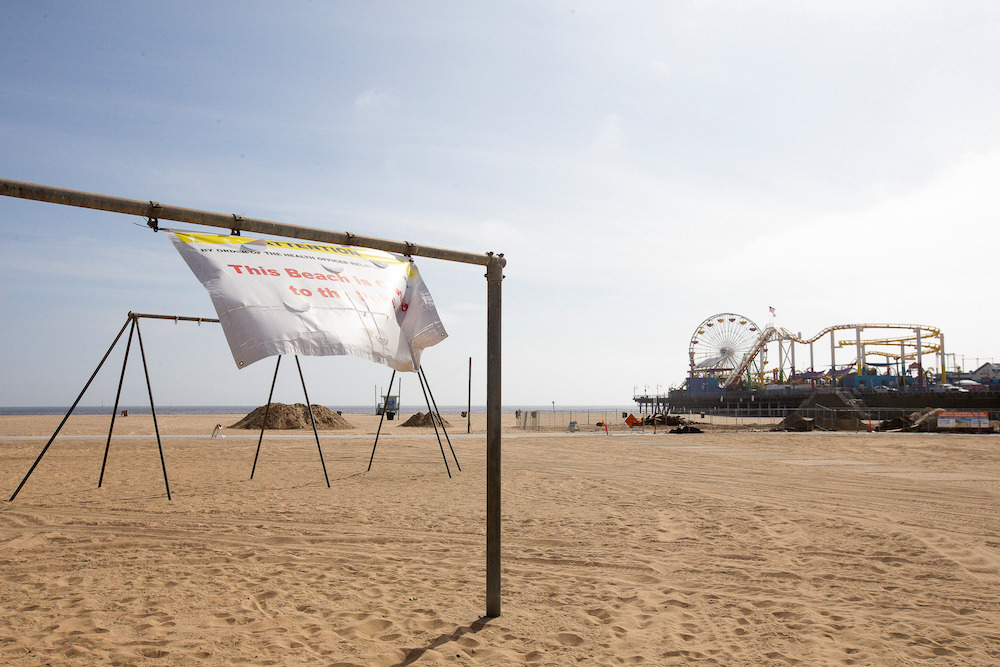 Santa Monica pier, beach and walkways are still closed due to COVID-19, May 8, 2020. Photo by Lisa Hornak for CalMatters.

By the time the coronavirus pandemic prompted Gov. Gavin Newsom to issue a statewide shelter-in-place order on March 19, California already looked markedly different. Tuna, pasta and toilet paper had disappeared from many grocery store shelves. Schools began to close and university campuses emptied out for early spring break. Public transportation cars were emptier than usual as many professionals began to work from home. The occasional pedestrian could be seen wearing a gas mask.

In many respects, life was in an unrecognizable state of chaos — resembling a Steven Soderbergh movie or an apocalyptic thriller more than the day-to-day life just a week or two before. Widespread anxiety spread, fueled by conflicting information and the unknown.

Once the order was announced, people retreated to their homes, businesses shuttered and public spaces emptied as everyone who was able sheltered from an invisible enemy. Overnight, California seemed to come to a halt.

The lights, colors and costumes at Disneyland vanished for the first time since 9-11. The media giant announced that its Anaheim park would remain closed through the end of March. The closure was extended in April. And, again, in May.

As Memorial Day weekend, the threshold to summer, passed, amusement parks and tourist stops across the state remained shut. Padlocks and gates barred visitors from their summer plans.

Traffic in Los Angeles and the Bay Area disappeared—at least at first. Suddenly it was possible to traverse the Bay Bridge in a matter of minutes. Signs above and along highways reminded drivers to wash their hands and limit travel to necessary errands. The highway patrol reported accidents dropped to a quarter of their usual frequency, while citations for speeding over 100 mph spiked.

The newly empty spaces felt eerie but also signified collective responsibility: a social contract to remain at home and keep each other safe. For many, the stillness ushered in a sense of calm.

How the virus continues to develop, and our response to it, remains an ominous mystery. As many counties begin reopening and Californians emerge into the awaiting world, these vacant spaces will fill once again — though perhaps not quite as full, and with an uncomfortable question lingering in the spaces between.

What if this happens again?

Will the emptiness we felt in the spring of 2020 become part of our collective memory, a moment frozen in time? Or will it follow us for years to come, reshaping our fates and our future?