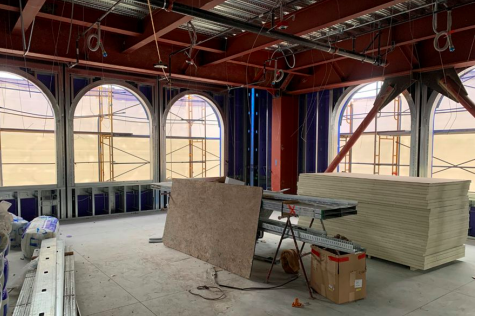 Rooms in the new STEAM building are moving into final stages of construction.

From construction to curriculum, coronavirus concerns colored many aspects of Wednesday’s School Board meeting. A packed agenda coupled with the awkwardness of conducting official meetings via Zoom led to a meeting length that extended well past 10 p.m.

Despite the technical challenges of managing a virtual public meeting, Board members, family, and friends were able to officially recognize Art Hecht Award winner Sue Smegal, receive an update on the STEAM building project, make a key decision regarding ongoing construction work at the high school, discuss the pros and cons of a new science curriculum, review a new policy of concurrent registration and more.

Facilities Director Pete Palmer presented the Board with a STEAM building status report. According to the memo shared with the Board, “The District’s facilities projects are continuing and all workers are strictly adhering to the County’s health and safety guidelines. Overaa, the District’s contractor, is working through supply chain disruptions and other challenges related to the pandemic, but the STEAM project remains on target for completion for the start of the new school year.” (Find the full report on the PUSD agenda here.) Pictures of the project show a building that is nearing completion.

But while the STEAM building project continues, concerns voiced by Board members in the last month about whether or not it was wise to proceed with the second part of the H1 project — building the theater — came to the fore at a critical juncture. According to Palmer, to remain on schedule, abatement of the 10s Building needed to begin this Monday in order to stay on schedule — demolition is planned for early June — and to minimize most disruptive work when school starts in mid-August, a move that the Facilities Steering Committee recommended  move forward “without delay.” The theater is expected to open in the Fall of 2021.

To various degrees, two board members — Sarah Pearson and Megan Pillsbury — sought assurances from the District that they would not regret tearing down the 10s Bldg in order to have more classroom space for public health reasons; i.e., smaller class sizes, 6 ft between desks, 15:1 or 12:1 ratios, limiting classroom-sharing among teachers and more. According to Michael Brady, the new STEAM building has a surplus of classrooms that can be used to accommodate a variety of social distancing requirements now and expand for future growth, making the 10s Building unnecessary. Supt. Booker gave some examples of what a “learning landscape” next year might look like, explaining that they tested out scenarios in the smallest classrooms on campus,  cleared out desks, tried to see how many desks can fit in each classroom with 6ft distance and could fit up to 16. That, combined with alternating days of instruction and new bell schedules would address the social distancing protocols that are sure to be necessary in the Fall.

“These are all examples. Nothing is set in stone. There is not a plan yet — bell schedules have to be negotiated with the teachers, these are examples for planning and conversation only. ” he cautioned.

Board member Smegal chastised the District for not having a robust contingency fund in place until the last few weeks and noted that over-reliance on the possibility of receiving state funds down the road was concerning.

Despite the concerns and a feeling among some that they were being rushed into a decision, the Board unanimously voted to move forward with the project. “In our community we normally have the luxury of time, but now we have to pivot. The Facilities Steering Committee report was persuasive. It is such a dynamic and fluid environment, we have a fiduciary responsibility to follow through.” said Board member Andrea Swenson.

The Board also received the Citizen’s Bond Oversight Committee annual report on H1, which said that in its review of summaries and reports of expenditures made between July 1, 2018 and June 30, 2019 it concluded that “the use of bond funds was appropriate; funds were expended only for the purposes of construction, reconstruction, rehabilitation or replacement of school facilities, program management and construction management, as limited by the text of Measure H1; and no bond funds were used for teacher or site administrator salaries or other school operating expenses.” The CBOC consists of community members from local businesses and organizations, legal, technical, and financial advisors, and parents of students enrolled in the Piedmont Unified School District. The CBOC members are: Grier Graff, Chair; Julie Caskey, Vice Chair; Adam Christensen; Kim Dao; Andrew Hempeck; Kyung-Hee Howard; Jonathan Levine; and Melissa Wilk.

Also on the agenda: First readings of new K-5 science instructional materials, administering medication and monitoring health conditions, concurrent enrollment, and alternative credits toward graduation. All of these items will be revisited at the May 27 School Board meeting.

In 2013, California adopted new science standards that align with the national science standards, referred to as Next Generation Science Standards (NGSS). In spring of 2019, PUSD convened a committee of elementary teachers to begin the science instructional materials adoption process. Pilot teachers unanimously recommended the adoption of Smithsonian Science for the Classroom.Some teachers expressed concerns about adopting a hands-on project-based curriculum when distance learning is likely part of next year’s experience.