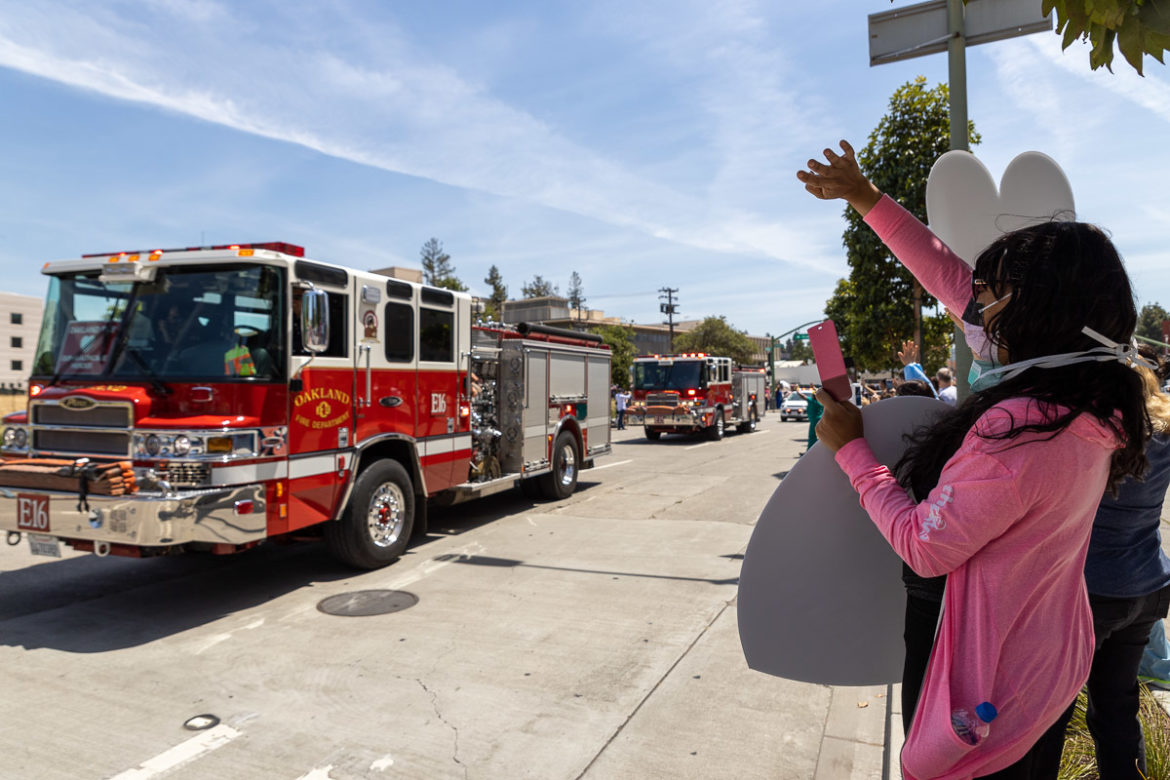 OAKLAND — LaShae Burton said she generally feels appreciated for her work, but didn’t mind having it driven home again … literally, this time, by firefighters, police officers, paramedics and others who did a loud, raucous drive-by salute Thursday afternoon.

“I have a lot of people telling me ‘Thank you,’ and that they appreciate what we’re doing here,” said Butler, a sterile-processing technician who works at Kaiser Permanente’s Oakland hospital complex off of Broadway. “It’s important for us to support each other, and to realize we’re all out there trying to make a difference.”

“What I really wanted to do was stop the car, get out and hug them,” Bowers said Thursday afternoon, after the 50 or so police cars, fire trucks and other emergency services vehicles (and two police officers on horseback) staged at Oakland’s Mormon Temple between 11 a.m. and noon, and then went on a four-campus tour that included Highland Hospital, Kaiser Permanente’s main Oakland campus, Alta Bates Summit Medical Center and Alta Bates’ Berkeley campus.

Piedmont fire Chief Bret Black, who drove in the procession behind Piedmont’s brand new fire engine (on its first official assignment), said the plan was to also drive past a fifth campus, Benioff Children’s Hospital Oakland. But hospital personnel had to mobilize to treat victims of a major traffic accident in Oakland, and couldn’t take part in the event.

“It sounds odd, but we’re good at shifting on the fly,” Black said. “These kinds of obstacles are thrown at first responders all day long.”

Michael Hunt, a spokesman for the City of Oakland, said the event – organized by the Oakland Fire Department and the Oakland Police Department – was a thank-you to the front-line fighters in the COVID-19 pandemic, the medical workers who work directly with coronavirus patients.

”When we heard that the police and fire people were coming to support us, it was a real morale boost,” said Tomas Gebre-Hehdin, a transporter who wheels patients – including COVID-19 coronavirus patients – from procedure to procedure. “We’ve been taking care of COVID patients for two months; some of them are very sick. We’re happy to have the appreciation.”

Workers at the Kaiser hospital in Oakland came out in force, perhaps 2,000 of them lined up in pockets along Broadway and MacArthur Boulevard almost an hour ahead of the procession’s arrival. There were signs, yelling, dancing, workers photographing groups of themselves, recording for posterity a positive event during a troubled time. Drivers of passing cars, AC Transit buses, dump trucks and bicyclists honked horns and rang bells in honor of the medical workers. They were loud, but nothing compared to when the official procession rounded onto Broadway from MacArthur. The crowds went crazy.

Bowers said everyone involved should have been enriched by Thursday’s drive-by call-and-response event. He equated its effects to “putting fuel in each others’ tanks.”

“It felt very unifying, and that’s what it was all about,” Bowers said.

Black noted that the hospitals Thursday’s caravan passed are the ones where Piedmont residents usually find themselves if they have medical procedures or need emergency care. That, he said, made Thursday’s event personal for him and his firefighters.

“This is going to continue on for months,” he said.