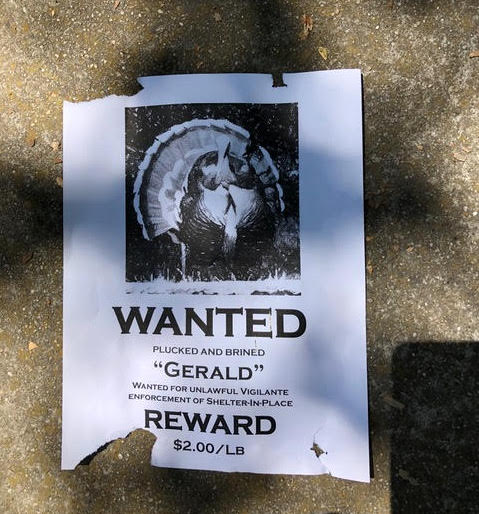 A flyer posted on Oakland Ave. near Grand.

Reports on NextDoor of an aggressive turkey attacking visitors to the Morcom Rose Garden, a popular local walking destination at 700 Jean Street, first surfaced last week, prompting the City of Oakland Animal Services division to temporarily close the park. The male turkey is apparently part of a family that has taken up residence in the park.

“Oakland’s Department of Parks, Recreation and Youth Development has temporarily closed the Morcom Rose Garden to provide some time and space to work to prevent human – wildlife conflicts. We understand there is a family of turkeys in the park and the male has become aggressive toward humans. We also understand that some humans have been feeding the birds regularly in the park.

Out of concern for the public safety and the turkeys’ well-being, Oakland Animal Services, working closely with the Parks Department, has contacted the California Department of Fish and Wildlife for guidance and support.

Following the State’s Keep Me Wild campaign, the City is asking people to please stay out of the park, to respect the prohibition against walking dogs in the park, and to never feed wildlife of any type.  In the meanwhile, Oakland Animal Services will work with the Department of Fish and Wildlife on opportunities to help retrain the turkeys and will work to educate our residents.

As has been seen across the globe, the retreat of humans as they shelter in place has led to an increase in the visibility of wildlife in urban areas. The City of Oakland respects the rights of wild animals to inhabit their natural homes and encourages all Oaklanders to support the right of our wild residents to remain wild.

Learn more about helping wild turkeys here and take a look at a useful handout here.”