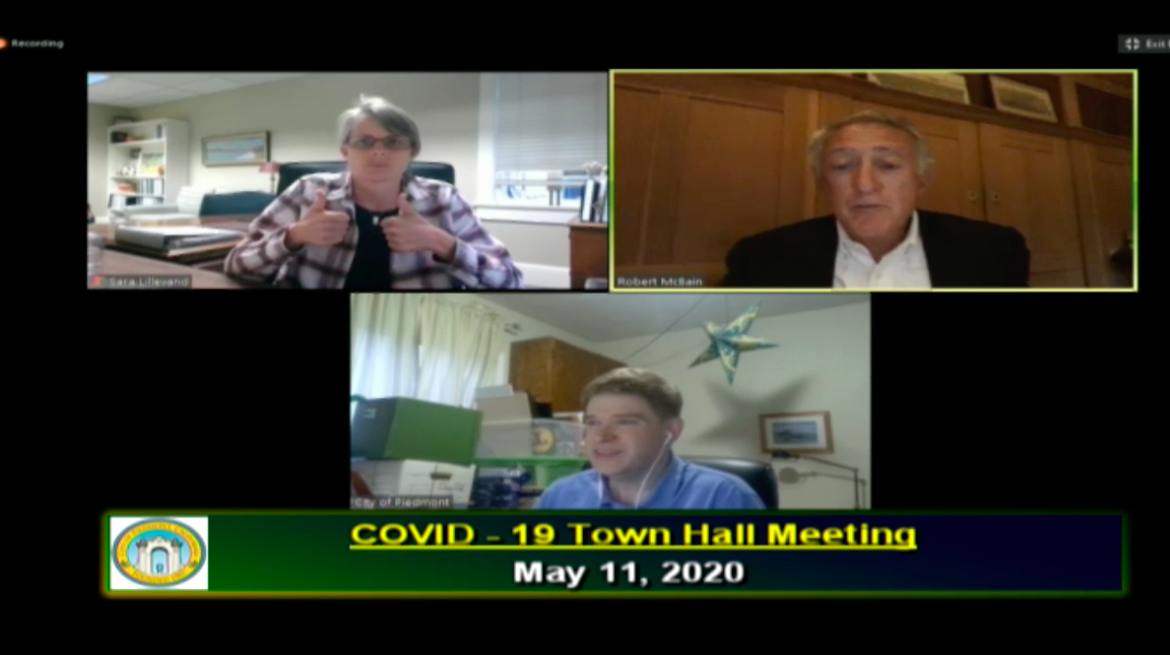 On Monday, May 11, Mayor Bob McBain and City Administrator Sara Lillevand took questions from residents regarding the state of Piedmont’s shelter in place protocols via a Zoom session moderated by City Clerk John Tulloch.

The questions ranged from will there be a July 4th parade (not this year, see City announcement released Tuesday) to garbage pickup services (Bulky/overage pickups will resume this Friday).

The bottom line? The city is doing the best it can to stay on top of changing conditions and announcements from county and state officials but they caution residents to expect some confusion as counties start to take different approaches to lifting or adjusting restrictions.

Among other questions covered:

Coronavirus cases in Piedmont: Lillevand said the city does not receive demographic data from Alameda County Public Health beyond the number of cases and has no plans to open a testing program for residents as was conducted in Bolinas and a part of the Mission in SF, both unique studies organized by UCSF. The city itself does not have the resources to meet county requirements for community testing. Piedmont’s first responders are able to get tested in Oakland and have done so.

City finances: McBain said he had a high degree of confidence that the city was in a strong position but they may have to change projections into 2021. Lillevand echoed that sentiment, saying Piedmont was in a good position to weather the storm in the short term, but there were lots of unknowns going into next fiscal year. McBain noted that Piedmont has a history of conservative budgeting that has served them well. (Note: There will be a city budget meeting on May 16. )

Tennis/pool: The city hopes to have the courts open later this week, but no indication from the County that community pools will open any time soon.

Dogs in Piedmont parks: The County has a rule that dog parks must be closed, but because Piedmont’s parks have off-leash zones embedded in them, the city settled on a compromise to open all the parks but keep dogs on leash for now. (Linda Dog Park remains closed.)

City employees: None have been formally laid off, but some part-timers in the Rec Dept. have been furloughed. Lillevand said she was hopeful that when programs and facilities reopen they will be able to come back. All Rec programs were cancelled March 16, but the city was able to redeploy staff for a couple of weeks to fill hours. Employees were also eligible for two weeks of paid sick leave.

All full-time employees are working, most remotely except for public works, fire, and police department frontline responders.

SIP and mask-wearing rules: Lillevand and McBain reiterated that SIP restrictions around gathering with non-family members remain in place. “We’ll just leave it at that.”

“No one should be leaving home without a mask,” said Lillevand. Masks are required in grocery stores or businesses, but it is allowable to walk or exercise without mask if with household members, but residents should carry a mask in case you can’t social distance.