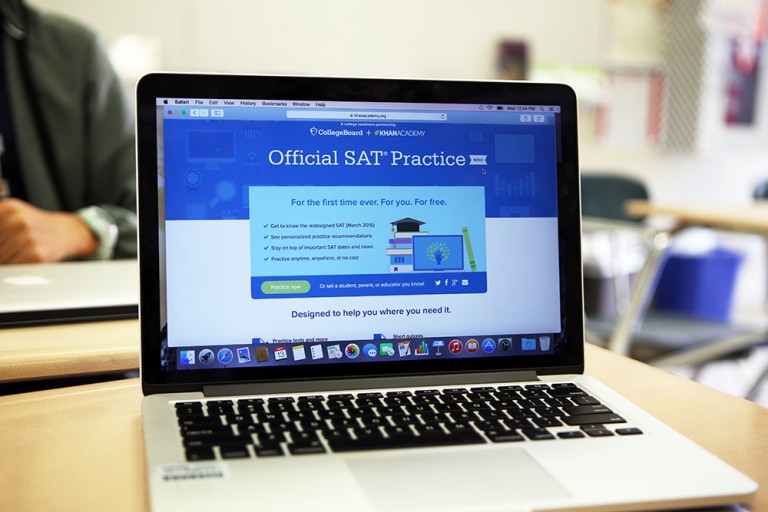 In a historic vote with national repercussions, the University of California on Thursday abandoned the SAT and ACT exams as a freshman admission requirement and decided to develop its own substitute standardized test by 2025.

A unanimous vote by the UC Board of Regents means that students for the next two years will have the option, but not be required, to submit standardized test scores as part of their applications at UC’s nine undergraduate campuses. Then for the following two years, those scores will not be used at all in admission but could be looked at only for course placement and scholarships.

Meanwhile, the university will try to create its own replacement test or adapt an existing exam to better align with what studetns are supposed to learn in high school, such as the Smarter Balanced Assessment test now given to all K-12 students. And if that does not work out by 2025, UC will drop standardized tests altogether.

With UC’s immense size and prestige, the move represents a blow to the standardized test industry and could encourage other colleges and universities to pull away from standardized tests, particularly at other public universities. The move represents a victory for critics who contend the standardized tests are biased against low-income and some minority students and allows affluent families to buy advantages through expensive test prep tutoring.  And, as the recent Varisity Blues scandal showed, some parents engaged in bribery and test cheating to get their children into prestigious schools.

“I think it is an incredible step in the right direction towards aligning our admissions with broad based values the university has identified,” said regents chairman John A. Perez, the former state Assembly speaker who is a strong proponent of increasing ethnic diversity at UC. He said the move also would help low-income students of all racial groups to gain admission along with those from rural areas around the state with low university attendance rates.

After five hours of debate and presentations, the regents approved UC president Janet Napolitano’s plan to move away from the SAT and ACT and to develop an alternative. The decision came despite a contrary report from UC faculty leaders who wanted the SAT/ACT maintained for at least several more years. That faculty study said the tests are good predictors of college success for low income, black and Latino students and that most inequities in admission arise from not taking the right high school courses.

But in countering the faculty, Napolitano insisted it was time for more dramatic action at the 285,000-student UC system and that she expected a substitute test to emerge in cooperation with the California State University.  “The right test is better than no test but a flawed test should not be continued to be required,” said Napolitano, who is leaving the presidency this summer. Students in the past had the choice of submitting scores from either the SAT or the rival ACT.

The decision came after regents made strong emotional and conflicting statements about the impacts and value of testing and whether it was wise to make the change during all the other chaos resulting from the pandemic. Ultimately, however, even the regents who had expressed doubt about Napolitano’s plan voted for it as a show of unity on an important issue. The move culminated six months of discussions and competing research, and in effect, rejected the faculty report that sought to bring back the standardized tests as a requirement at least until a new test is created.

Because of the problems in education and testing posed by the pandemic, UC previously had decided to make the test scores optional for current high school juniors who would apply to be admitted in fall 2021. Some regents said they feared that making the tests optional beyond next year would backfire, giving affluent students more advantages in being able to take prep classes and submitting the scores while low income students would be more likely not to even try to take the tests.  And some said they are worried that without test scores the more weight given to high school grades would lead to grade inflation, particularly in high schools in affluent areas.

Opponents of standardized tests were jubilant, even if another test may be on the way.

“Today’s vote by the University of California Regents to phase out ACT/SAT admissions testing requirements at all U.C. campuses is a huge victory for both equity and academic quality,” Bob Schaeffer, interim executive director of FairTest, the National Center for Fair & Open Testing a group that opposes standardized testing. said in a statement. He said the impact “will be both profound and far-reaching” and probably will influence other colleges and universities.

The College Board, which sponsors the SAT and stands to suffer a large loss of test fee revenues as a result of the UC action, issued a statement Thursday. “Regardless of what happens with such policies, our mission remains the same: to give all students, and especially low-income and first generation students, opportunities to show their strength. We must also address the disparities in coursework and classrooms that the evidence shows most drive inequity in California.”

The organization noted that students would still need to take standardized tests in applying to other colleges and that, as a result of varying admissions rules, some students may decide to instead “limit their college options much earlier in the college search process.”

The ACT organizations chief executive officer Marten Roorda issued a statement before the vote, criticizing Napolitano’s proposal and saying it would “further the uncertainty and anxiety of students and their families at a time when they need all the reassurances and resources we can provide.” The plan, he added, would create “more questions and concerns about fairness, equity, comparability and reliability” in college admissions.

In December, civil rights organizations and the Compton School District filed lawsuits demanding that the UC stop requiring the SAT or ACT exams for freshman admission. The lawsuits, filed in Superior Court in Alameda County, contend that the test mandate “systematically and unlawfully denies talented and qualified students with less accumulated advantage a fair opportunity to pursue higher education at the UC.”