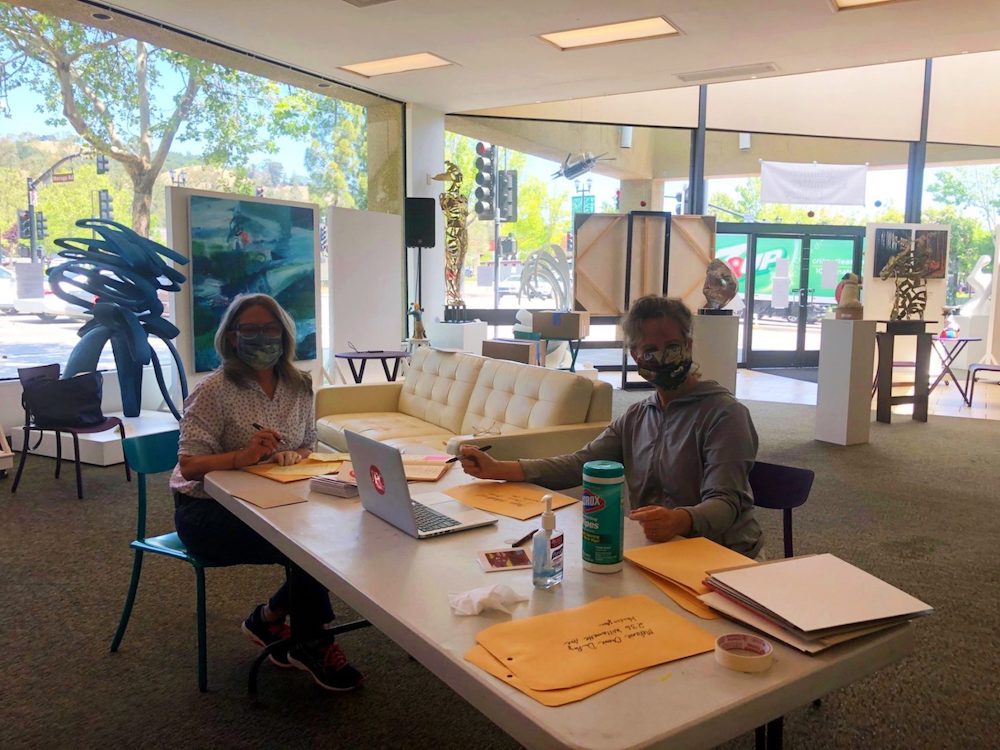 For Jennifer Perlmutter, 2020 promised to be the year when everything came together.

Six years ago, the longtime artist left behind her studio in Berkeley to open her own gallery in Lafayette. And just two months ago, the Jennifer Perlmutter Gallery was preparing for its busiest season ever, with a slew of showcases and programming on the docket for spring and summer.

“Things were moving in a really great way. We had a lot of things planned,” said Perlmutter. “We were kind of making it, and that’s really rare for a small gallery.”

But all visions of success were shattered when the coronavirus swept into the Bay Area in early March, forcing residents to shelter at home and nonessential businesses, including Perlmutter’s gallery, to close their doors.

Faced with canceled events and a massive loss in revenue, Perlmutter was overwhelmed by the change in her fortunes.

“Those first two weeks (after stay-at-home orders were announced), I felt knocked down to my knees,” she said. “Letting down the artists was the hardest thing.”

It was a conversation with her friend and fellow artist, Katie Korotzer, that pulled Perlmutter out of her self-confessed “pity party.” After attending a webinar hosted by Perlmutter and artist Jen Tough discussing the impact of the pandemic on the creative industry, Korotzer approached Perlmutter with the idea of creating a fundraiser that could bring artists and the community together.

“Artists were looking for a way to connect,” said Korotzer, of Orinda, who had experience organizing fundraisers for her children’s schools. “We thought we could get something started and get them involved.”

The fundraiser “came together easily,” said Korotzer. Perlmutter tapped into her network of artists to donate five-by-seven inch original artwork that could be shipped to people who gave $100 or more, and also secured a matching fund of $2,500 from an anonymous donor. Korotzer researched charitable organizations to support, eventually landing on the California Association of Food Banks (CAFB), a membership organization of more than 40 food banks across the state.

On April 19, Perlmutter opened the fundraiser on Facebook with a target of raising $2,500 within a month. In less than 24 hours, the pair of friends had met their goal.

“It was awesome,” said Perlmutter. “It was a reminder that people are listening, people want to help, people are behind you. We can all make a difference.” As of May 4, Perlmutter and Korotzer had raised more than $9,000 — more than three times their initial goal.

The CAFB wasn’t the only beneficiary of the charitable giving.

“It gave the artists a purpose,” said Perlmutter, who plans to mail the donated artwork. “It motivated us to get into the studio. It got us all out of our pity. That’s what thinking of others does.”

“It’s a great way for us to connect with the public,” added Korotzer. “It’s a message that there is hope, and through working together, we can find the strength we need to go forward.”

And it’s a message that Perlmutter believes will resonate long after the pandemic has passed.

“Art in all of its forms has the capacity to reflect ourselves and our humanity,” she said. “Here is this handmade piece of art that someone made. That’s just powerful. It’s love, and (our donors) get to receive that. It’s a real connection.”