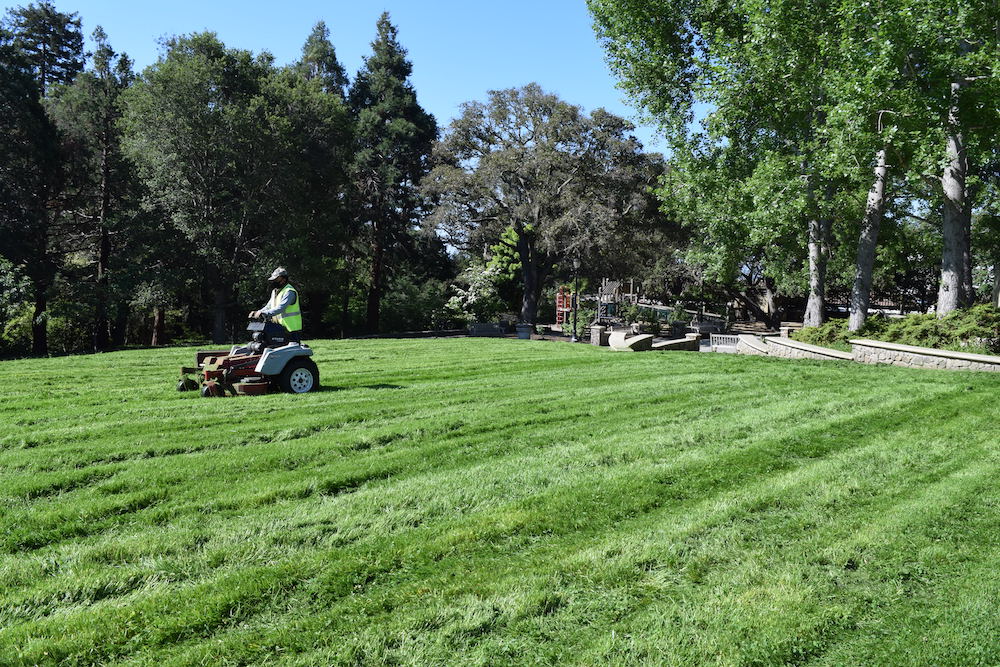 PIEDMONT — Cooper has been busting to go to the park for a while now, and on Tuesday he will finally have his chance.

“The dog just keeps wanting to go over here,” said Karen Sullivan of Piedmont, Cooper’s human, as she and Cooper walked past Piedmont Park Monday morning on the sidewalk next to Highland Avenue – and beside the yellow caution tape keeping people off of the lush green grass. And away from the trees, trails and creek.

But perhaps 30 feet away, groundskeepers were busy mowing the grass that hasn’t seen a blade for six weeks or so. And on Tuesday, the caution tape and barricades comes down here, and at other Piedmont parks.

“Even if it’s on-leash, as long as we can cut through the parks, I’m OK with that,” Sullivan said.

Beginning Tuesday, the City of Piedmont will open most of its parks for “socially distanced” use. This includes sports fields, green spaces and walking paths. City crews were working Monday to prepare the parks and fields for reopening, making up for deferred maintenance during the time when such work wasn’t allowed.

The park and sports field openings will be staggered, to allow city crews to finish the work needed for them to reopen.

“Now that we are allowed to landscape again, lots of park clean up and mowing is happening today to prepare for safe opening,” City Administrator Sara Lillevand said Monday in an email..

In deference to social distancing requirements, no gatherings will be allowed at any Piedmont park or sports field for the time being.

Specifically not reopening Tuesday, or in the immediate future, are playgrounds, tot lots, picnic areas, barbecue areas and Linda Dog Park. Also, dogs will have to remain on-leash in three Piedmont parks (all of Blair Park and parts of Dracena Park and Piedmont Park) that usually allow dogs to be off-leash. Park restrooms and water fountains will remain closed until further notice.

The April 1 closure of all of the city’s parks and sports fields was prompted by what city government leaders said were frequently observed violations of the six-foot social distancing mandates, and too many people gathering together.  A city email bulletin Friday night makes clear that police and others will remain vigilant concerning violations.

“Should residents not comply with these basic health protections, which are mandatory under the order, the city will have no choice but to close these spaces again,” according to Friday’s email bulletin.

On Wednesday,  the counties of Alameda, Contra Costa, Marin, San Francisco, San Mateo and Santa Clara, along with the city of Berkeley, released a joint statement saying that the shelter-in-place order first enacted on March 16 will now be extended through the end of May.  That same statement said the overall shelter-in-place order has indeed helped slow the spread of the coronavirus, in turn “flattening the curve” and preventing local hospitals from being overwhelmed.

On any issue where the local and state orders may differ, the stricter order applies. And in Piedmont’s case, that is usually the local order.

Several people out walking Monday morning around Piedmont Park said they were thrilled the parks are reopening.

“It’s important for everyone’s physical and mental well-being to get out and be outside,” said Sally Guzdar of Piedmont. “This is making me feel hopeful and positive to see this happening.”

Opening the parks should actually help with the social distancing situation, Sullivan said, because the streets and sidewalks have been crowded with walkers.

“Everybody has had to walk on the sidewalks instead of the park, and the streets have been pretty busy,” she said. “There’s a lot of space out here (at Piedmont Park) that allows you to spread out more.”

Marie-Claude Provencher and her daughter Mathilde said they walk from their home just outside of Piedmont up the hill from the east to Piedmont Park every other day or so. They will appreciate once again having the greenery and peacefulness of the park as a reward.

“We usually take the path through the park to the (Wildwood) school, but we’ve been taking the sidewalk instead,”  Mathilde Provencher said. “Now we can take our regular path again, away from the cars. With the creek there, it’s such a nice way to go.”