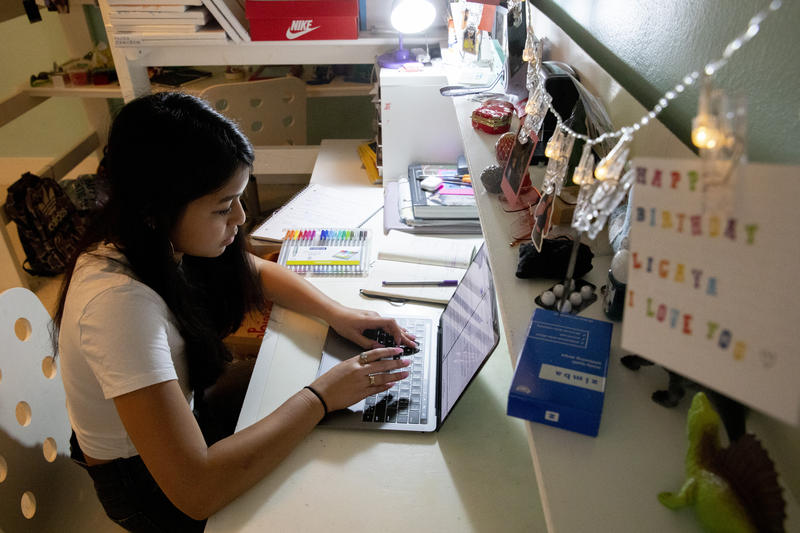 Ligaya Chinn studies for her AP Biology test in her bedroom at her home in Oakland. For the first time, high school AP tests will be administered online only in a take-home setting due to the Coronavirus pandemic and shelter-in-place order.

When the California Department of Public Health issued its first guidance to schools on Feb. 7 on how to handle a virus that had been “recently identified” in China, few could have anticipated the extended turmoil that would soon be inflicted on the nation’s largest education system.

In fact, the department downplayed the risks to California schools, and focused narrowly on students and staff who had travelled from China in the previous 14 days and showed signs of respiratory illness.

The alert said that health risk of the coronavirus “remains low” but urged “common sense precautions” including hand washing and separating sick children and staff from others in the school until they could go home.

Now, 100 days later, California’s education system has been completely upended in unimaginable ways. Nearly 10 million public school and college students are at home, taking distance learning of one form or another, while millions more young children are not in daycare or preschool as they normally would be. In homes across the states, bedrooms and kitchen tables have been turned into temporary classrooms, while education leaders have argued that public schools aren’t actually closed — just offering instruction in a different format and location.

“If you asked us this just a couple of months ago, it would have been totally impossible to predict that we would be reconceptualizing and trying to do things such a different way,” said Ben Chida, Gov. Gavin Newsom’s chief education advisor in a Facebook discussion with Wesley Smith who heads the Association for California School Administrators.

One strategy for returning to school safely for both K-12 and higher education is the “Return To Learn” program recently launched by UC San Diego, which involves trying to test everyone on campus for the virus with a nasal swab, isolating students who test positive and doing contact tracing to identify everyone they may have been in contact with. But even it is successful, it seems unlikely that most other educational institutions could replicate what is happening at UCSD — a campus with its own medical school and science labs.

More likely, distance learning will be part of the mix in both K-12 and college education to a far greater degree than ever imagined. For now, concerns about children being on screens for hours on end, especially at very young ages, have mostly been pushed aside.

Virtually every education institution has been closed for in-person instruction, for far longer than most parents and students originally anticipated. Along the way, there been tensions between state level pronouncements and local control, raising the question of who should decide when schools should close — and when they should reopen during a health crisis like the current one.

In return for getting state funds normally based on attendance, Newsom issued an executive order instructing schools to pivot to offering high-quality “distance learning.” In many if not most cases, that has been an aspiration rather than a reality. By contrast, colleges and universities made the shift much more easily, and students have continued studying remotely, complete with assignments, course requirements and grades. But there have also been great variations in the quality of college students’ online experience — at least in part contributing to so-far-unmet demands for tuition refunds.

At the same time, many public health experts believe that rapidly closing schools and campuses has played a role in California’s success so far in controlling the growth in coronavirus cases, hospitalizations and deaths.

In fact, over the last two weeks the number of hospitalizations and patients in intensive care has declined, allowing the state to begin to ease restrictions — and raising hopes that opening schools this fall at their regularly scheduled time will be possible.

The unexpected has also occurred, most notably placing a spotlight on the “digital divide” and forcing school districts along with the state to distribute tens of thousands of computers, tablets and hotspot devices. In what could have otherwise taken years to accomplish, students all across the state are being connected to the internet, a vital link to successful distance learning. There has also been new attention to “learning loss” and to offering meaningful summer courses that will engage all students, not only those struggling to make up lost credits.

Some educators say they see creativity in instruction emerging from the impromptu distance learning going on at varying levels across the state. Teachers have been encouraged to offer assignments that excite students and motivates them to learn for learning’s sake, rather than to earn a good grade.

At the postsecondary level, the pandemic has also prompted new ways of functioning, including being able to cut down on travel expenses by holding meetings and conferences remotely. “This COVID-19 crisis has forced us to innovate on a scale we did not think was imaginable,” said community colleges Chancellor Eloy Oakley at its board of governors meeting this week.

To reassure school districts worried about the financial impact of the closures — as well as teachers expecting a paycheck — Newsom issued an executive order saying schools would continue to get state funding. In return, they have to provide high quality distance learning to their students, distribute meals to students who usually got them through the school lunch program and offer child care of some kind to parents who have no other alternatives.

But the executive order was written with terms like “to the extent practicable” and “to the extent feasible,” giving school districts broad leeway — and some would say giant loopholes — in how they implement the order.

For the most part, schools have been able to meet the meal distribution challenge. Meals are being handed out in 5,000 locations around the state in the form of “grab and go meals.” In some cases, parents can drive up to pick up meals and meals are distributed in collaboration with food banks that offer additional food supplies. L.A. Unified says it has already distributed 20 million meals.

L.A. Unified Superintendent Austin Beutner compared the effort to getting a man on the moon. Yet,by May, Beutner was able to report that nearly all of the nearly half a million students in his district are now digitally connected, including elementary students who have lagged for months. “The rocket’s been built and lift off has occurred,” he said.

The cost of just connecting students to the internet has been enormous. In just one such expenditure, the California Public Utilities Commission came up with $30 million to help districts arrange for internet service and hotspots. Some of the wealthiest citizens in the state, as well as companies like T-Mobile, have also chipped in. Los Angeles Unified alone tapped $100 million in emergency funds for laptops and internet access, along with the training of students and teachers in how to use them.

Although considerable progress has been made, a digital divide along socioeconomic lines has been revealed — and not fully closed. The divide has been most acute in rural and many low income areas of the state. To address the issue, for example, Kern County Office of Education, centered in Bakersfield, sends out 150 school buses equipped with hot spots each day to various locations in the vast Central Valley — not to pick up students, but to provide them with internet access for a half hour during which time they can download their weekly assignments.

There is no way to know how distance learning is going across the state, because no study has been published assessing its quality or effectiveness — in part because everything is changing so fast, which does not lend itself to careful research. Clearly though there are wide variations in what students are being offered, not only among districts or from school to school, but also within schools themselves.

“Some good work has been done,” Newsom said in discussing the shortcomings of distance learning. But he also worried about learning loss, which will be most severe for students who were already behind. “I’m not naive,” he said. “Our kids have lost a lot with this disruption.”

Now a fundamental concern is when K-12 schools and colleges do reopen for classroom instruction, can students and staff be protected? Those concerns have been heightened because it now appears that children are not as immune from contracting or spreading the virus as had been thought until recently.

The entire issue has become politicized on a national level, with President Donald Trump insisting schools should be opened, without any hint that he understands what it would take to do so.

Newsom surprised local educators by declaring, without any advance notice to them, that when schools reopen it would likely be under radically changed conditions — including morning and afternoon sessions, staggered recesses and barring students congregating for recesses or other group activities.

While educators were still pondering how they could make that work, he added to the confusion by suggesting that schools might actually open earlier — in late July or early August — to help students make up for the learning loss and, not incidentally, to allow parents with child care needs that kept them home to go back to work.

Since then, Newsom and State Board of Education President Linda Darling-Hammond have tried to reassure parents and others that students would not be asked to return to school until it was safe to do so.

One option being considered is to have students attend schools on alternating days, as a way to reduce classroom size and allow for social distancing. But that would mean some parents would likely have to stay home to look after their children, defeating the goal of getting them back to work.

Colleges are also grappling with the in-person vs. distance learning dilemma.

So far a little over 20 of the 115 community colleges have announced they will be closed for in-person instruction this fall for most courses. But last week’s big news was the California State University’s decision to offer nearly all classes online in the fall at its 23 campuses.

Asked how long students campuses would be closed for most on-campus instruction, CSU Chancellor Timothy White hinted at a possible even lengthier timeline. “This isn’t an issue of being open or closed,” he said. “It is how do we safely repopulate the universities in a way that meets all health and safety standards, particularly in the light of the fact that we’re anticipating another significant outbreak in the late fall, and also again, quite frankly, in the spring of 2021.”

Along with their K-12 peers, many colleges nationwide are also talking about offering various forms of a hybrid education — with large lecture classes being offered remotely, along with some in-person instruction for smaller classes, sections and laboratories. Other options — among many — are to allow only graduate students who don’t live in dorms back to school, while still keeping undergraduates at home for the fall semester.

It is uncertainties like these that make planning for the fall exceptionally difficult — and put not only educators but state officials, beginning with Newsom, in a difficult bind. There is widespread acceptance that distance learning is not an adequate replacement for in-person instruction, and that the goal should be to get students back to school as soon as possible. Yet no one wants to expose students or staff to possibly unhealthy conditions.

How the state resolves that central tension will shape the contours of education in the months, and possibly years, ahead.