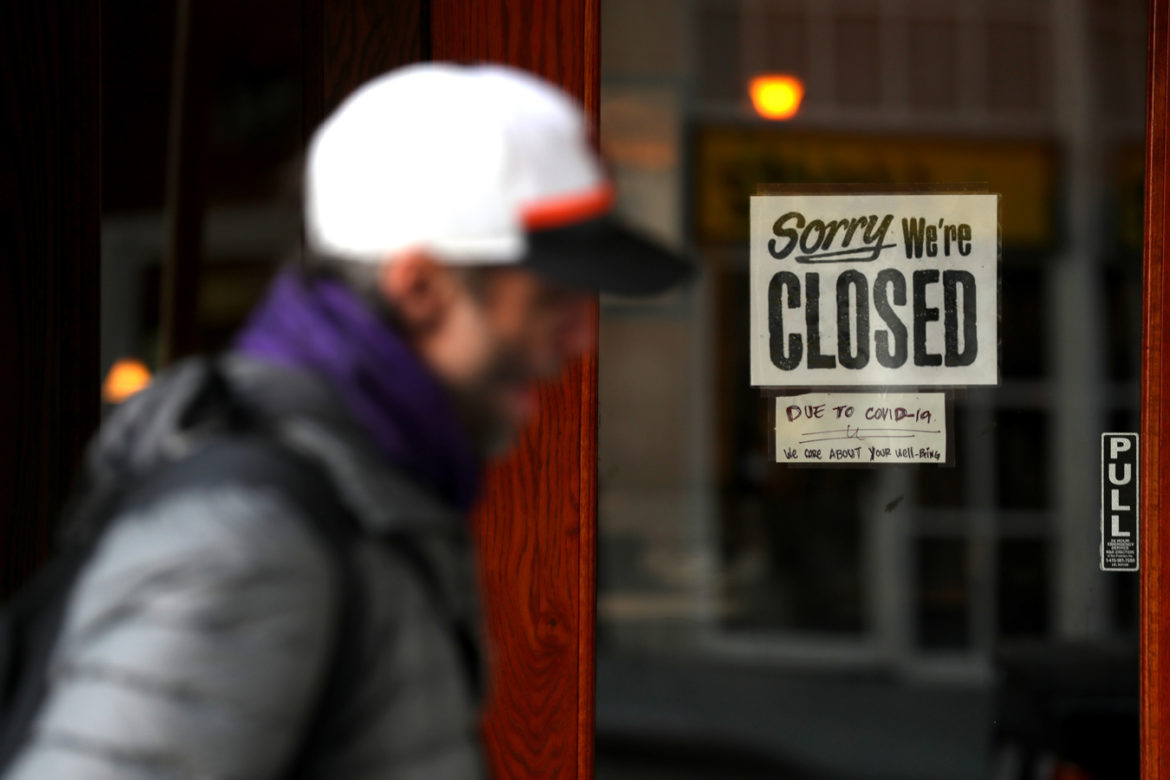 A pedestrian walks by a closed sign on the door of a restaurant on March 17, 2020 in San Francisco. (Photo by Justin Sullivan/Getty Images)

Emilio Romero, 23, has mixed feelings about losing his job. It’s a major financial setback, but with two previous hospitalizations for pneumonia, a restaurant was not the safest place for the recent college graduate as the COVID-19 pandemic mushroomed.

“Working in a restaurant, there’s obviously exposure to a lot of people and dirty plates,” Romero said. “Even before I was officially laid off, I was getting pretty nervous about the way everything was playing out, for my own safety.”

Romero worked his last shift as a restaurant host in San Diego’s Little Italy on March 16, the same day San Diego County officials ordered all restaurants to switch to takeout and delivery only. Since then, COVID-19 cases in California have increased by more than 22 times, from 598 to 13,438 as of April 4. If his restaurant asked him back tomorrow, Romero said, he wouldn’t risk it.

Yet he worries about his bank balance, which is barely sufficient to cover one month’s rent and expenses.

He’s considering asking his landlord whether he can break his lease to move back in with his parents. But he hopes a government check from the recently passed $2 trillion stimulus package will allow him to stay put as he continues to study for his real estate license — though it’s another industry jeopardized by the virus-driven economic downturn.

As measures to slow the pandemic decimate jobs and threaten to plunge the economy into a deep recession, young adults such as Romero are disproportionately affected. An Axios Harris survey conducted through March 30 showed that 31% of respondents ages 18 to 34 had either been laid off or put on temporary leave because of the outbreak, compared with 22% of those 35 to 49 and 15% of those 50 to 64.

John Gerzema, CEO of the Harris Poll, said it was important to note that the latest survey data does not factor in the doubling of U.S. jobless claims to over 6.6 million in the past week. That number “would suggest further pain and dislocation to 18-34 years olds,” he said.

But the economic fears of many young people, even ones with uncomplicated medical histories, are increasingly counterbalanced by health worries as they grow more aware of the risks of COVID-19. After hearing for months that it threatens primarily seniors and people with chronic diseases, they are now seeing how it imperils their own age group, with consequences such as lung failure.

“It’s natural that as we learn more, it’ll become clear that there are substantial costs for young people, even if the risks are, in fact, much greater for the elderly,” said Jeffrey Clemens, a health and labor economist at the University of California-San Diego. “Whether people want to work depends in part on other qualities of the job, one of which is whether it comes with serious health, physical or other risks.”

Despite the harsh economic impact, “epidemiologists and economists agree that the isolation is necessary, at least for a short period of time, both to avoid the big spike and to have the number of cases go down ideally to low-enough levels,” said Philip Oreopoulos, a labor economist at the University of Toronto and researcher for the Cambridge, Massachusetts-based National Bureau of Economic Research.

However, long-term unemployment and lower wages, associated with entering the workforce during a prolonged down economy, also carry health risks, including higher mortality, said Oreopoulos, who co-authored a paper on recessions and wages.

“That’s the part that gets me restless at night.”

Quinn Stephens, a student at Santa Barbara City College, lost his job as a restaurant server in March as the COVID-19 pandemic spread. Under California’s statewide stay-at-home order, Stephens is spending his time in his apartment, taking his classes online. He plans to study engineering at California Polytechnic State University-San Luis Obispo in the fall.

A recent study of the recession of the early 1980s shows that people who entered the labor market at the time later suffered increased mortality, starting in their late 30s, due to causes that included lung cancer, liver disease and drug abuse.

About 20 million people age 24 and younger will either seek work or hold jobs in this pandemic-stricken economy, said UCLA economist Till von Wachter, a co-author of the study.

Economists say it’s too soon to predict how a pandemic-induced recession will affect young people. Nobody knows how long businesses will remain closed, and data on workers is still coming in, said Sarah Anzia, faculty director of the Berkeley Institute for Young Americans at UC-Berkeley’s Goldman School of Public Policy.

But a record-smashing 10 million people applied for unemployment benefits in the U.S. over the past two weeks, and Anzia said service industries such as leisure and hospitality — the first to be hit by the shutdowns — have a large share of young service workers who could feel the impact for years.

For now, many young people are just hunkering down, waiting for the COVID-19 storm to pass.

Quinn Stephens, a 22-year-old student at Santa Barbara City College, lost his job as a server at a hotel restaurant earlier this month. Before that, he had continued going to work even after his managers said employees could turn down shifts if they were nervous about COVID-19. He was trying to save money for tuition, and the gravity of the pandemic had not yet sunk in.

But he’s changed his mind now. “I’d lean toward staying home at this point, because I’m seeing how my actions can affect so many others,” and young people are also being “affected pretty severely” by the virus, Stephens said.

“Going outside and continuing life as normal, right now at least, would be a big mistake that could lead to a lot of people dying.”