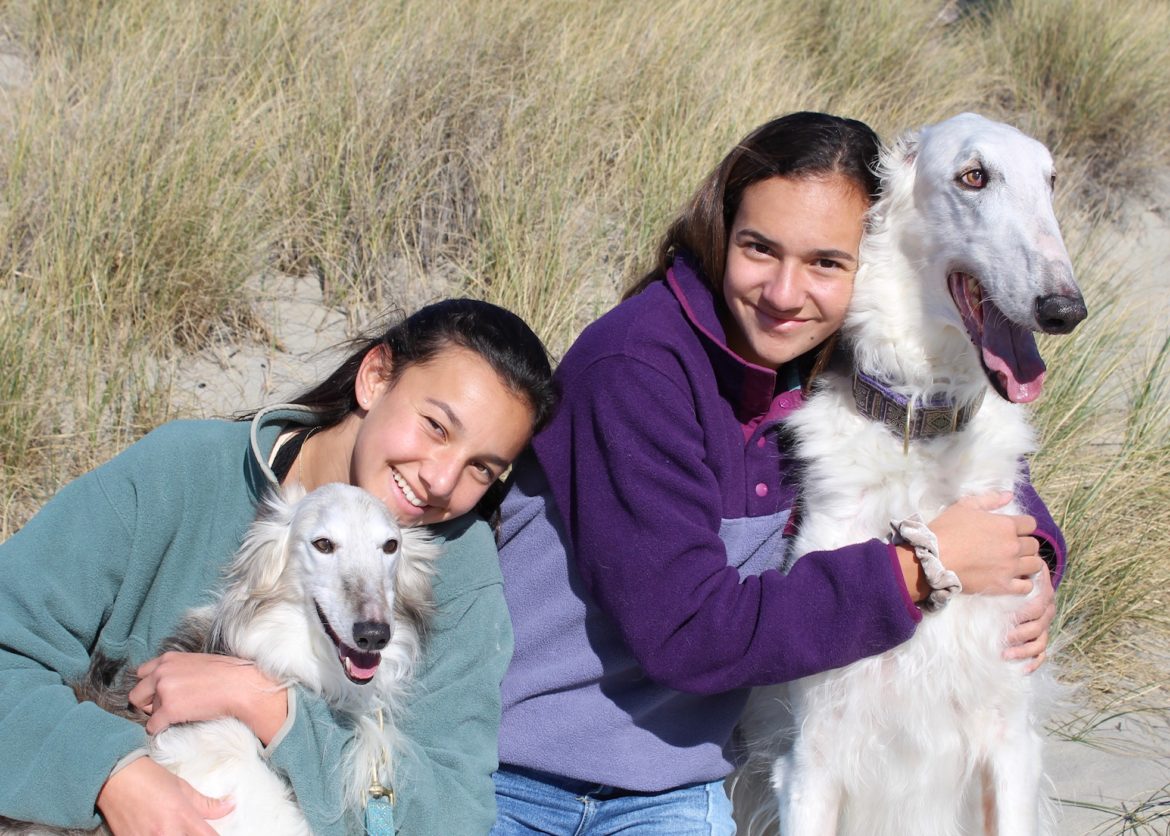 The Turner sisters with Zeus, left, and Zar

Breeds: Zar is a Borzoi; Zeus is a Silken Windhound

Adoption story as told by Annemarie: In a former life, when I worked in Russia I was gifted a Borzoi puppy, whom I named Dasha. She was such a great dog that when my kids asked for one we chose to rescue an older Borzoi and named her Zola. She did not like being left home alone so she would yodel. She needed a friend. We began searching online. We rescued another young adult Borzoi from a breeder in Washington, D.C. Adopting a Borzoi is almost as difficult as adopting a child; Borzoi breeders are protective and want to be sure you will be a good owner. We arranged to have him sent cross-country by truck since he was too large to fit in an airplane kennel. Zar and Zola were also too big for my daughters to walk, and they really wanted to walk them, so I began looking for a smaller dog. Not long before Zola passed away we also adopted a Silken Windhound, whom we named Zeus. We wanted a dog who could handle himself around two Borzoi.

Likes: Zar loves lounging on the couch. His own couch. And he likes to have a nice chilly room to sleep in. He also loves sharing his bowl of food with Zeus. Zeus loves being chased and is an excellent hunter.

Dislikes:  Walking away. If you pet Zar and he wants you to continue, he’ll tug on your sleeve if you try to walk away. Zeus dislikes rats.

Interesting Facts:  Borzoi were the breed kept by Czar Nicholas and the royal family in Russia. They are not tail waggers or pleasers. They rarely bark. But they are very strong, loyal and smart. Silken Windhounds are fast runners and very acrobatic. Zeus can do a 360 turn at full speed.

Anything else we should know: Zar is named after a fictional character in my novel Lara’s Gift. The book is set in Russia and a big part of it is about a Borzoi. The first time I saw Zar he reminded me of the character.