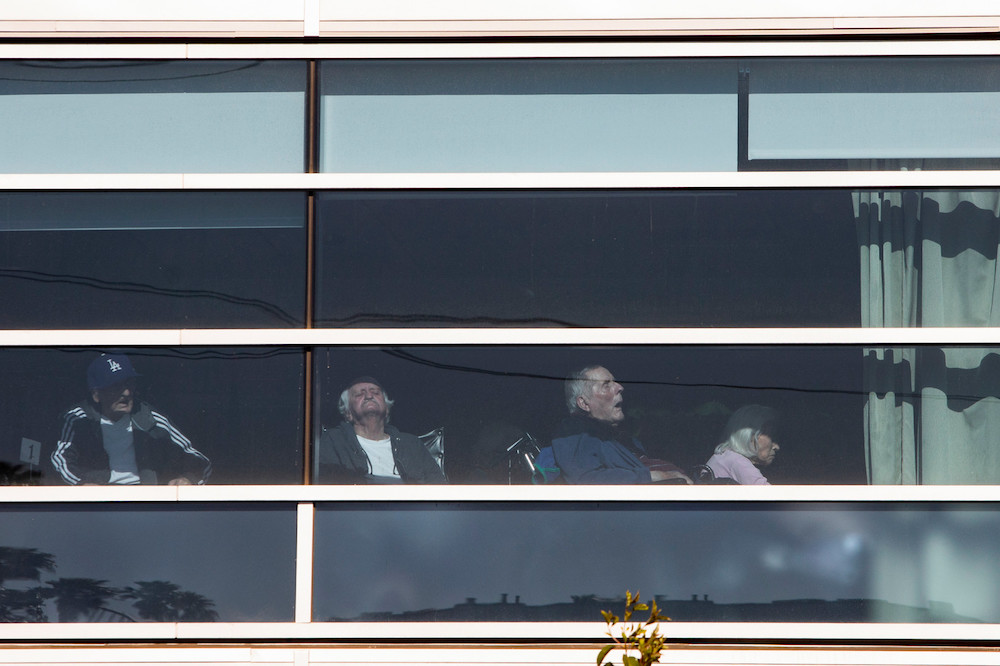 Seniors are seen through the window at Grancell Village of the Los Angeles Jewish Home for the Aging in Reseda on April 11. Photo by Nancy Pastor for CalMatters

For the first time since the coronavirus pandemic began, California released the number of COVID-19 cases in nursing homes, showing that roughly 10% of the state’s 31,527 confirmed cases are found among the staff and patients at care centers for the elderly.

The state list was released late Friday evening, a few days after reports in CalMatters and The Los Angeles Times pointed out that much of what is known about the virus’ spread through nursing homes was shared through personal connections, rather than an official public source.

Still, the data have some glaring holes, The Los Angeles Times reported. Some nursing homes are not testing residents to avoid bad publicity, The Times found. Also, the state data only include information from 86% of California’s 1,224 skilled nursing facilities; it doesn’t reveal how many residents have died from COVID-19; and the data from smaller facilities are incomplete.

The Mercury News also reported Sunday that two nursing homes with the highest number of COVID-19 infections and deaths in the Bay Area had lengthy track records of poor care and state and federal safety violations.

Legislators asking questions today: The state Assembly is holding a hearing on the government’s COVID-19 spending, following a Senate hearing on the same subject last week. I’ll be reporting from the Capitol, mask and all, and listening for questions about how the state’s modeling of the virus is affecting its spending. As the Assembly agenda points out, the state’s model predicts a peak in May, but another “widely cited” model contends we hit peak resource use April 17.

The Bottom Line: As of 8 p.m. Sunday night, California had 31,527 confirmed coronavirus cases and 1,157 deaths from the virus, according to a Los Angeles Times tracker. (These numbers are different from those of the state Department of Public Health, which are updated less often.)

Also: CalMatters is tracking, by county, positive and suspected cases of COVID-19 patients hospitalized throughout the state. We’re also tracking the state’s daily actions. And we have an explainer for everything you need to know about California’s response to coronavirus.