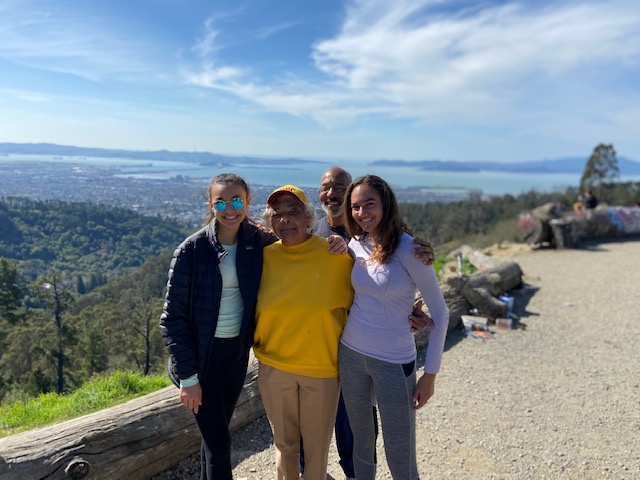 The author in back, with his mother June Marie Turner, center, and his daughters Anjuli, left, and Aubry, right

Planting my mother’s front yard last week was in many ways an act of faith.

The plants should have gone in over two weeks before that when my daughter Aubrey and I picked them out from the nursery at Home Depot; Blue African Agapanthus, Lavandula Lavender, Black Star Calla Lilies, Moon Bay Nandina, Mexican Sage Bush, New Zealand Flax, Blue Festuca grass and Rosemary.

But Mom made us wait till she could research them all, draw up a schematic anticipating growth, smaller plants up front, larger ones in the back. “That’s ‘Grandmom June’,” my daughter said.

The whole process started way back in December, before we knew anything about an atypical pneumonia in Wuhan. A bramble of Juniper bushes, unmanageable after years of growth, stood as an eyesore in in the front yard of her house in the Maxwell Park neighborhood of Oakland. No one liked it except for a family of spiders. Mom agreed it should come out, but insisted we wait until after the new year. Said she didn’t want everything all amess for the holidays, as if she were expecting the Queen.

So, the first week of February, after the rains, right about the time the World Health Organization officially named the illness in China COVID-19, that Juniper bush was pulled up, a huge improvement. By Valentine’s Day a short two-foot keystone wall had been built, dirt hauled in and the front yard leveled. I recommended a watering system but Mom refused.

“We’re in a drought,” she said. “Irrigation is irresponsible.”

The following Saturday we celebrated Mom’s 87th birthday with a tailgate picnic at a turnout off Grizzly Peak. The mist had concerned me earlier that morning as I drove in the hills scouting out locations, but the fog burned off by noon, leaving us with an unobstructed view out over the bay clear past the Golden Gate Bridge.

By that date, statistics from China suggested 80% of people infected with COVID-19 would experience only mild to moderate symptoms. But two percent would die. The number of cases throughout China continued to climb, rapidly, despite a complete lockdown of Wuhan.

At the San Mateo urgent care where I work as a doctor, things evolved daily as well. We wished to continue testing our patients for strep and influenza, diseases we could treat, but every time we swabbed a throat or a nose it created a risk to the staff of contracting COVID-19. If any one of us fell ill from that, the mandatory quarantine of all contacts would potentially remove a whole shift or even two from staffing. Who would be left to work, not to mention the real threat of carrying COVID-19 into our homes? Administration made an executive decision to stop testing at our site. Ultimately, we screened patients at the door directing respiratory cases to specially equipped facilities.

At my house, my older daughter Aubrey became ill with a cough and fever in early March. Around the same time a friend I hadn’t seen in over a year called to report flu-like symptoms after returning home from a ski vacation in Idaho. A week later, near the time my friend’s test came back positive for COVID-19, my younger daughter Anjuli became sick.

Schools were shut in the middle of March. Students started distance learning. When I got home from work on March 19, I picked up the girls and we drove to a favorite turnoff in the Berkeley Hills where we celebrated Aubrey’s 18th birthday. Hanging out in the car, we ate tacos from Cholita Linda, shared stories, played Catch Phrases and extended a family tradition, birthdays on Grizzly Peak.

“Most fun I’ve had all day,” Aubrey said.

That same day Governor Newsom issued his second, stricter, shelter in place, ordering all nonessential businesses to close. Piedmont got serious, sealing off city courts with chains and padlocks and cordoning off city parks with saw horses and crime scene tape.

Patient volumes continued to dwindle everyplace I worked. People stayed home maybe afraid to catch something worse than what they had. Maybe being at home prevented dumb stuff that would otherwise have landed them in urgent care. Perhaps just staying home truly flatted the curve.

The irony is that despite all the alarm, I’m actually working less than I normally would. In late March I got laid off in San Mateo due to low volumes. Fortunately, I continue to work in Concord and San Pablo.

One thing I’ve learned in dealing with COVID-19 is the importance of asking the right question. And the question that no one is asking is, “Why do COVID-19 testing?”

We don’t need testing for commonsense solutions; stay home if you’re sick, cover your cough and wash your hands. I’ve been telling people that for over 30 years.

We don’t need testing for treatment, there is none for COVID-19. Not even a vaccine.

We don’t need testing to tell us we’re sick. Monitor symptoms and seek further care for persistent fever or shortness of breath. No throat swab can answer that.

To gain understanding about the disease, statistical analysis. Tests should be used in well-designed, well-controlled studies to help us understand how the virus behaves in populations. And, for instance, when it’s OK for recovering people to return to work.

Experts suggest that only 10% of people with respiratory symptoms will test positive for COVID-19. And as sick as my daughters were, they both tested negative for COVID-19.  My friend who tested positive has completely recovered now, four weeks after onset of symptoms. Her repeat test, performed a week ago, is still positive, meaning continued viral shedding. She can’t yet return to work. Think about that when talk turns to everyone going back to the office.

My daughter and I brought our own tools to plant Mom’s yard. While there we exercised social distancing. All this effort to keep Mom safe. And the yard is transformed. I’m excited wondering what it will look like come winter. It could be really something, but that’ll require water. I still think the solution is drip irrigation. There’s a small chance however, that Mom will keep it watered, help the yard to look amazing. After all, she’s probably expecting someone special for Christmas. Two things now, to look forward to.

3 thoughts on “Voices | In an unsettled spring, something to look forward to”