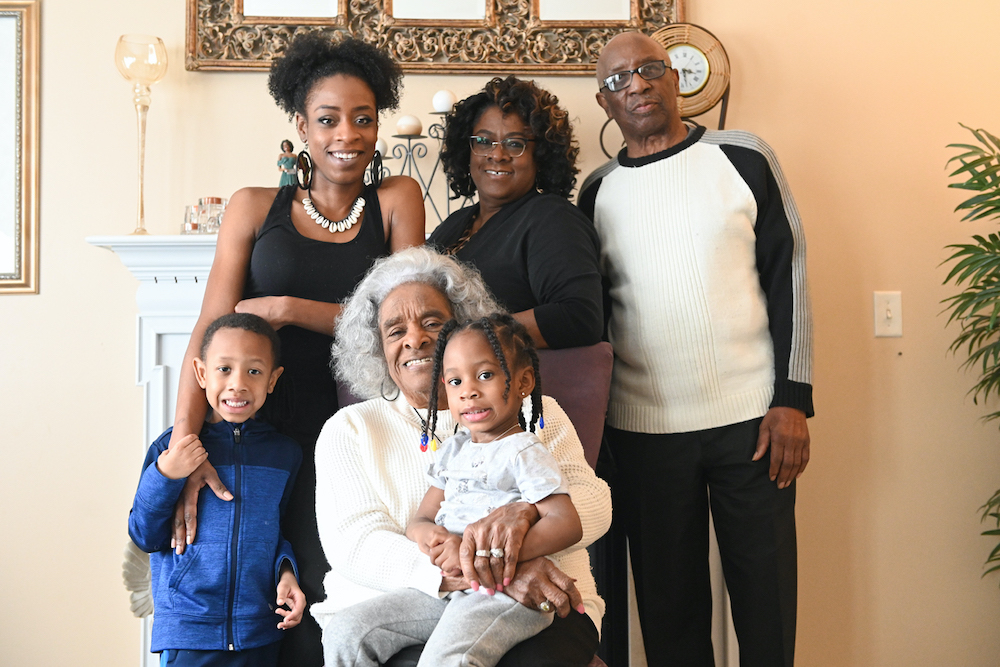 FLORISSANT, Missouri — The Walker family never thought having an age range of 3 to 96 under the same roof would be risky.

That was before the coronavirus pandemic.

Wilma Walker’s now nonagenarian mom moved into her daughter and son-in-law’s home about 15 years ago. Their party of three turned into a household of six when the Walkers’ now 30-year-old daughter, Andre’a Walker-Nimrod, moved back in with her young son and a daughter on the way.

Their living arrangement — four generations together under one roof — has its advantages: financial support, shared meals and built-in child care for Andre’a’s kids, now 5 and 3. But this “tier” generational setup also heightens their concerns as the coronavirus continues to march across the world, with young people positioned as potentially inadvertent carriers of the virus to vulnerable elders for whom COVID-19 could be a death sentence.

“With all of us in the same home, I feel like I’m the one that’s kind of guarding everybody,” said 63-year-old Wilma Walker.

While nursing homes are banning visitors and many people are preaching the message to stay away from older adults, not everyone has that option. More than 64 million Americans live in multigenerational households like the Walkers’ — often a combination of adult children, their parents and grandchildren. That’s 1 in 5 U.S. residents.

With the omnipresent coronavirus threat looming, those who live in such households around the country are voicing concerns and sharing their experiences online. Some families have decided to practice social distancing within the home, while others worry about being asymptomatic carriers.

“Until further notice, all of us are quarantined,” Tori Dixon said of her two-generation household in Fort Worth, Texas. “We’re trying to stay put and stay in place until we have a better idea of what’s going on.”

Dixon, 42, shares a home with her 69-year-old mother, her 48-year-old sister and 13-year-old brother. For now, they are social distancing from others to keep her mom safe, and her mom has not been out of the house in four weeks. Dixon’s mother was diagnosed with severe bronchitis in 2018, which left her with a compromised immune system.

In some cultures, within the United States and elsewhere, multigenerational households are the norm. In recent years, more American families have adopted the lifestyle, some building homes with “granny flats” as baby boomers move in with their kids and vice versa. To be sure, the idea of combining households has always helped families get through tough economic times and life transitions such as death, divorce or job loss.

Multigenerational households face a unique set of challenges during the novel coronavirus pandemic because they can’t easily separate children from older family members in the home, said Donna Butts, executive director of Generations United, a national nonprofit that advocates for children, older people and families.

In addition to her group’s online tips, which include cleaning kids’ toys and seeking home delivery of medications, she suggested leaving younger children at home, if possible, when someone has to go out for groceries. Kids are more likely to touch things in stores, risking the spread of germs. Excellent hygiene is strongly encouraged, she said.

In Belleville, Illinois, Maxine Edwards, 74, has been living with her daughter and granddaughter since her husband died. Now, ever since the pandemic shuttered preschools, she is taking care of her 4-year-old granddaughter, Kinsley, during the day while the girl’s mother, Kristi Edwards, continues to work as a patient care coordinator at Southwestern Hearing Centers in Fairview Heights, Illinois.

“She keeps me busy,” Maxine Edwards said. “It’s a lot busier than it was, but I’m glad to have them around.”

Every night, Maxine Edwards sleeps in a plush, brown recliner in the living room. The common space doubles as her bedroom because Edwards, who suffers from arthritis, said it’s too painful to sleep in her bed.

“I always say that I don’t have to make my bed in the morning,” Edwards said, with a chuckle. “My granddaughter gets a kick out of waking Grandma up.”

If they needed to separate, someone else would have to drag her recliner into a bedroom. Edwards isn’t able to physically move around as much as she would like. But she pushes past her pain to keep her granddaughter entertained.

“They love playing Play-Doh, painting and Barbies,” Kristi Edwards, 46, said. “’Frozen’ is a favorite, along with ‘Trolls.’”

To give her mom a break amid the pandemic, she recently found a friend willing to watch her daughter a few days a week.

But while the coronavirus presents new challenges for these families, communal living with multiple generations gives each person a foundation to withstand the crisis, said Butts, the advocate for elders.

“In our society, we tell people that they have to be independent, they have to be alone, and that’s the way to be. And yet, we are people, we need each other, we’re interdependent,” Butts said. “Multigenerational families are incredibly strong.”

The Walker family has a preparedness plan for illness, just as they do for a fire or natural disaster. As a family of ministers, Walker said, her family is praying for the pandemic to end. But they’re also practicing social distancing and washing their hands more. They canceled an 80th birthday party for Walker’s husband, Howard.

The matriarch of their family, Evelyn Whitfield, the oldest member of their family at 96, is spending more time inside. She loves to give warm hugs. But, for now, she’s avoiding direct contact with anyone who appears sick.

Long before “social distancing” became a buzzword, her family always put space between Whitfield and anyone who felt sick in their home. Taking it one step further, Walker said, members of their family go into isolation in the home if one of them falls ill.

Both ideas can be hard for younger children to grasp. That’s one reason Whitfield has her own space in their house. It’s a place where she can go if she needs to escape from germs.

“I love being around my family,” Whitfield said during breakfast on a recent Saturday morning. “I wouldn’t want to live alone.”

Walker loves having her mother there, too. She was still learning how to take care of herself when she decided that, later in life, as her parents aged, she would take care of them. Her father, Wiley Whitfield, died in 1992.

“I can remember being a girl, probably about 10, when I started to realize that I wanted to take care of my mother,” Walker said. “I always knew we were all going to live together. I always looked forward to it.”

Complicating matters in these coronavirus times, though, is her effort to keep the family’s business afloat. Six years ago, they opened WTMM Adult Day Health Care Center, a nonprofit adult day care for seniors who have Alzheimer’s, autism or dementia.

The center closed late last month, because the pandemic was reducing visits from the seniors and dried up the insurance payments needed to pay staff. But even when it does reopen, Whitfield, the 96-year-old who serves as a chaplain at the day care center, said she may spend less time there because she’s now more aware of the risks she faces around her.