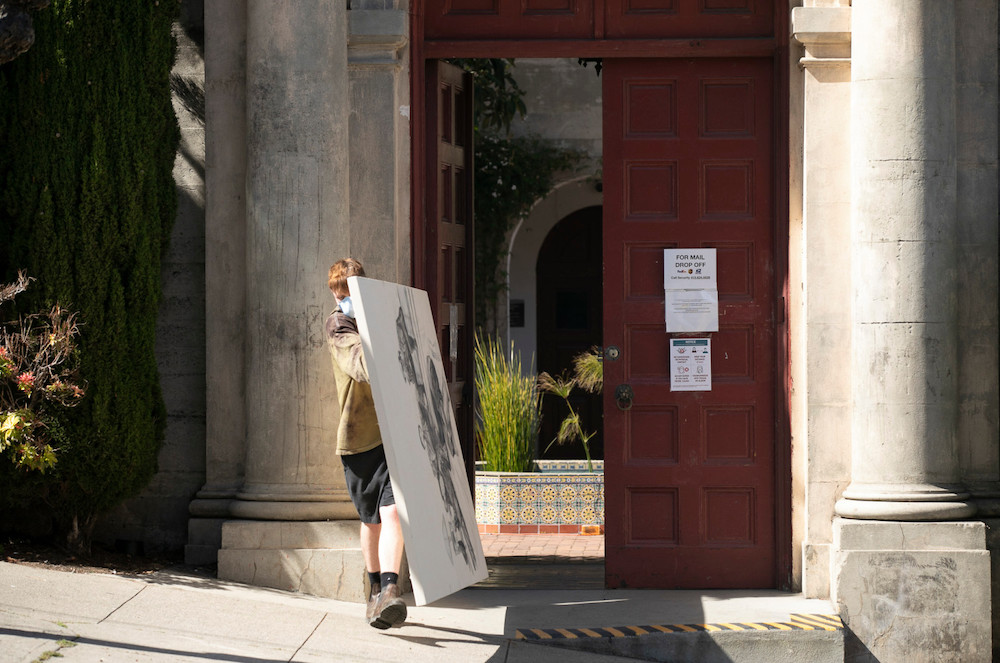 Painting major Nikolas Schumann picks up a canvas from the closed Chestnut Street campus of San Francisco Art Institute. Schumann says he will likely transfer to California College of the Arts next year to finish his degree. Photo by Anne Wernikoff for CalMatters

Nikolas Schumann was a community college student and budding painter when he first learned about the San Francisco Art Institute from a mentor. He visited the school, “absolutely loved” it, and decided to transfer there in 2018 after a large scholarship knocked his tuition from $46,000 per year down to $15,000.

“It just had so much history and was so diverse,” Schumann said. “They birth interesting and wild artists.”

But just a few months from graduation, Schumann’s plans are in limbo after the art institute, along with another Bay Area college, Notre Dame de Namur University, said last month they would not be enrolling any new students in the fall.  Art institute officials cited the coronavirus outbreak as a factor in their decision.

The news from the two schools — one a Catholic university that was the first in California to admit women in 1868, the other a fine arts academy that counts photographer Annie Leibovitz among its alumni — highlights the financial challenges facing the state’s small private colleges as the pandemic imposes new costs and throws the admissions cycle into turmoil.

Unlike public universities like the University of California system, private colleges cannot count on state tax dollars to keep them afloat. Many of their most attractive selling points, from charming campuses to face time with professors, no longer apply in a world where instruction has moved online. With families less willing and able to pay tuition that can reach $50,000 per year for what some have dubbed ‘Zoom University,’ the pandemic has raised fears that a growing number of independent colleges could scale back, merge or even shut down.

“Most schools do not have large endowments that could provide the rainy day fund that we need right now,” said Kristen Soares, executive director of the Association of Independent California Colleges and Universities, which represents private, non-profit colleges. “If this goes into the fall, it could be very devastating.”

Most at risk, experts say: less-selective residential colleges that are not well-known outside their local area. The Midwest and Northeast have seen a wave of closures among such schools. California, with its larger population of college-ready high school graduates, hasn’t yet — but the pandemic could change that.

The American Council on Education, a national association of colleges and universities, projects that enrollment will drop by 15 percent nationwide next year. Colleges have been refunding room and board charges after sending students home, and canceling commencements and other revenue-generating events.

Those costs are easier to weather for a university like Stanford, with its nearly $28 billion endowment, but could pose an existential crisis for a less-wealthy school, said Douglas Webber, a higher education economist at Temple University.

Think of it as comparing a corporate fast-food chain to a mom-and-pop restaurant, Webber said. “The giant chain is going to be able to find ways to cut back,” he said. “The small family restaurant, with the same percentage hit, it’s going to put them under.”

Nationally, he said, “I would be shocked if there aren’t a lot of closures within the next 12 months.”

Not just bastions of the elite, California’s private, non-profit colleges — which have a median endowment of just over $24 million — award about a fifth of the state’s bachelor’s degrees. About half of their students are the first in their families to attend college, often relying heavily on scholarships and loans to enroll.

When the Association of Independent California Colleges and Universities surveyed its members about the costs of the pandemic, 25 of 85 colleges responded, reporting collective losses of $150 million for the spring semester, Soares said. California’s independent colleges will receive $156 million in total from the federal stimulus bill called the CARES Act, with half the money directed to students as emergency aid and the remainder distributed in various amounts to the colleges. The organization still is tallying losses among independent colleges, Soares said, and has asked state lawmakers to ensure that federal relief money is available to private as well as public schools.

Many colleges have frozen hiring, including Mills College in Oakland, which took “a seven-figure hit” to revenue this year, according to its president, Beth Hillman. The 1,100-student liberal arts college for women and non-binary students has so far managed to avoid layoffs, she said, in part by shifting employees into other roles, like turning athletic coaches into counselors.

Mills already had taken steps in recent years to shore up its future. It slashed tuition, worked to attract more transfer students from community colleges, and filled empty dorm spaces with students from nearby, overcrowded UC Berkeley.

While she wasn’t worried about closing, Hillman said she expected the financial pain to worsen in the fall. “There are so many unknowns,” she said. “I don’t know how anybody could be unconcerned at this point.”

Liberal arts colleges often have less experience delivering classes online than large public universities. They are struggling to maintain a sense of community among far-flung students and faculty.

“For our undergraduates, we are a medium-sized liberal arts school focused on transforming students’ lives, so the transition online is challenging to our very purpose,” said Phil Phillips, the chief operating officer at Pepperdine University. “We always say that what goes on outside the classroom is super-important.”

To keep in touch, the Christian university has held Zoom chapel services in which students and faculty share, sometimes tearfully, about challenges like trying to teach online while caring for three small children, Phillips said.

Private colleges could also suffer if economic fallout from the pandemic prompts students to choose schools that are less expensive or closer to home, as some national surveys have found.

Michelle Myers, a college admissions consultant in the Bay Area, said she typically doesn’t hear much from her clients after they receive their admissions offers. But this spring, she has met with almost every high school senior on her list as they reassess their options. Many, she said, are considering taking time off or attending community college in the fall rather than going directly to a four-year school.

“Whether you’re paying for private or in-state public (college), it’s like, ‘Am I really paying this for online classes?’ ” she said. “If it’s a good fit and they really want to go to that school, most of them are thinking, ‘I’m going to try to defer.’ ”

Vince Cuseo, the dean of admission at Occidental College, said he’s also seen an unusually high number of requests to defer admission from students uncertain about the future.

Students are thinking, “’I’ve applied to these institutions and need to plop my money down, (but) I don’t have a sense of what that experience is going to be like in the fall,” Cuseo said.

Adding to the uncertainty is a rule change made last year by the National Association for College Admission Counseling that will allow colleges to continue recruiting students even after they’ve committed to other schools. That means even colleges with May 1 deadlines for students to send in deposits may not know by then what their fall classes will look like. Others are pushing back deadlines in response to the coronavirus.

“It’s one thing to gauge how many students made a commitment to a college in mid-April; it’s another thing to know how many will show up, if they can, in August for orientation,” said Cuseo.

On the plus side, the small size of some private colleges can make it easier for them to react to challenges quickly, Cuseo said. Since prospective students can’t visit campus, Occidental has given them access to videos from online classes being taught this semester and set up virtual panel discussions with current students involved in specific interests like student government and pre-health majors.

The University of the Pacific has made its financial aid packages more attractive with a $1,500-per-year grant for expenses due to the coronavirus, available to new and current students.

“When you have a professor with experience in the field who can schedule one-on-one meetings with students regularly, that’s much different than an 1,100-person class where faculty relies on teaching assistants and graduate students to try to have personal connections,” Hillman said.

Colleges that likely have the most to fear from the coronavirus are those that already faced declining enrollment and rising debt before the outbreak — as was the case with San Francisco Art Institute and Notre Dame de Namur.

“COVID accelerated the downward spiral,” San Francisco Art Institute Board Chair Pam Rorke Levy told alumni in a conference call April 20, after the college said it would help students transfer to other schools while it tried to come up with a new business plan.

The college had been discussing possible mergers with three other colleges, including the University of San Francisco, Rorke Levy said. But those negotiations “came to a grinding stop… the minute the shelter-in-place orders happened,” she said.

That left people like Nikolas Schumann, the art student, in a bind. He’s now trying to figure out which schools will accept his credits so he can transfer. The art institute has said it will continue instruction over the summer so students in their final year can graduate — but Schumann worries the plan, like so many others before, will fall through.

“It sucks when you’ve found the school you think is the one for you,” he said, “and it just shuts down.”