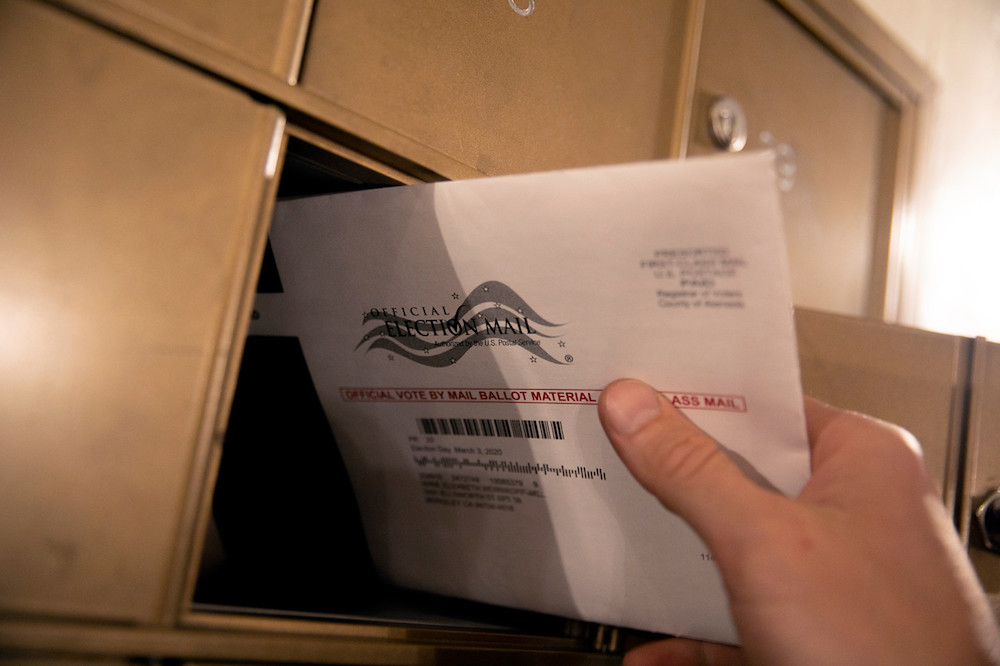 In the suburbs north of Los Angeles and in a sprawling Riverside County legislative district, political campaigns are figuring out how to engage voters without knocking on doors, how to raise money without gathering for cocktail parties and chili cook-offs, and how to make sure people vote in elections that will largely be held by mail.

While political candidates and election officials across the country are strategizing for November — considering how Americans will vote if coronavirus still is wreaking havoc on the nation’s norms — California is facing a more immediate test of politics in the pandemic: two special elections next month to fill vacancies in Congress and the state Legislature.

The May 12 special election amounts to “somewhat of a trial run in how do you conduct an election in a virtual space,” said Rusty Hicks, chair of the California Democratic Party.

“The door-to-door conversations that would be particularly important in a low-turnout special election, you simply can’t do those  — not in the same way you’ve ever done before.”

Hand-shaking and baby-kissing are out. Text messages, Zoom meetings, tele-town halls and social media posts are in.

“We’ve had to take mail, digital and phone up to the next level to supplement what we would normally be doing on the ground,” said Jessica Patterson, chair of the California Republican Party. “We are getting people together digitally instead of physically.”

For both parties, the competition is especially stiff in the race to replace Katie Hill — the Democratic congresswoman who stepped down last year after admitting to a relationship with a campaign staffer and accusing her ex-husband of releasing nude photos of her. Hill ousted an incumbent Republican when she won the 25th Congressional District that covers portions of Los Angeles and Ventura counties in 2018. Democrats are trying to hold onto the seat by backing Assemblywoman Christy Smith, and Republicans are working to win it back by supporting former Navy pilot Mike Garcia. Congressional campaign committees for each are pouring money into TV ads.

The Cook Political Report, which analyzes congressional races, previously considered Smith more likely to win, but recently deemed the race a toss-up, saying the pandemic “adds a lot of uncertainty” to political dynamics on the ground.

“Voters will automatically receive ballots in the mail, and voters stuck at home may have little else to do but fill them out and send them in,” Cook’s David Wasserman wrote, noting that might boost turnout and favor Smith.

“On the other hand,” he wrote, “the mandatory stay-at-home order quashes campaign field organizers’ ability to ‘harvest’ ballots at doors and turn them in,” which might skew the electorate in a way that favors Garcia.

(No matter who wins in May to complete the remainder of Hill’s two-year term, Garcia and Smith will face off again in November in a race for the term that begins next year.)

Patterson, chair of the California GOP, wrote a letter to Gov. Gavin Newsom Wednesday requesting that he suspend the law that allows voters to designate someone else to turn in their ballots, a practice known as “ballot harvesting” that Republicans blame for some losses in 2018, when Democrats deployed volunteers to collect ballots in key races.

“During these times, this activity presents an intolerable risk to public health and safety,” Patterson wrote.

In the congressional race, voters can mail their ballots or leave them at one of 22 drop-off boxes in Los Angeles County. The Registrar of Voters also plans to open nine locations where people can vote while following new safety guidelines that include six-feet of social distance and election workers wearing gloves and masks.

But in the race for a state Senate seat in Riverside County, Democrats are raising concerns about voting mechanics that provide few options for in-person balloting in a region unaccustomed to voting by mail.

California’s 28th Senate District stretches from Temecula east to the Arizona border, and has long been represented by a Republican. But the electorate has grown increasingly purple and Democrats now have a tiny advantage in the number of registered voters. Republican Assemblywoman Melissa Melendez and Democratic school board member Elizabeth Romero are competing to fill a seat left vacant when GOP Sen. Jeff Stone stepped down to take a position in the Trump administration.

“The Romero campaign has deep concerns about whether voters will have access to polling locations and places where they can drop off their ballots,” campaign consultant Lisa Gasperoni told CalMatters by email.

Riverside County is not opening any voting locations and plans just two ballot drop-off boxes in a district that spans more than 4,000 square miles.

“Some voters would have to drive at least an hour and a half to get there,” Gasperoni said.

Melendez said she’s using social media to remind voters that the election is at an odd time — in May — and will be held entirely by mail.

“We won’t be able to reach everybody — there still will be people who are confused as to why they’re getting a ballot in the mail — but we are just saying it as often as we can,” Melendez said.

“Hopefully everybody fills it out and sends it in, and doesn’t set it aside thinking they won’t need it until November.”

Melendez has the advantage in terms of money, having raised nearly three times as much as Romero. But fundraising has been hard for all candidates since the governor ordered Californians to stay at home to stem the spread of coronavirus. As an incumbent assembly member, Melendez would normally raise money at receptions with lobbyists in Sacramento and with a large breakfast in her community. All that’s been scrapped due to the pandemic.

Romero is trying to raise money with phone calls and Zoom meetings, Gasperoni said, but it’s challenging: “A lot of donors want to meet you and then people have fundraisers where people come together. We can’t do any of that, and to be honest, a lot of donors are facing a great deal of uncertainty themselves and are not as willing as they normally would be to try to help.”

But the party will likely see financial losses itself. The California Democratic Party has called off two major spring fundraising events — the Speaker’s Cup and the Pro Tem’s Cup, which allow donors to spend a weekend golfing with Democratic legislators.

California Republicans moved a fundraising luncheon with national GOP chair Ronna McDaniel to a Zoom call, Patterson said, but have not yet canceled a June fundraising dinner at a Napa wine cave.

Campaign finance reports show both state parties raised more in the six-week period that ended in late March than in the first six weeks of the year, before the pandemic turned life upside down.

“We haven’t seen the drop off yet,” Patterson said. “But it’s something we are keeping our eye on.”