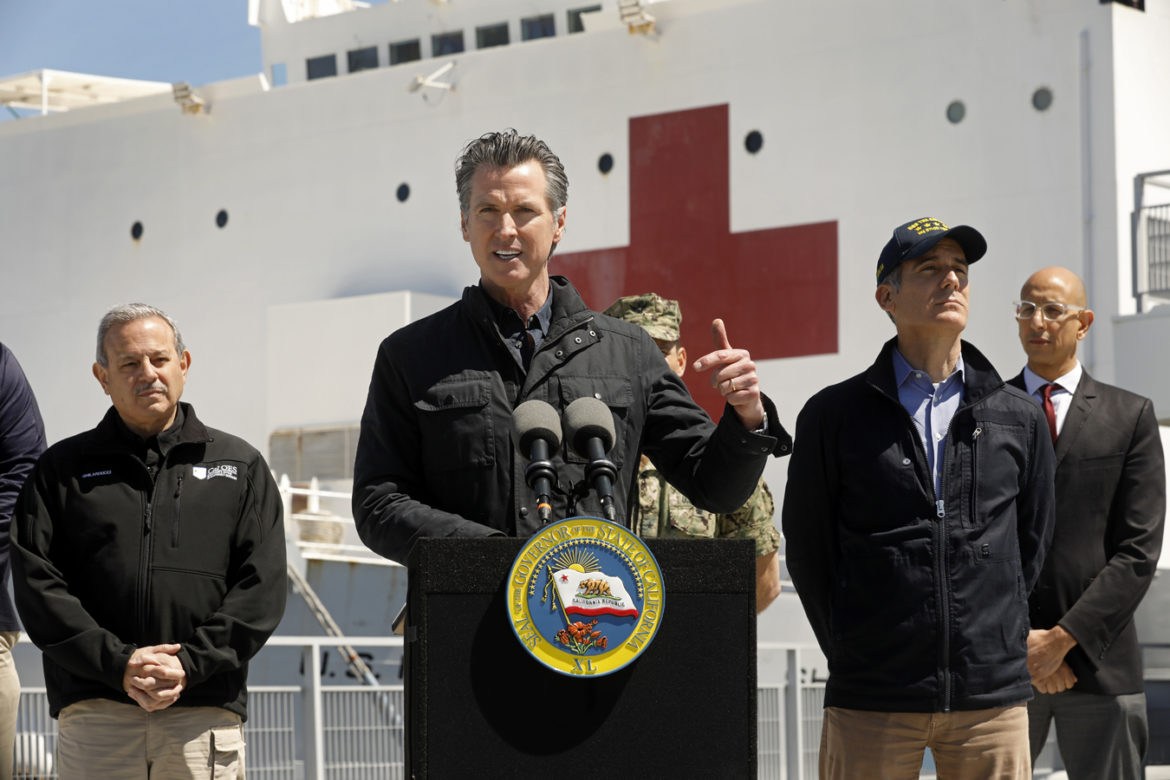 This was supposed to be a big health care year for California.

Democratic Gov. Gavin Newsom in January unveiled ambitious proposals to help him achieve his goal of getting every Californian health care coverage. Though it was far less than the single-payer promise Newsom had made on the gubernatorial campaign trail, his plans, if adopted, would have expanded the health care system as no other state has.

His $47 billion health care agenda, fueled by a once-booming economy and pressure from legislative Democrats, sought to expand the pool of undocumented immigrants covered by Medicaid, enable California to manufacture its own generic drugs, pour billions into the Medicaid program to address chronic homelessness and dramatically increase mental health and addiction treatment statewide.

Then, the novel coronavirus swept in, decimating those ambitions.

“The world has radically changed,” Newsom said this month, as he prepared California for a mid-May surge in COVID-19 hospitalizations.

Once buoyed by record economic growth and a $21 billion rainy-day fund to protect California from a major downturn, Newsom warned of a “budgetary crisis that is starting to manifest,” suggesting he can no longer follow through on his health care promises.

“All of that is being recalibrated,” he said.

But Democratic lawmakers who control both houses of the state legislature — and will negotiate with Newsom over the scope of the 2020-21 state budget — aren’t necessarily convinced they have to abandon their plans.

“If those workers providing the products, the services, the food that we eat don’t have health care, we’re all in danger,” said state Sen. Maria Elena Durazo (D-Los Angeles), who has pressed Newsom to expand Medicaid coverage to unauthorized immigrants ages 65 and up. “Our reasoning is a lot stronger now because if they don’t have health care, it weakens our ability to stop the spread of COVID-19.”

Newsom says he has no choice but to scale back his initial $222 billion state budget proposal.

The state may be able to fund only existing programs and coronavirus response and recovery, said state Finance Director Keely Bosler. There could even be cuts, she warned.

Exactly how much money will be available to keep the state running will not be known until mid-May. The legislature, which recessed in mid-March in the midst of the pandemic, isn’t scheduled to reconvene until May 4 and may conduct business remotely for the remainder of the session.

“It is going to be bad, but we have not yet been able to determine how bad because of the fluid and dynamic nature of this pandemic,” said H.D. Palmer, spokesperson for the state Department of Finance. “Clearly what we are in the midst of is much more severe than a midpoint recession.”

Meanwhile, the state has already begun draining its rainy-day reserves and spending from its general fund to respond to the crisis.

Newsom has spent more than $850 million in response to the pandemic, such as boosting California’s supply of ventilators and other protective gear needed for a projected surge in COVID-19 cases. On Tuesday night, he announced the state had inked a $1 billion deal to get 200 million masks per month — enough for California and possibly to share with other states.

Newsom is also funding food and senior assistance programs, sending money to counties to house more jail inmates while state prisons temporarily pause intake, and paying for hotel and motel rooms for homeless people. And the state will help pay nearly 40,000 health care workers it is recruiting for the surge.

Some of the costs will be reimbursed by the federal government, Newsom said, but it’s not clear how much.

Not long ago, Newsom and the legislature were in a very different place, enacting policies that made California a national testing ground for expanding health coverage.

Last year, they approved a $100 million-per-year expansion of Medi-Cal to low-income undocumented immigrants ages 19 to 25, earning praise from national party leaders and ire from President Donald Trump. And they approved $1.5 billion over the next three years to fund new subsidies for some low- and middle-income Californians purchasing health coverage on the state health insurance exchange, Covered California.

This year would have been even bigger.

“We have a unique responsibility to show the way,” Newsom said in January.

Newsom sought to funnel state and federal Medicaid dollars into emergency rental programs to help homeless people get housing, and to bolster treatment for substance use disorders and mental health for homeless people, at-risk youth and incarcerated people.

Democratic leaders and even Republicans embraced his focus.

“California is certainly the most aggressive at trying to push towards universal coverage,” said Larry Levitt, executive vice president for health policy at the Kaiser Family Foundation. (Kaiser Health News, which produces California Healthline, is an editorially independent program of the foundation.)

“Typically, you find states focusing on either cost or universal coverage, but what sets California apart is a drive to deal with both.”

“We’re going to have to be very disciplined,” Ting said. “I don’t think we’re going to spend money on much else other than coronavirus and economic recovery.”

But others argue that proposals to expand coverage and access are even more pressing because of COVID-19.

“Every person who can’t get health care and gets sick could potentially spread the disease to more people. We need to take care of that,” said state Sen. Richard Pan (D-Sacramento), who chairs the Senate Health Committee and leads the state Senate budget process for health-related expenditures.

Advocates and lobbyists also are flooding Newsom with budget request letters asking him not only to stick with existing proposals, such as protecting people from getting hit with surprise medical bills, but also to expand coverage even more and increase state subsidies for insurance.

Doctor groups are asking the governor to provide relief for health care providers who have lost income due to declines in patient revenue, while organized labor is asking him to assist businesses so they don’t cut health employee health benefits.

County behavioral health directors argue the state must fund more mental health and substance use disorder treatment because the need is greater today, especially for students who can’t attend school and for those who have lost homes and work.

Although Newsom has sought to quell the spending push by health advocates, he said Saturday that health care remains a top priority and he’s “committed” to adopting reforms within California’s budgetary constraints — even if it might not happen this year.

“We will do everything in our power to lean into the future despite these circumstances,” he said. “Reforms can happen on a good day or a bad day.”