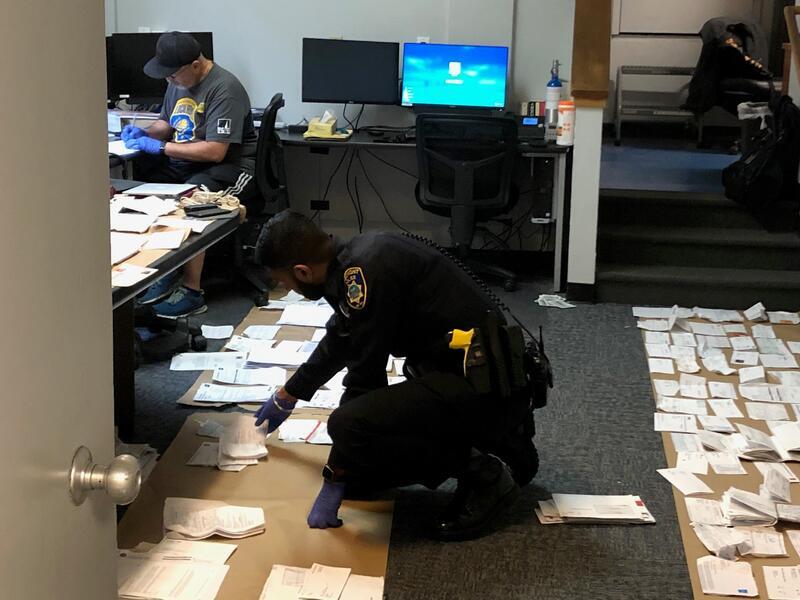 PPD sorts through 300 pieces of confiscated mail in 2020.

On Friday, Apr. 10 at 6:56 a.m. Piedmont Police Department received a call from a Piedmont resident who observed a female taking mail out of a mailbox. Officers responded to the scene at Oakland Avenue and Olive Avenue.

The female suspect was identified as Jeannette Barickman, 48, who was unsheltered and residing in Oakland. Police received consent to search Barickman’s items. The officers noticed she had a heavy volume of mail and realized the mail was not addressed to her.

A large number of the stolen pieces contained sensitive and confidential material.

“Within the items that were eventually taken from the suspect were everything from passports, driver’s license, college diplomas, government paperwork, DMV registrations and checks from different entities,” said Piedmont Police Capt. Chris Monahan. “It appears at this early stage of our investigation that she may have been stealing mail for some time and slowly collecting it.”

The 300 pieces of mail, both opened and unopened, had dates as far back as October 2019. The addresses came from multiple counties – Alameda, Contra Costa, San Francisco, and San Mateo. Roughly four items were taken from Piedmont addresses (all Sunnyside Avenue). The majority came from the North Oakland area.

Because mail theft is a federal crime investigated at a secondary level, Piedmont Police are currently working in conjunction with the United States Postal Service postal inspector.

The inspector will examine the mail, then contact individuals identified through the addresses. Piedmont Detective Jeff Spranza stated that if at least 10 victims are identified, Barickman would be charged with a felony, punishable by up to a year in jail. “Depending on what the postal inspector finds, the charges could really mount,” backed Monahan.

Barickman — who was previously charged in 2017 with possession of methamphetamine — was identified, cited. and released at the scene. Alameda County has stopped bookings indefinitely because of the coronavirus pandemic.

“If it’s not a violent crime against a person, transporting somebody to jail just affords them the ability to be released immediately,” explained Monahan. Barickman was given a future court date to appear on.

Piedmont Detective Jeff Spranza would like to remind residents to keep an eye out for their mail and sign up for a postal notification service. “Especially during tax season, this is when we see a lot of mail theft happening,” said Spranza.

“Anything that comes from the state or federal government has some type of personal information. Even if one piece of mail gets in the wrong hands, someone could open up a fraudulent account.” Spranza also suggested signing up for online billing and using locked mailboxes.

PPD would like to make residents aware of a service provided by the USPS called “Informed Delivery.” This service provides customers an email with pictures of what you can expect in your mailbox that day. Sign up for informed delivery at: https://informeddelivery.usps.com/box/pages/intro/start.action