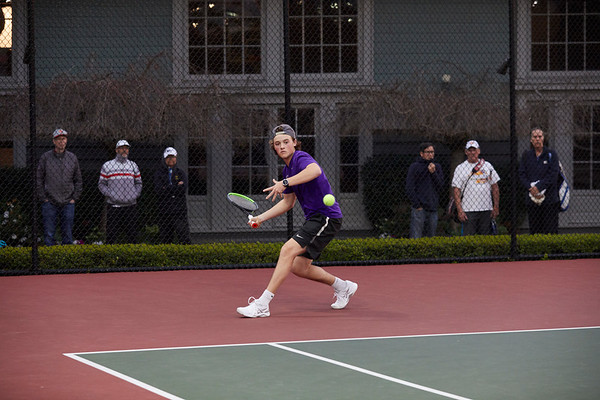 The good news is that there are projects around the Lalli house. Piedmont High School senior Nick Lalli and his father recently tackled that old rotten staircase in the backyard.

“We rebuilt them,” Nick Lalli said. “It was a weeklong project.”

That’s making the best of a disappointing spring sports season. Lalli was just starting his senior year with the tennis team when sports were shut down due to the COVID-19 virus.

“This year we had an amazing start to the season,” he said. “We won the Fresno tournament for the first time ever. It’s a bummer it was cut short.”

Lalli is the youngest of three brothers. Joey Lalli played tennis and soccer at Piedmont, while Drew played golf.

Nick Lalli played everything growing up: baseball, soccer, basketball, flag football. By the time he got to Piedmont High, he was playing tennis and basketball. He dropped the latter after his freshman year.

“Basketball, there were other players that were better than me,” Lalli said. “I’m just better at (tennis) compared to basketball.”

Some tennis players appreciate the individualism of the sport, but Lalli said he actually prefers team sports.

“I love the team-oriented sports,” he said. “I definitely miss that. You definitely don’t get the same team aspect in tennis as you do in basketball.”

With school now online and tennis season canceled, Lalli is reconnecting with other fun outdoor activities.

“I’ve started mountain biking up Joaquin Miller,” Lalli said. “I haven’t done it often. But every summer, we’d go up to Oregon to Sun Valley. I’ve always known I liked it. I never really did it in the Bay Area. The other day, I went on a 14-mile mountain bike ride through Joaquin. It was really fun.”

Another project was building a pegboard for climbing in the basement.

Lalli’s outdoors bent makes it little surprise that he’ll be off to Boulder in the fall to attend the University of Colorado. He said the area has so much of what he loves on offer.

“I plan on trying out for the club (tennis) team, do some intermural basketball and frisbee,” Lalli said. “Skiing, mountain biking, and climbing. It just has all the activities I could ever want. I can be more active there than I ever was here.”

He’s hopeful that he’ll be able to enroll in real, live classes in the fall – he said he would defer enrollment to the spring if classes were still online.

“I think freshman year is crazy important to get used to the campus,” he said. “I’m thinking I want to defer. I know a lot of people are thinking the same thing. Because no one wants to pay that much money to take online classes their freshman year of college.”