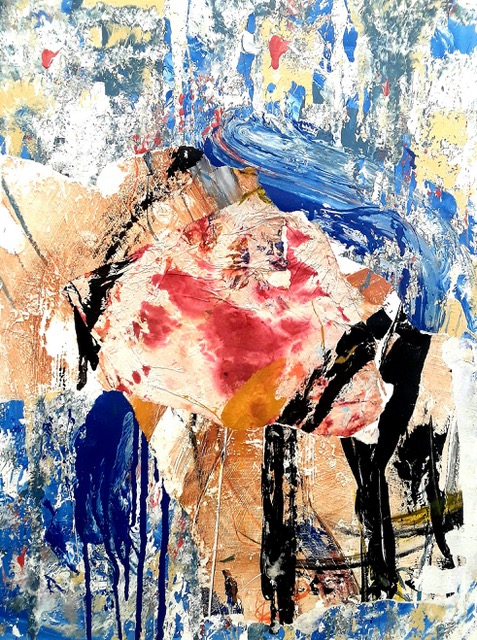 This is the first in a series of articles profiling the four artists (Carl Heyward, Akiko Suzuki, Colleen Gianatiempo and Usha Shukla) who were planning to exhibit in a group show at the Piedmont Center for the Arts called “A Boundless Moment” during the final weekend of May 2020.  The show has been postponed due to the current health crisis.

Artist and writer Carl Heyward is way ahead of most of us, having harnessed the power of collaborative art-making across long distances, far greater than 6 feet, back in 2011. That was when many of us still considered social media an optional activity — and well before the 2020 global pandemic pushed us into utter dependence on the digital public sphere.  In 2011, Heyward who lives and works in Benicia, California, began with artist Lorna Crane of New South Wales, Australia, a mail art project called KNEE(jerk) Fragmentation. The idea consisted of a one-for-one exchange of post card sized art works made exclusively for the project, and by 2012 had grown to include 500 artists who produced over 3,000 individual works of art.

The success of this project led Heyward to found the Global Art Project along with four artists based in Australia, Israel, Japan and Korea. Now, nearly a decade later, GAP is an international mixed-media collaborative collective of 50 artist members from more than 12 countries, with the shared purpose to ‘promote the creative intelligence of the Global Arts Community’.

Heyward (b.1951), is a mixed media artist whose paintings have a basis in the assemblage, or collage, method. Using a combination of ‘fractured or fragmented’ images, torn papers, textiles and objects Heyward assembles images that deliver a specific emotional and intellectual punch.

As in the work of American mid-century painter Robert Rauschenberg, who was an early influence for Heyward, Heyward builds his final image with paint, ink and various kinds of marks. Frequently Heyward’s paintings contain large areas of clear, white space which have the effect of drawing the viewer’s eye directly to areas of concentrated energy and power. This contrast between intensity and calm gives the viewer opportunities for both engagement and reflection; the contours provide a path to follow.

In person, Heyward is a charming and gregarious conversationalist, energetic, kind and thoughtful, and someone who is adept at keeping the chaotic gloom and doom of headline news on the periphery.  The connection between artist and art is readily apparent. When describing his artistic process, Heyward mentions his use of both the physical and the mental elements of past and present reality and his need to combine these when creating art.

Heyward, who is African American, compares his experience of spending the first 12 years of his life in the relatively unremarkable multi-cultural environment of Washington D.C. with the sudden immersion into American racial politics he experienced when the family relocated to Atlanta, Georgia in the early 1960’s.

His father was an epidemiologist at the Centers for Disease Control and Prevention, and family dynamics stressed the importance of academics and discipline. Yet for Heyward and his brother, the move meant immersion in a culture that was still a long way from resolving the conflicts of the past. Heyward began at this young age to cultivate a lifelong philosophy around inclusion, valuing differences, and the necessity of acceptance and humility.

These early awakenings of self within the context of the wider world led Heyward to art making as a way of expression.

While pursuing a degree in Political Science at Georgia State University, Heyward became interested in photography. Studies at the Visual Studies Workshop in Rochester, New York  and the San Francisco Art Institute led to a professional career in radio, print and film. Eventually Heyward taught Film and Video production in the MFA program at San Francisco Academy of Art, as well as serving as an advisor to painting students.

The cumulative effect of these varied life experiences has led Heyward to develop the twin ideas of ‘Fragmentation’ and ‘No/MIND’ as ways of democratizing the art process for students in his workshops as well as the professional artist members of the GAP project.  These two ideas, along with the concept of collaboration are what drive the success of Heyward’s GAP project. Fragmentation is the practice of combining all sorts of elements (FRAGS in Heyward’s terminology) to create something new. No/MIND is a way of working without preset expectations and allowing the unconscious and experimental aspects of the combination of the materials lead to discovery.  GAP members collaborate through the organized use of social media, old-school mailing of packets of FRAGS to each other, and real world art exhibits in cities across the globe. All of this has resulted in the creation of a community of artists who have seen their personal practices grow in creativity and depth.

For Heyward especially, the boundaries between art and life have been erased.  In addition to his studio practice, he teaches art workshops, does the administrative work for the GAP network and shows globally, conducts an artist mentoring program and regularly travels to far flung GAP residencies around the world.  Most importantly, Heyward met his wife, artist Akiko Suzuki of Osaka, Japan, through the GAP project. Suzuki, an award winning textile artist, and Heyward share a combined studio/living space in Benicia, CA. A future article will feature Suzuki and her work.

On the day I caught up with Heyward via Zoom, Californians were well into the third week of shelter in place orders due to the specter of the coronavirus.  There was no doubt of the sobering effect of the unseen threat on Heyward, case in point being the postponement of the May 2020 show at the Piedmont Center for the Arts.  Yet he and Suzuki were fully immersed that day in the unavoidable realities of packing up and shipping art from Gallerie Renee Marie, a gallery that they jointly manage and curate.  And both Suzuki and Heyward were finding time to create new work in response to the social distancing and global sadness related to the virus. True to form, Heyward in particular was drawing strength from the support he could give and receive from the global network he has created.

7 thoughts on “In The Artist’s Studio: Carl Heyward”