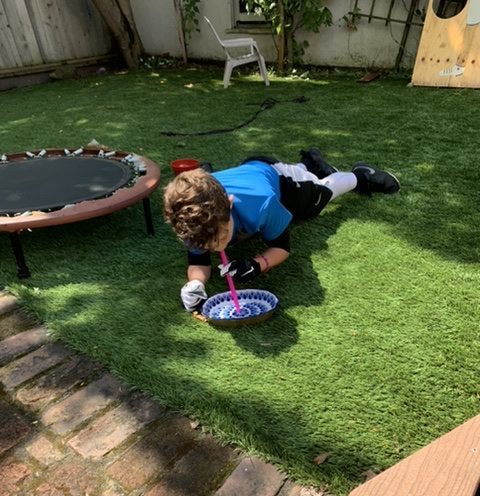 So one of my jobs during SIP is to run PE for my three high-energy boys. We’ve moved from basic push-ups to medicine balls, tug-of-war, etc. and are trying to have fun with it. Our least favorite activity is the plank so we make it competitive.

A few weeks ago my middle son, Gael (3rd grader at WW), won with his personal best of 6 mins and 3 seconds. Well, we ended PE today with another contest which I figured would go for 5-6 mins. Our 6-year old made it to 20 seconds before getting wiggly, older brother Joaquin reached his PR and so did Dad while Gael cruised past 6 mins. Gael then cruised past 10 mins, then 30. and jokingly said he thought he could get to an hour. I promised him a prize if he reached an hour and Fenton’s ice cream for the whole crew.

Well, the brothers got really into it and cheered him on past an hour. But Gael wasn’t finished. We gave him water, some snacks, and Gatorade Zero (no sugar!) and watched in amazement as he pushed past an hour and a half. At this point he began to perspire quite a bit and his arms began to hurt from the burn of the turf. In retrospect, we should have given him a pad but we had no idea. Well, he made it to an hour and 46 mins and 18 seconds.

Late this afternoon we celebrated with a scoop of ice cream at Fentons. At least one of us will leave this crazy SIP period with a six pack! Happy planking!

2 thoughts on “How we SIP: Fierro boys planking competition”