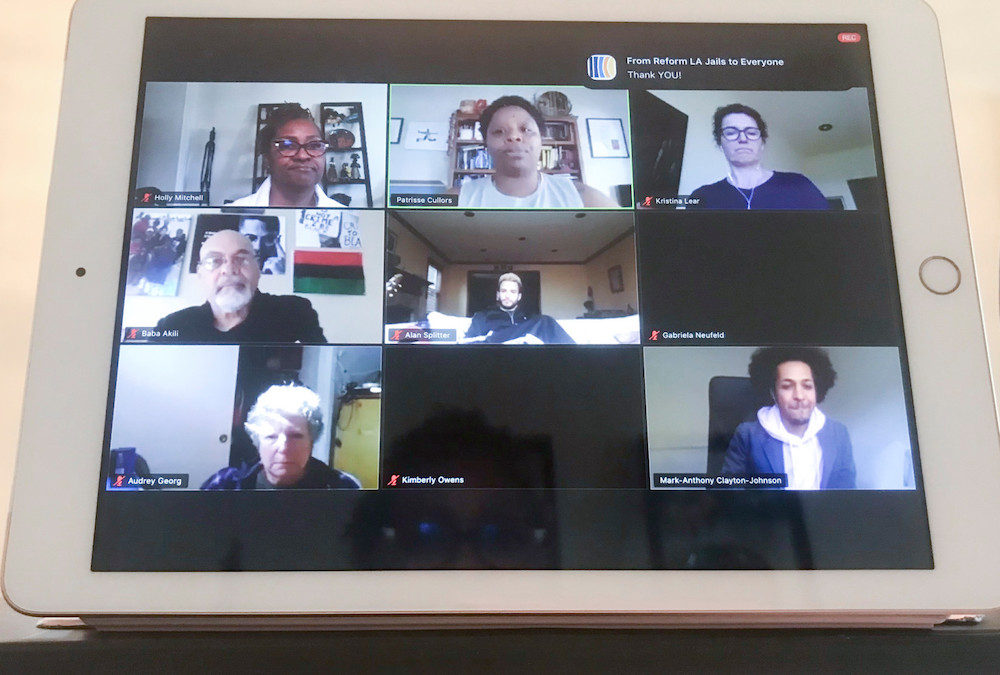 When criminal justice advocates got together recently to lobby California lawmakers for changes to the state’s prison system, they gathered as so many of us do these days: on a video conference.

With the state under government orders to stay home to curb the spread of coronavirus, Assemblyman Reggie Jones-Sawyer listened to the advocates’ pitches — for bills related to parole and wages for incarcerated workers — and then delivered some blunt news.

“We cannot carry the bill load that we’ve had in the past,” the Los Angeles Democrat told them. “We just won’t have the capacity to handle everything.”

Lawmakers will not return to work at the Capitol until at least May 4, and it could be later if California’s current state of emergency persists. The pandemic has caused an unprecedented interruption in legislative business, with lawmakers working from home and adjusting to a new focus on the health and economic consequences of coronavirus.

In the three weeks since they left Sacramento, legislators have been spending more time helping constituents — handing out free meals, helping people file for unemployment, connecting business owners to financial assistance — and less time working on legislation. When they do return to the Capitol, lawmakers will face a session unlike any in recent memory — with far fewer bills and a shrunken state budget.

“The world has radically changed since the January budget was proposed, so everything is on the table,” Gov. Gavin Newsom said Thursday, calling the $222 billion spending proposal he presented at the start of the year “inoperable.”

Skyrocketing unemployment and a crashing stock market mean less revenue will be coming to the state. The Assembly’s budget chair has sent a memo to colleagues telling them to pare down their ambitions accordingly.

“I do not believe we will have the resources to fund many Member priorities this year, beyond a small few that deal with the response and recovery to COVID 19,” wrote Assemblyman Phil Ting late last month.

And Assembly Speaker Anthony Rendon told a college class recently that the number of bills lawmakers will hear this year will likely be trimmed to around 600 or 700 — from the more than 3,000 that have been introduced — and that responding to the coronavirus is the top priority.

California’s Legislature hasn’t stopped its normal workflow like this since 1862, when a flood covered Sacramento streets and lawmakers relocated to San Francisco, according to legislative historian Alex Vassar. Now, the National Conference on State Legislatures says, it’s one of at least 26 states that have halted their legislative sessions in response to the coronavirus pandemic.

Most of them are grappling with the mechanics of running a government from the confines of home.

“There has been a flurry of activity on the question of whether voting during session can be done virtually. In most legislatures, the answer is no,” Natalie Wood, a director at the National Conference on State Legislatures, said on a podcast about government response to the coronavirus.

The answer in California is more nuanced. Before leaving the Capitol the week California’s coronavirus shutdown began in March, the state Senate passed a rule allowing senators to meet and vote remotely, such as by phone or videoconference, during a state of emergency. The Assembly did not pass a similar rule, and would probably have to reconvene in person to do so.

“Nothing in California law prohibits the state legislature from conducting its business remotely, with members distancing themselves to prevent infection during this pandemic emergency,” said David A. Carrillo, executive director of the California Constitution Center at UC Berkeley’s law school. “Of course, the Legislature will need to provide public access to its open sessions.”

It’s not yet clear how the Legislature will achieve that, or whether remote decision-making will be necessary. If lawmakers reconvene in May or June, they can still meet the constitutional mandate to pass a budget by June 15th.

“That’s the one deadline we can’t change,” said Assemblyman Vince Fong, a Bakersfield Republican who sits on the budget committee.

Deadlines for passing bills are a lot easier to change during the session that ends on Aug. 31. Lawmakers have been busy figuring out how to lighten their load, so they’ll have fewer bills to process when they start voting again. Already moved to the back burner: Assemblyman Miguel Santiago’s measure to give community college transfer students two tuition-free years at the California State University, and Assemblywoman Lorena Gonzalez’s bills to extend a tax break on diapers and expand civics education.

“We are looking through all our bills and saying, ‘Is this necessary this year? Does it relate to an economic issue we need to deal with?’” said Gonzalez, a San Diego Democrat.

She and other members of the Legislature’s Latino Caucus are still pushing for the state to expand government-subsidized health care to cover undocumented residents over age 65. Newsom proposed doing that in his January budget — at a cost of about $80.5 million in the first year and about $350 million annually in the future — but deflected when asked Thursday if he still sees it as a priority.

“I expect that the governor will live up to his commitment, and nothing that has happened makes it any less urgent. It’s actually more urgent now,” said Sen. Maria Elena Durazo, who has been volunteering at a Los Angeles food bank, where she recently loaded bags of apples and frozen chicken into people’s cars.

But another Los Angeles Democrat said she doesn’t think Newsom will continue backing spendy proposals from January, such as extending Medi-Cal to undocumented seniors.

“I don’t think we should expect to see any of that,” said Sen. Holly Mitchell, who chairs the Senate’s budget committee. Instead, she’s expecting “a keep-the-lights-on kind of budget.”

Mitchell, like a lot of Americans, has adjusted to wearing sweats instead of suits and taking video conferences instead of in-person meetings. Other lawmakers have found that their workdays now include new tasks like walking the dog, making snacks for the kids or overseeing online math lessons and grammar worksheets.

“My four-year-old loves to come over on Zoom calls because he knows that if he waves, 15 people will wave back,” said Assemblyman Jesse Gabriel, a Los Angeles Democrat (whose time at home has also included a crash course in how to cut his boys’ hair).

And there’s a lot of multitasking.

Assemblyman Santiago was walking his German Shepherd puppy through his Boyle Heights neighborhood last week while pushing his 3-year-old daughter in a stroller and talking to a CalMatters reporter by phone. Four minutes into explaining his new legislative priorities, a more pressing local issue arose.

“Hey, what’s going on brother?” Santiago said to the police officer who had stopped to talk to him.

He updated Santiago on a recent homicide in the neighborhood and reports of increased gang activity since schools were dismissed. Santiago promised to talk to local nonprofits about providing daytime activities for kids out of school.

It was an indication of how life is changing for so many legislators during the pandemic: Removed from Sacramento, its lobbyists and the rituals of political power, they’re returning to an old-school style of public service.

Or, as Santiago put it: “You stay hella connected.”