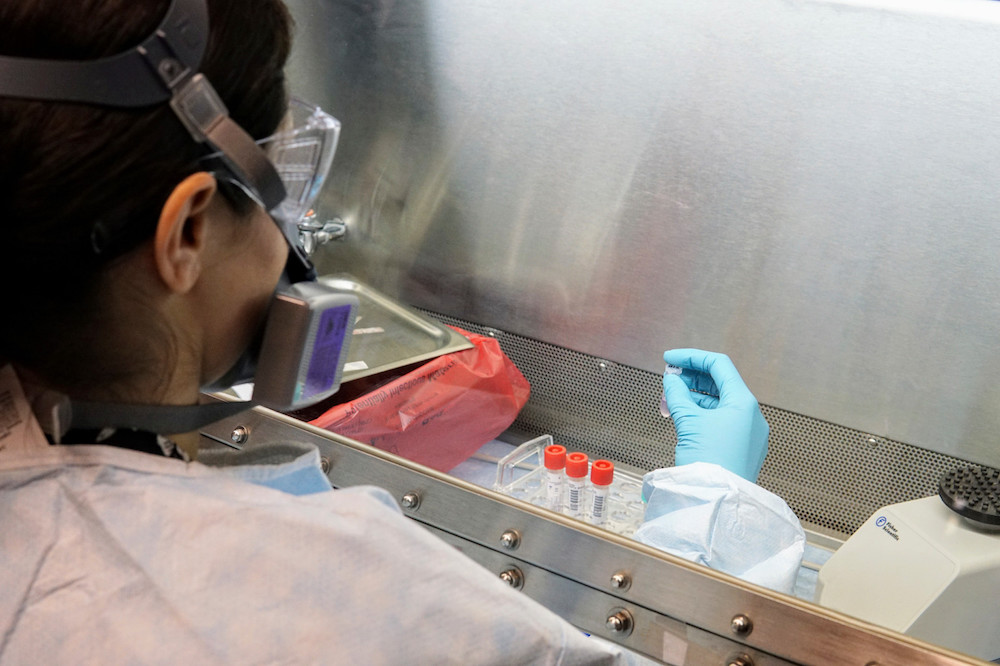 California is finally making a dent in the backlog of tests for the novel coronavirus that, at peak, left 65,000 people waiting to find out if they were infected. But that still isn’t good enough, California Gov. Gavin Newsom said in a briefing Saturday where he announced a new effort to increase daily tests five-fold.

The effort, helmed by a new testing task force, will create five to seven of what Newsom called testing “hubs” in partnership with UC San Diego and UC Davis. The goal is to increase high-capacity testing and end a massive backlog that, at times, has left people waiting as many as 12 days to receive results.

“All of that frustrating you, certainly frustrating me,” he said. “The testing space has been a challenging one for us, and I own that, and I have a responsibility as your governor to do better, and to do more testing in the state of California.”

Newsom’s latest update tallies 126,700 people who have been tested for the virus that has landed at least 1,008 people with confirmed infections in the intensive care unit, and killed more than 237 people.

Of those 126,700 people tested, 13,000 are still waiting on results, Newsom said. It’s a sharp decrease from the 59,500 tests with results that were still pending as of Thursday. But it’s still not good enough, Newsom said.

Newsom attributed the backlog in part to reporting from one of California’s largest counties — he did not say which one. Slowdowns have also come from the commercial labs handling testing for California, and Newsom commended them on the new numbers: “We congratulate them for the good work.”

Across the nation, testing for the novel coronavirus has lagged — hampered by both bureaucratic slowdowns and technical flaws.

After opting to design its own test rather than using an existing protocol published by the World Health Organization, the Centers for Disease Control and Prevention distributed glitchy tests that produced uninterpretable results. And it took the Food and Drug Administration until the end of February to give labs the go-ahead to create tests themselves.

Since then, the CDC has corrected the flaw in its original test, but the testing supply chain remains riddled with shortages. First, labs in California reported that they were missing key ingredients for extracting genetic material — including the virus’s — from patient samples. Then, the swabs for collecting those samples became scarce.

Competition for supplies is a source of anxiety even at UC San Diego, where David Pride, associate director of the clinical microbiology lab, says the team aims for a 12-hour turnaround on test results.

“We’ve got a lot of anxiety for manufacturers that they will make us promises about what they can give us, and then a few days later, they will have had to make other people promises and they can’t meet both promises,” Pride said. “The truth of the matter is that we are competing with the folks down the street, even in San Diego, as well as competing with the folks in Northern California all for basically the same sort of slice of the pie, so we can test our patient population.”

It’s a common story across California. California counties also report supply delays that have hamstrung their ability to run tests themselves, Capital Public Radio first reported on Thursday. Madera County’s new, state-of-the-art laboratory, for instance, has a machine to run tests by Cepheid, a company with offices in Sunnyvale that created a point-of-care test with a 45-minute turnaround — but without supplies, the county is forced to send its tests to other labs.

“We only had the capacity to be able to expand using the Cepheid machine,” Sara Bosse, the Madera County public health director, told CalMatters. “We were really counting on Cepheid providing us with the testing media for our existing equipment so we could start doing more testing in our local public health laboratory.”

A spokesperson for Cepheid could not be reached via phone or email over the weekend.

As cases of the novel coronavirus balloon in California, testing has lagged — particularly at commercial labs.

Mike Geller, spokesman for commercial testing company Labcorp, told CalMatters on Tuesday that its turnaround time was from four to five days; Kimberly Gorode, spokeswoman for Quest, said Friday that Quest’s was the same.

Newsom acknowledged the shortfall in California’s coronavirus testing in his Saturday briefing, saying, “I own that, and you deserve more and better.”

To that end, he announced that he had formed a testing task force helmed by Charity Dean, assistant director at the California Department of Public Health, and Paul Markovich, president and chief executive officer of Blue Shield of California.

He also alluded to a new test created at Stanford University to determine if someone has developed an immune response to the novel coronavirus. The test has not yet received FDA authorization, but Newsom said he was expecting that to change, soon. “It’s literally forthcoming, and that means within hours, not just days,” he said.

The new task force aims to create from five to seven high-capacity testing hubs through a new partnership with UC Davis and UC San Diego.

Newsom said the state will work with different vendors for tests at these hubs. But he specifically called out Abbott Laboratories, which recently received an emergency use authorization from the FDA for a quick-turnaround test that Abbott claims takes only five minutes.

Kaiser Health News reported on Thursday that state and local public health labs across the country were set to receive only 5,500 Abbott tests purchased by the federal government.

“Beyond this purchase, we have already shipped more than 190,000 ID NOW rapid tests to customers in 21 states,” John Koval, a spokesman for Abbott, said in an email. “We’ve been in close coordination with U.S. federal and state authorities – as well as our customers in urgent care clinics, hospital emergency departments and physicians’ offices – to ensure ID NOW instruments and tests are sent to outbreak hotspots.”

Newsom said Saturday that 13 hospital systems in California would partner with Abbott, which had committed to 75 testing sites across the state.

Newsom did not say how the task force would prioritize where to locate these new hubs, and which communities would receive increased testing capacity. In response to an emailed inquiry, the California Department of Public Health said the biggest challenge right now is shortages in the supply chain, and the goal is to ensure all Californians who need testing can access it.

“We will evaluate all current sites for specimen collection across the state and determine where additional sites are needed, including in rural and underserved communities, and work toward establish[ing] specimen-collection sites in those additional locations,” an unnamed spokesperson said via the collective press email account. “This is not just ‘hot spots’ but spans across the entire geography of the state.”