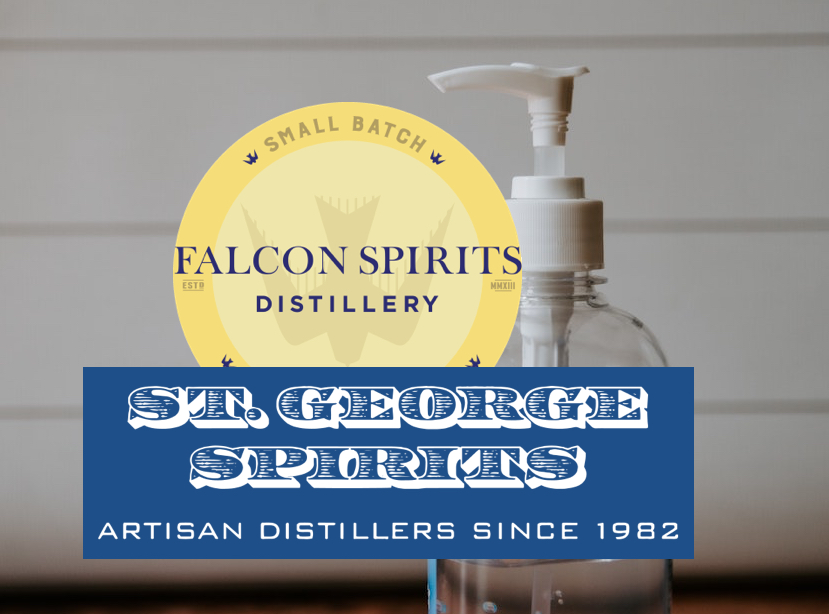 Two East Bay distilleries have traded bottling gin for bottling hand sanitizer as COVID-19 spread continues to be a concern. Richmond’s Falcon Spirits Distillery and St. George Spirits in Alameda, have joined the fight against the virus by shifting their operations to produce much needed hand sanitizer for first responders.

Falcon Spirits Distillery was an early adapter. Known for its award-winning gin and Amaro, Falcon is owned by Farid Dormishian, who studied biochemistry at UC Berkeley and has a background in biotech, pharma, and virology, making him hyper aware of the threat of coronavirus early on. At the end of February, Dormishian noticed stores in Berkeley had run out of hand sanitizer, so he sought approval through the Alcohol and Tobacco Tax and Trade Bureau, Food and Drug Administration, and the department of Alcoholic Beverage Control to pivot his operation to hand sanitizer. By the beginning of March, Dormishian received approval and began production. This pivot required the distillery to halt all usual production, order supplies, and devote all resources to making hand sanitizer.

Falcon Spirits began by donating its hand sanitizer to first responders, local restaurants open for take-out, and high-risk volunteer groups, but as the orders grew to thousands, it had to begin charging something, essentially the cost of the hand sanitizer without the cost of labor.

“First responders, police, nurses, firefighters have to have contact with other individuals at a much higher rate and are in contact with individuals that are at high risk of having the disease. So they need to be more protected because they don’t carry a sink with them when in the field, said Dormishan. “I really wish we could provide for everyone and at no cost, but our small distillery with our limited resources had to make a decision, and take the most logical step.”

One of the hurdles Winters faced was having to do something counterintuitive to a good distiller. “The biggest change has been making our alcohol undrinkable!” said Winters. “In order to use ethanol in a hand sanitizer, it has to be denatured, which involves adding a chemical that makes it undrinkably bitter.” he said. “Additionally, the containers and inactive ingredients that go into making hand sanitizer are things that we don’t ordinarily use, so identifying and utilizing a new supply chain has been a change.” Winters finds the biggest challenge of their hand sanitizer operation to be the limited resources they have to produce a product with such high demand, so they triage. Winters strives to “prioritize donations to folks who have the least access to soap and water (still the most effective protection against COVID-19 spread) and the most contact with people.”

In Piedmont, Fire Chief Bret Black applauded the innovation of these companies, but says first responders and healthcare providers typically rely on their normal supply chain of medical grade equipment and supplies from a licensed provider.

Some researchers have posited that distilleries could play a another role in future efforts to contain the virus. In a Sunday front page story about the coronavirus in America in The New York Times, a retired medical historian at the Johns Hopkins School of Medicine suggested that distilleries could be converted to make vaccines at some point, saying “the government might take over and sterilize existing liquor or beer plants, which have large fermentation vats.”