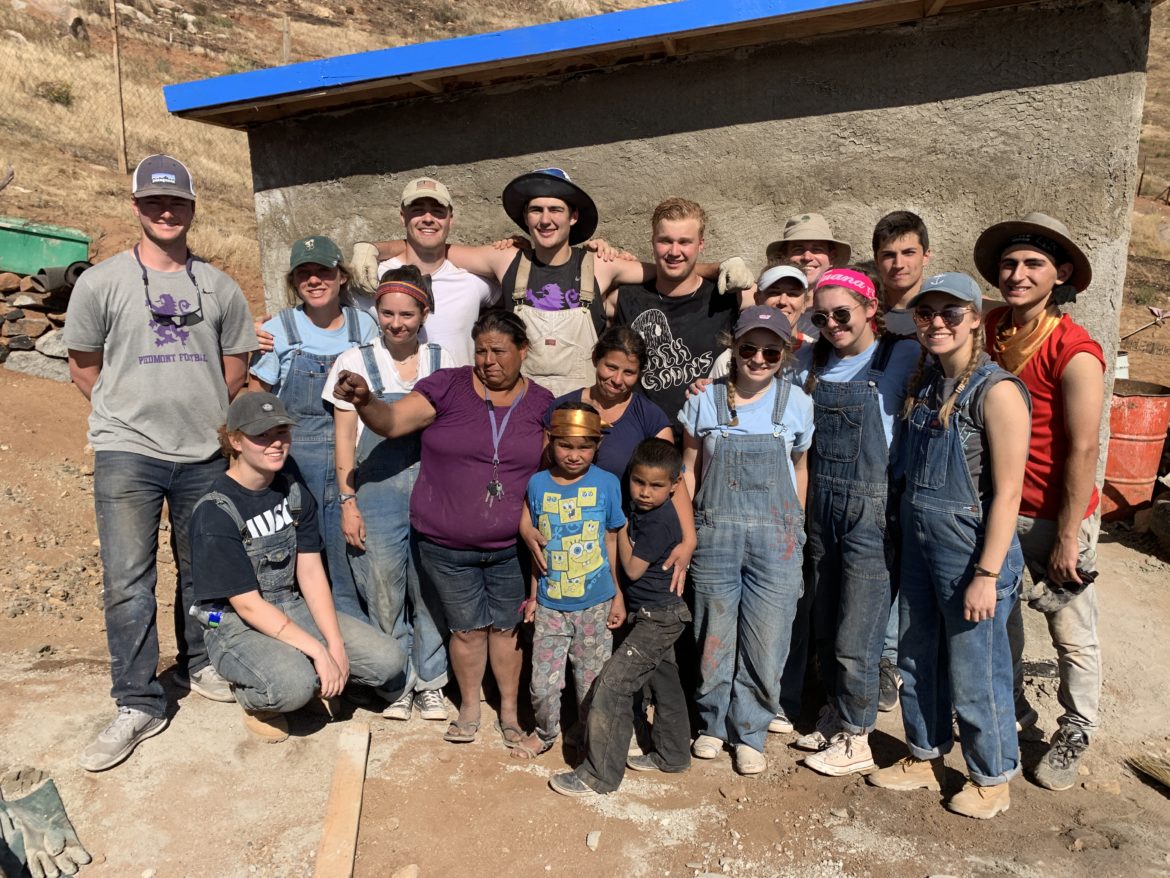 Copper Team with their family

There are tons of activities for Piedmont High School students that have been shut down due to the COVID-19 virus. Sports, prom, a public graduation ceremony. But one of the biggest was the annual trip the Piedmont Community Church organizes to take students down to Tijuana, Mexico, and build houses during spring break.

“It was honestly one of the biggest things I was really upset about. It’s so cheesy to say it’s a life-changing experience, but those are the best words to describe it. When I walk into the trip I walk out as as different person. There is no experience like it I can get somewhere else.”

Said senior Evan Eldridge, “This was definitely the most crushing out of everything. Obviously, this virus as a whole is awful. Graduation and prom, it sucks, but this is something that gives you a feeling you don’t get anywhere else.”

This year’s trip was to run from April 12-17. About 300 students were scheduled to take part, plus a couple of dozen adults.

The trip dates back about 25 years. Piedmont Community Church pastor Scott Kail has been running the operation for 18 years. Kail held off as long as he could, originally postponing the trip to June before finally calling it off in April.

“It’s heartbreaking,” he said. “It really is. We ramp up. We spend so much time and energy to get here. The kids have already started to form the bonds and friendships. We’ve been talking about the 18 families we were going to be building for since December. And they’ve known since December that we were coming to build a house for them. It’s crushing.”

The trip costs church members $975 and non-members $1,075. San Diego’s Amor Ministries, which organizes the construction, will use most of the funds to hire local laborers and build 10 of the 18 houses the Piedmont group was scheduled to construct.

“At least we can keep part of our commitment to the families we hoped to serve and provide a house for.”

In an interview, Kail added, “Unfortunately, that still leaves eight families that we had committed to that we couldn’t make happen.”

The Mexico trip is nearly a year-round enterprise for the church. When Kail came to Piedmont in 2002, about 15-20 students would participate. Now, teams of 13 students and two adults are each assigned a house. Last year, there were 20 teams, and the program cut back slightly this year to 18. Each team has two student leaders – seniors who have previously participated on the trip. Porter and Eldridge have each gone three times, and were looking forward to being leaders this year.

“It’s a pretty student-led trip overall,” Porter said. “The student leaders will have a plan in binders. I might have a wall team and have five on it, and tell them how to do a wall.”

The leaders were already working with their teams in preparation for the trip.

“As a leader, you have a lot more meetings leading up to it,” Eldridge said. “You have to memorize all the plans. As a freshman and a sophomore, everything you’re doing parents and leaders will be looking over you. As a leader, everyone will be expecting you to do it right the first time.”

Barbara Love, a parent of trip alumni and editor for the Piedmont Exedra, handles much of the logistics, including buying plane tickets and picking up vans in San Diego. Students apply during the fall and student leaders are chosen even earlier.

In addition to the building teams, there is a team of 17 people who cook for the group. The participants fly into San Diego, then take vans across the border. They stay in a campground run by Amor Ministries in Tijuana.

The houses are built on the outskirts of town. The recipients are poor families. In prior years, they were Mexican families living in cars or living in dilapidated structures, according to Kail. Now, more central American migrants are among the recipients.

Amor Ministries works with local pastors to identify potential recipients, according to Kail. Those families have to own or lease the piece of land. Amor then works with groups from all over the country to bring students to construct the housing year-round. Piedmont is one of the largest groups. Other Bay Area groups come from Orinda and Danville.

“We build an 11- by 22-foot house,” Kail said. “Single-pitch roof with a locking front door and windows. And it’s weather proof. It’s a wood frame structure with stucco on the outside.”

It’s a far cry from what many of the Piedmont kids have seen at home.

Said Eldridge, “My freshman year going down there, not only does it put a lot of things in perspective about how fortunate we are to live in Piedmont, but in Tijuana every day these people are having to fight to survive. It saddens you to see what’s going on, but every day makes you grateful for what you have.”

“It’s so moving and it creates a new and more meaningful part of myself,” she said. “I was really looking forward to it not only for myself but for my team members as well.”

The construction runs Monday through Thursday, with a ceremony presenting the keys to the houses to the families. That’s an extremely emotional moment for the Piedmont volunteers and the families.

Then, on the Friday, the group heads back to San Diego for a “de-briefing,” where the students stand up and speak about the trip. Porter called it one of the most special parts of the whole experience.

“People share their perspectives,” she said. She added that she had never spoken at the debriefing, but as a student leader, was working up the courage to step forward this year.

“I actually have never shared, which is one of my biggest regrets,” she said. “I was so looking forward to it this year.”

She said the cancellation is “pretty sad.”

“It’s a different feeling,” Porter said. “We call it Mexico magic. Everyone calls it that and to not have that its pretty heartbreaking.”