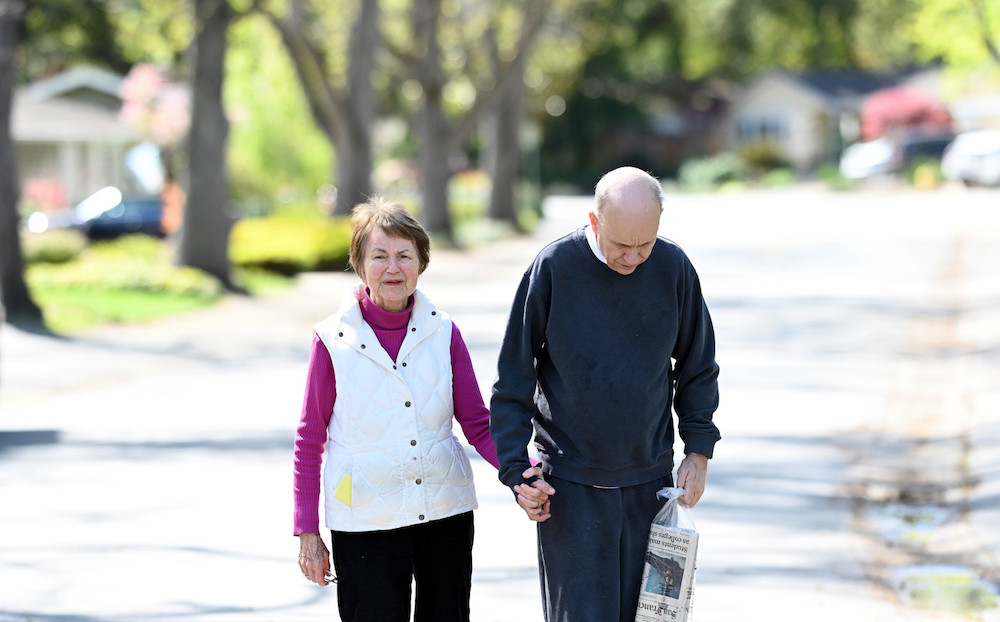 Sue Swezey, 83, has spent the last three weeks at home caring for her son John, who is 57 and severely autistic. John needs 24-hour supervision. He cannot cross a street safely. The other day, he used a metal fork to unstick a piece of bread stuck in an electric toaster. His mother rushed in to pull the plug.

Before the coronavirus pandemic struck, John Swezey and people like him with intellectual and developmental disabilities received state assistance through a network of 21 regional centers that funded programs that provided home health aides and other services. Those programs are now closed, and they could remain so for months.

That has left John Swezey confused and his mother struggling to get through each day.

“You are left to your own devices — you are the system,” Sue Swezey said, speaking by telephone from her Menlo Park home.

Across California, more than 360,000 people and their families depend on the safety net of programs for people with developmental disabilities. That net is now torn and frayed because of the coronavirus pandemic.

Those programs allowed many of the severely disabled, such as John Swezey, to live at home and get help from in-house aides and day care. They also allowed other people with disabilities to live in group homes. Their fate is now far less certain, since their close quarters, combined with their underlying health conditions, put them at risk of infection.

Although the state-funded programs are now closed, California is legally obligated to provide aid and has told providers to contact their clients by phone. But service providers who often hold contracts with regional centers are difficult to monitor, and even with phone contact, many families question how they will manage the simple tasks of daily living.

Some also fear for their safety. Disabled people with certain conditions, such as severe autism, can harm themselves or others, especially when routines are disrupted.

California’s safety net is stronger than in the rest of the nation. The Lanterman Developmental Disabilities Act, signed in 1969 by then-Gov. Ronald Reagan, guarantees care for people who are diagnosed before age 18 as intellectually or developmentally disabled because of such conditions as epilepsy, cerebral palsy, severe brain injury or, increasingly, autism, from cradle to grave.

Gov. Gavin Newsom has spent far more than other states on the needs of Californians with disabilities. His January budget proposal earmarked $9.2 billion for the Department of Development Services in 2020-21, nearly double the state’s spending a decade ago of about $5.5 billion in constant dollars.

However, program operators have been struggling for years, and even with the Newsom administration investments, the system remains underfunded by no less than $1.4 billion, a study done for the state shows. The pandemic has only worsened that situation.

“I didn’t see a light at the end of the tunnel before this,” said Gregg Gann, who runs Westview Services, Inc., a nonprofit in Anaheim that offers an array of services including job coaching for 800 people with developmental disabilities. Those services have all been shut down in the response to the coronavirus, and many of Gann’s workers face furloughs.

“The rainy day is here,” Gann said. “We don’t know if we’re going to survive.”

Caretakers still on the job face their own difficulties. Whether or not it’s an oversight, people who care for people with developmental disabilities noticed that they are not specifically included in Newsom’s 14-page order enumerating who is and isn’t an essential worker.

Maria Garcia, 51, of North Hollywood cares for Terrance, 77, a developmentally disabled man who has Parkinson’s and Alzheimer’s. His parents died, and Garcia is about all he has. He needs help with everything, including his most basic needs. Keeping six feet away is not an option. She has gloves, but no mask or protective gown.

Garcia, the mother of five, works the overnight shift. Two adult daughters take day and evening shifts. When Garcia’s shift ends, she does work for other clients.

“No time for sleeping. All day, you are busy,” Garcia said.

She has been caring for such individuals for 15 years. “I love this kind of job.” Why else would she be working for $15 an hour?

Angie Pena, 51, works in a regional center in Imperial Valley, near the Mexican border. From her home, she calls or Facetimes her 103 clients daily, and worries about emotional and financial stress on those clients’ parents.

“You calculated that you would need wipes for this long, but now there is no daycare, there is no program, there is no school,” Pena said. “I know it’s the parents’ responsibility to take care of their kids, but these were resources that they got used to having for years, and now it’s gone.”

Knowing that parents are struggling, leaders of the Autism Society San Francisco Bay Area offered grants of $250. The plan was to provide the money to no more than 20 families in need.

The organization’s leaders were stunned when more than 400 people applied. The organization ended up doing a drawing and gave out 63 grants, said its immediate past president, Jill Escher, mother of a son and a daughter who have autism.

Amanda Stevenson applied for and received the $250. She is a divorced mother who works as a manicurist, lives in the Bay Area city of Pleasanton, and cares for her 17-year-old son, Grant. Before the stay-at-home order, she would work at a salon while Grant would go to school, and attend day care programs. Now both are homebound.

Grant, she said,understands that there is something called coronavirus, and he washes his hands. He is at risk because of his asthma. It was especially tough for her to explain to him that they would not be taking a vacation at Disneyland. It’s the one trip they vacation they take, every other year. She had to assure him that while the park was closed, it would re-open and they would go when it is safe.

“I am sitting here trying to find out when it is healthy for me to go back to work,” Stevenson said.

In Texas, more than 70 residents and employees of the Denton State Supported Living Center, a facility that houses 450 developmentally disabiled people, have tested positive for the virus.

In California, there are reports of developmentally disabled people contracting COVID-19, including five in Orange County. One died last Saturday, according to Larry Landauer, executive director of the Orange County Regional Center.

But unlike many states, California shuttered large state institutions that once housed thousands of people with developmental disabilities. Most recently, the state placed the final few hundred residents of Sonoma Developmental Center in Sonoma and Fairview in Costa Mesa in smaller residential settings, lessening the chance of a widespread outbreak.

In John Swezey’s case, he was diagnosed as autistic in 1969, the year the Lanterman Act was signed by Reagan. Today, he is able to speak a few words and can read simple sentences.

But he needs to be monitored constantly.

His day program, Morgan Autism Center in San Jose, closed last month, as did all other such programs because of the pandemic. Complicating the situation further, the husband of one of John’s caretakers who helps out at their home has a sore throat and cannot risk infecting him and his mother.

The situation makes more real the question that weighed most heavily on parents of disabled people, even before this pandemic: What happens when they’re gone?

“We can’t die, and we really can’t get sick,” Sue Swezey said. “In this climate, who knows. Suppose I got the plague? What would I do? I don’t know.”

Last week, Sue Swezey connected with Ann Marie Palicio, who had worked with John at the San Jose day program. She has stepped in to offer respite care for a few nights.

Palicio considers the help she offers a calling. She has a brother who has cerebral palsy. As is so often true, she gets much in return.

“He accepts who I am without any question,” Palicio said. “It is a very comfortable relationship, not complicated. I appreciate the simplicity. In John’s own way, I believe he cares for me and I care for him.”

Anita Chabria is a Los Angeles Times staff writer based in Sacramento and Dan Morain is a contributing writer to CalMatters, a nonprofit, nonpartisan media venture explaining California politics and policy.