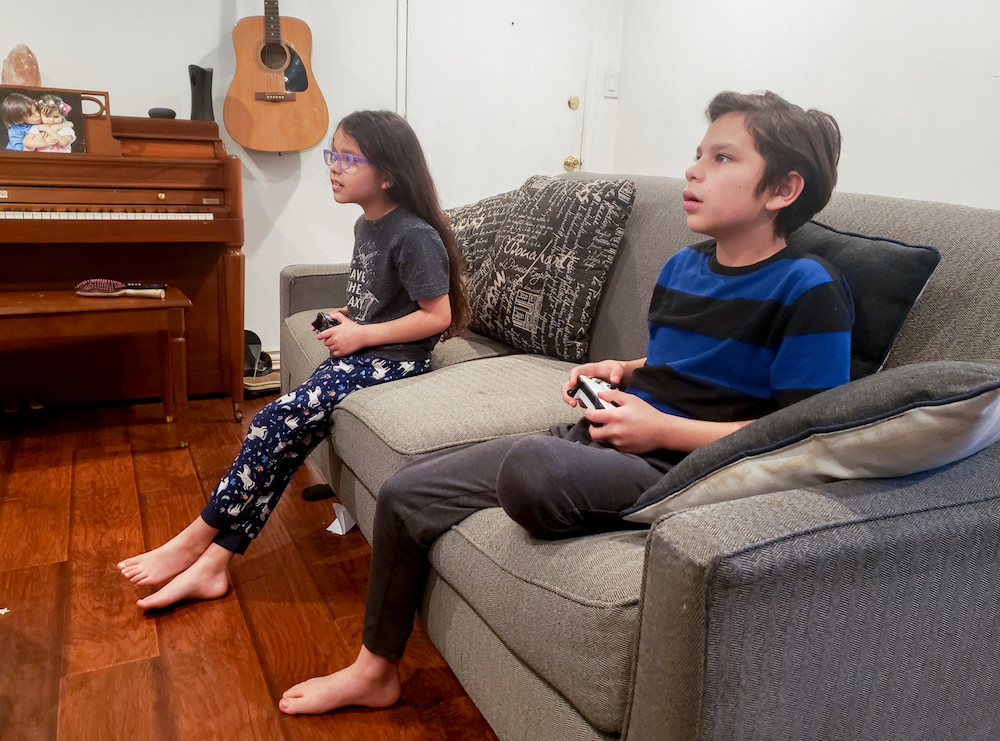 Melina, 8, and her brother Adrian, 9, play minecraft before bed. With limited classwork provided by their district the Torres kids have plenty of time for video games when their homework is finished. Photo courtesy of Raul Torres

Their schools sit just five miles apart on opposite ends of Southern California’s notoriously busy Interstate 405, but the gap between their students’ distance learning experiences so far has been vast.

In Redondo Beach off the South Bay coast, Karen Cull’s three sons began engaging with their teachers online March 18, three school days after their district physically closed campuses to combat the spread of the COVID-19 pandemic. On Monday, Redondo Beach will begin “Phase 2” of distance learning, in which teachers and students will be expected to cover new content.

In Hawthorne, an inland working-class community, Raul Torres spends five hours a day with his second-grade daughter and fourth-grade son completing paper packets. He’s heard little from their teachers in the four weeks after schools physically closed and the district doesn’t plan to roll out its distance learning program until April 21.

“It’s been challenging because, obviously, I’m not a teacher,” Torres said.

Across California, school districts are each frantically tackling the same challenge — how to keep students learning remotely — with varying degrees of preparedness. Conversations with parents across the state reflect existing disparities: Wealthier districts appear more likely to weather the transition with greater ease.

While school systems like Redondo Beach have been able to transition toward online learning without skipping a beat, parents in many districts have said they’ve gone weeks before hearing much about their schools’ academic plans.

A limiting factor in schools’ transitions has been access to Internet and technology and whether schools had the finances and infrastructure to provide families these resources. Across California’s 1,000 school districts, there have been longstanding inequities in the amount of funding districts have been able to locally raise for needs like student technology.

State Superintendent of Public Instruction Tony Thurmond said this week that the state is working to secure 150,000 devices for students who don’t have one so they can do online learning. Recent hotspot and Chromebook donations from Google have helped make a dent, but not enough, Thurmond said Tuesday. He asked for public donations to secure computers for students.

“We have had a digital divide in this state and in this country for many years, and It’s an embarrassment, and we must change that,” Thurmond said.

State officials have said they expect that most California districts will have formally launched distance learning programs by the end of April, though scenarios such as in California’s South Bay underscore the wide variance in how schools are shifting toward it.

About 9 in 10 students in the Hawthorne district are socioeconomically disadvantaged, according to state data, but academics have praised the district for narrowing achievement gaps for its black and Latino students. More than one-third of the district’s students are English-language learners.

Before the pandemic, Torres said his 8-year-old daughter was learning a lot, challenged by a rigorous curriculum.

“She was learning things that I never learned until I was in high school,” Torres said.

Since his children’s schools physically closed, Torres, an electrician, has dedicated afternoons and evenings to working through two weeks’ worth of paper review packets with his kids. Torres’ autistic son has not received any special education services, he said, so he relies on the parenting classes he took to help the fourth-grader.

Torres sees the difference in distance learning as he travels to job sites across Los Angeles. Customers in Torrance and Manhattan Beach, for instance, trade notes on how far along their schools are in making the transitions.

“They already have the means to do it,” Torres said. “We don’t (in Hawthorne), not yet.”

A survey by The Education Trust-West, an advocacy group focused on closing student achievement gaps, showed widespread concerns from parents about student regression.

The poll of 1,200 California parents found that while 8 in 10 gave their schools positive marks in handling the aftermath of school closures, just 45% of respondents said that their schools were providing them with regular contact or access to their child’s teachers.

Nineteen percent of parents — including 1 in 5 Latino respondents — said they’ve received little to no academic information from their schools. Most black and Latino parents said they’re worried they don’t have the resources to keep their students from regressing.

“Long before this pandemic came, California faced an epidemic of educational inequality,” said Elisha Smith Arrillaga, executive director of The EdTrust-West, adding that school closures “will only exacerbate those gaps.”

“There is simply no way to close schools for a month without gaps in student learning,” she said. “Now is the time to accelerate planning to ensure that teachers and school leaders have the resources they need to stop those gaps in their tracks.”

In Redondo Beach, Cull praised the district’s rapid and “fantastic” response in shifting toward online. The district closed schools March 13, a Friday. By the following Wednesday, Cull’s students were taking part in online lessons covering prior materials. Special educators were quick to prepare a plan for her son with Down Syndrome, she said.

Each teacher has had different approaches to online learning, Cull said. One of her oldest son’s high school science teachers set up a class meeting using Flipgrid, where students could see each other and interact in a virtual lesson — a helpful exercise in social interaction.

“He got such a kick out of seeing the videos that the other kids have posted and just seeing other 15-year-old kids in their bedroom messing about,” she said.

About 16.5% of Redondo Beach students are socioeconomically disadvantaged, according to state data, and about 4% of students are English learners. Like Torres, Cull also trades notes with other parents. She says she and her sons are in “a very lucky place right now.”

“What this is doing is exacerbating the existing differences, the existing inequalities,” Cull said. “This situation has emphasized (inequalities) because the districts like Manhattan Beach and Redondo Beach have had existing technology structures already there.”