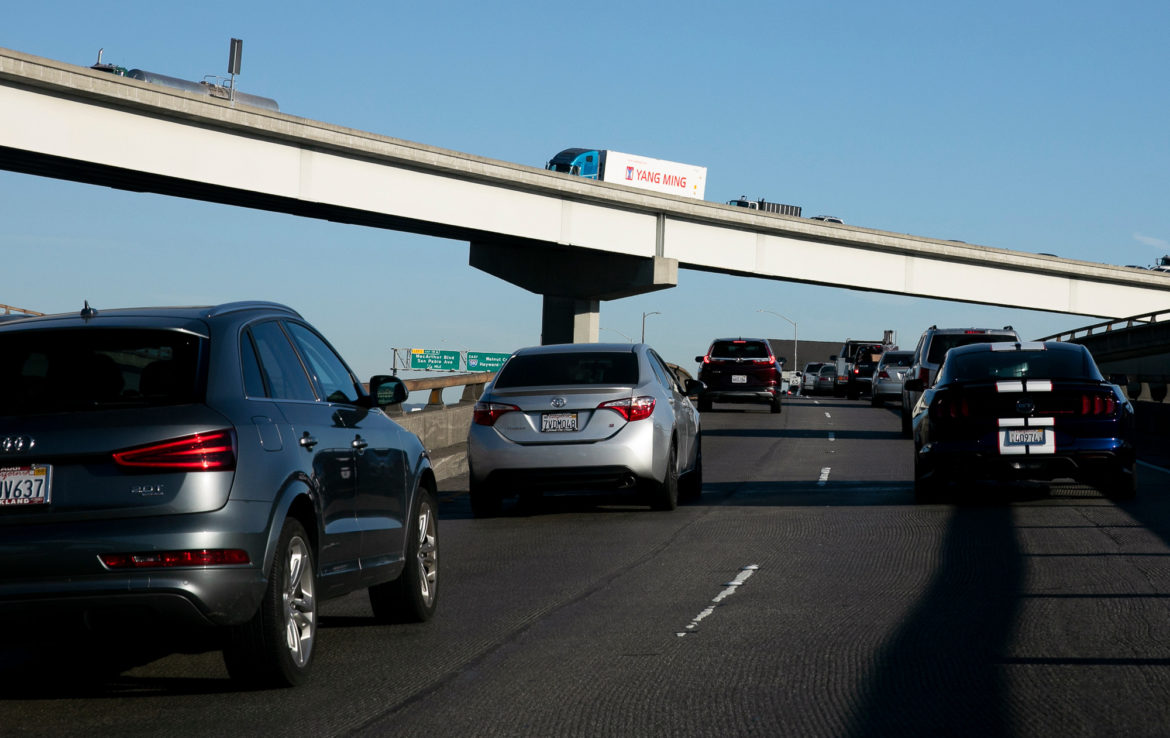 The Trump administration has announced new rollbacks to emissions standards. Photo by Anne Wernikoff for CalMatters

California is prepared to take the Trump administration to court – again –after the federal government on Tuesday rolled back its major rule reducing greenhouse gases and smog-forming emissions from cars.

The Trump administration issued a final version of its rule, which loosens Obama-era requirements that improve the fuel economy of new cars and light-duty pickup trucks by roughly 5 percent every year. Instead the new rule requires a 1.5 percent yearly increase in the stringency of fuel economy and greenhouse gas standards, reaching 40.4 miles per gallon for 2026 vehicles.

California Attorney General Xavier Becerra criticized the Trump administration’s timing as the state focuses on fighting the coronavirus, which so far has killed at least 135 Californians.

“I don’t think there’s any doubt that this timing is more than tone deaf,” Becerra said at a press briefing Tuesday. “It’s difficult to believe that we’ve now got to divert some of our state attention to trying to tackle an unlawful attempt to change our clean car standards.”

The loosening of fuel economy standards means that cars will be allowed to emit more climate-warming carbon dioxide as well as pollutants that cause smog.

An analysis by the Environmental Defense Fund projects that the weaker standards will produce 1.5 billion additional metric tons of climate-warming pollution by 2040, which is about as much as 68 coal plants running for five years. The analysis also projects that the new rules will contribute to more than a quarter-million asthma attacks by mid-century.

In a press briefing today, U.S. Secretary of Transportation Elaine Chao said the new standards will save consumers about $1,000 on new vehicles, and that it reflects a world with cheaper oil, more U.S. oil production and more demand for large vehicles like SUVs. She said it “will make newer vehicles more affordable to consumers, safer for passengers, and cleaner for the environment. So it is a win-win-win solution.”

The rule will affect vehicles starting with model year 2021. But California Air Resources Board chair Mary Nichols said that, based on previous conversations with car companies, she expects them to continue complying with existing greenhouse gas standards as the state and the federal government fight it out in court.

Julia Stein, supervising attorney at UCLA’s Frank G. Wells Environmental Law Clinic, doesn’t predict a speedy end to the fight over the clean car rules. She said that it’s entirely possible it will end up at the Supreme Court.

“It’s unlikely that these challenges will resolve this year, to say the least,” she said. “I think we will see the litigation on this rule continuing into the next presidency, whoever that may be.”

Becerra said that his team will need to wait until the new rule is officially published in the Federal Register before filing another lawsuit. The state has already sued the federal government twice over a first phase of the rollbacks, which yanked California’s authority set its own greenhouse gas standards for vehicle exhaust and require the sale of zero emission vehicles in the state.

Other states likely will sue, too. California led a coalition of 23 states, Washington, DC and two cities in its previous two lawsuits against the administration over its efforts to remove California’s authority to set clean-car rules.

“I don’t think there’s any doubt that we’ll be prepared to take any steps necessary, including legal action,” he said.

The long-promised relaxation of the regulation does not ease the requirements as much as the Trump administration’s 2018 proposal, which would have flatlined fuel economy nationwide at roughly 37 miles per gallon. But the new rule nevertheless presents a major setback to California’s power to protect public health by combatting smog and climate-warming gases from transportation, the state’s biggest greenhouse gas polluter.

“At a time when the coronavirus is attacking people with preexisting conditions – with lung disease, heart disease – hardest, the last thing you want to do is create an environment where you’re making your people more and more susceptible,” Becerra said.

Carmakers, too, referenced the novel coronavirus epidemic, but they dwelled on the economic consequences of the outbreak and what it means for their compliance with federal standards.

“It is important to note that this final rule establishes near-term compliance obligations, understanding that the auto industry and our nation face economic challenges due to the COVID-19 public health emergency,” John Bozzella, president and CEO of the industry trade group Alliance for Automotive Innovation, said in a statement.  “The greatest opportunity for environmental benefits will happen as we look to longer-term policies beyond 2026.”

Although thirteen major automakers and the United Automakers Union agreed to the fuel economy and greenhouse gas standards set by President Barack Obama, some car companies began petitioning President Donald Trump’s transition team to revisit them before he took office.

Since then, however, automakers have faced an uncertain future as California and the federal government take clean car standards to court. Charting a detour around the uncertainty of protracted litigation, California cut its own deal with four major automakers: Honda, Ford, Volkswagen and BMW.

Under that voluntary agreement, the car companies agreed to follow California’s rules in return for an extra year and more flexibility to meet the Obama-era greenhouse gas requirements.

“We continue to move forward with those companies that have signed on,” Nichols said, adding that Volvo is also now in conversations with the state about implementing the agreement.

Beyond that, Nichols said, “We don’t want to make any other announcements at this time. We have had conversations with some other companies, more than one, and I’m sure that there will be more now that the rule is actually out.”

Still, of the four automakers that agreed to it, only BMW and Ford told CalMatters explicitly that they intended to honor their agreements with California.

“We remain committed to meeting emission reductions consistent with the California framework and continue to believe this path is what’s best for our customers, the environment, and the short- and long-term health of the auto industry,” Bob Holycross, Ford’s vice president of sustainability, environment and safety engineering, said in a statement.

Honda representative Briana Washington and Volkswagen representative Mark Clothier did not respond directly to a question about California’s car deal.

“We plan to continue to uphold our commitment to year-over-year reductions in [greenhouse gas] emissions in line with our global commitment to uphold the Paris Climate Accord,” Clothier said.