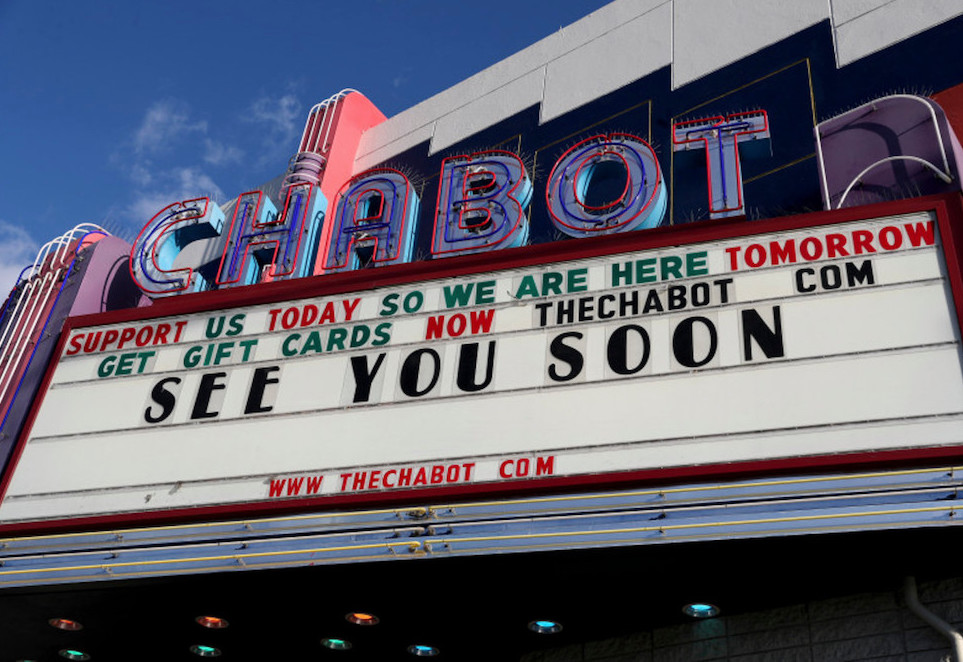 A hopeful message is seen on the marquee of the The Chabot theatre on Castro Valley Boulevard day nine of the coronavirus stay-at-home order in Castro Valley, Calif., on March 26, 2020. Photo by Jane Tyska, Bay Area News Group

California aims to help businesses shuttered by the coronavirus pandemic by assisting them with inventory problems and credit card debt they’ve amassed. Those are among the ideas to be considered by a new, 80-member task force that Gov. Gavin Newsom created today to guide the state’s economic reopening and recovery.

Co-chaired by former presidential candidate and businessman Tom Steyer, the task force includes many A-list business leaders from a broad spectrum of sectors — from retail to restaurants and from airlines to utilities.

California’s economic engine was humming along until it took a massive hit last month, along with the rest of the global economy, as businesses closed down to stem the spread of the virus. California lost nearly 100,000 jobs in March, shattering a 10-year long continuous period of job growth.

Newsom said 3.1 million people have filed for unemployment since March 12, and the state’s unemployment rate for that month is now 5.6 percent — a figure that hasn’t taken into account the job losses incurred in April.

“We are now in a pandemic-induced recession in the state of California,” he said.

The task force is the state’s first step toward a comprehensive plan for reopening businesses, but details of its focus were spare at today’s press conference and ensuing interviews.

Steyer will co-chair the task force with Newsom’s Chief of Staff Ann O’Leary. Most of the members reside in California.

“In the coming weeks and months, we will bring together the public and private sectors, outside experts, organized labor, environmental groups and activists to develop recommendations for a recovery plan that works for all Californians, with an emphasis on those communities hardest hit by the pandemic,” Steyer said in a press release.

Newsom’s selection of Steyer to chair the task force drew an immediate rebuke from Assemblyman Kevin Kiley, a Sacramento-area Republican.

To alleviate the burden on those businesses, Reses said the state will prioritize their immediate needs: Restocking their shelves, telling customers what they have for sale and helping with credit card debt they used to stay afloat during closures or significantly reduced hours.

“They need to let the customers know when are they open, what’s for sale. They need to manage their inventory and keep the shelves stocked,” Reses said. “We need to think across the broad spectrum of needs, many of which are new.”

Task force members said California can’t do it alone; they will need federal help. Reses said the federal government’s Paycheck Protection Program needs to be expanded. The program offered $349 billion in forgivable loans, and that well has already run dry.

“Congress and the administration must go further,” Reses said. “Our smallest businesses were underrepresented in the first wave of PPP funding.”

On a day when President Trump supported protesters in favor of reopening businesses across the country despite state-issued shelter-in-place orders, Newsom said it’s too soon to address when Californians can attempt to regain their lives outside their homes again.

“The worst mistake we can make … is to pull back right before we’re at a point where we can start toggling back,” Newsom said.

Newsom said the swift-moving nature of the pandemic and the economic devastation it has wrought wedged a lot of history into a few short weeks.

“It’s been said that there are decades when nothing happens,”  Newsom said, “and there are [weeks] that decades happen.”