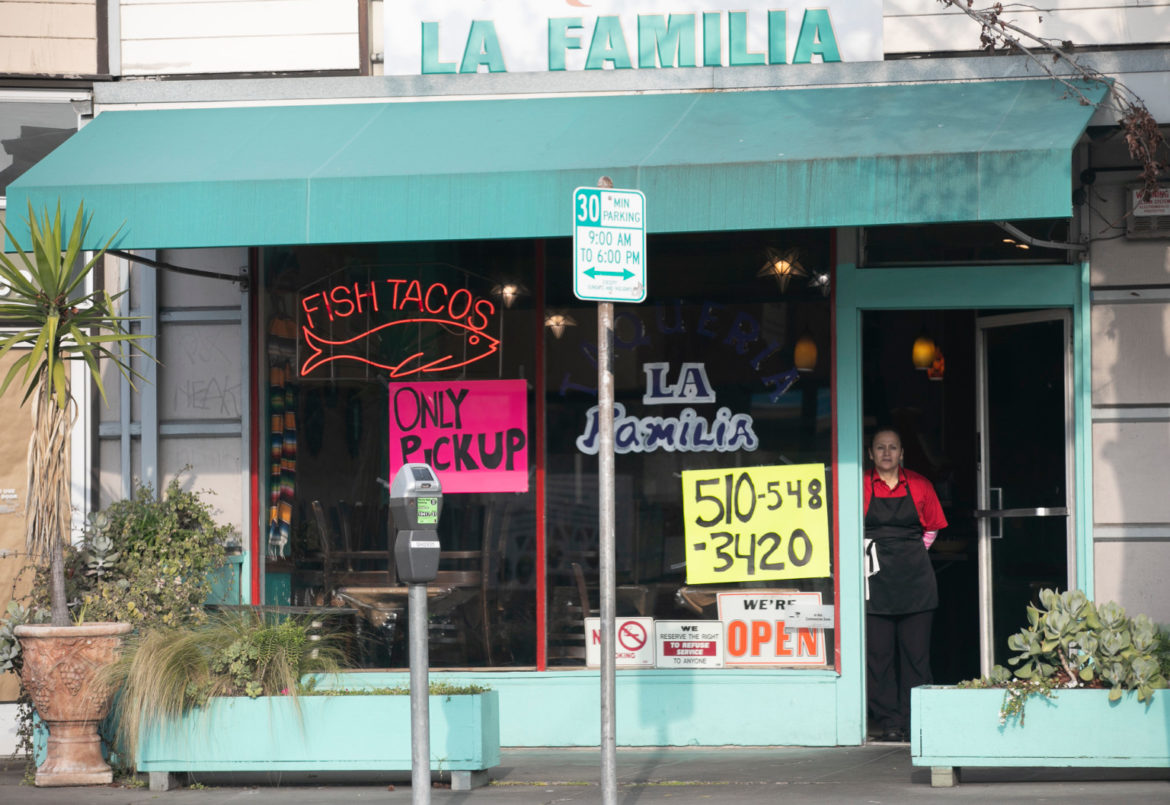 An employee at a taqueria in Berkeley, California. Photo by Anne Wernikoff for CalMatters

Updated March 21, 2020, to include new details on essential workers.

In ordering California’s nearly 40 million residents to stay at home, Gov. Gavin Newsom brought myriad county and city public-health directives under a single umbrella in one of the largest restrictions on civic life in American history.

But amid the chaos of an unprecedented pandemic, the specifics of that Thursday order — like the run-up to the order itself — have been a work in progress. Lawmakers and businesses spent Friday in a welter of confusion about who’s allowed to go outside and who should go to work, as state agencies huddled, working out exactly which workers were and weren’t “essential.” As Saturday arrived, so did clarification: a 14-page list of “Essential Critical Infrastructure Workers.”

The comprehensive list ranges from first responders to restaurant delivery people and includes — yes — cannabis retail workers. It was accompanied by a list of answers to frequently asked questions. (Yes, you can leave home to care for your elderly parents, as long as you practice social distancing for their and your own health, but no, you may not visit them in a nursing home.)

The FAQ also made clear that the state order takes precedence, though cities and counties can impose tighter restrictions. Cities and counties have, as the crisis has mounted, been issuing their own shelter-in-place orders and other directives in an effort to contain the spread of the coronavirus. Many of those orders included specific details about which activities are considered essential, and therefore exempt from the order to stay inside. Others spelled out if, and how, the directives would be enforced.

The clarification brought a modicum of order to what has been a patchwork of local responses, some specific, some less so. In Alameda, Santa Clara and Placer counties, plumbers, auto mechanics and laundromats are exempt; bars and sit-down restaurants, not. In Sacramento County, officials said violation of its shelter-in-place directive would be a misdemeanor.

In Orange County, details had been a little lighter. Gyms and health clubs were ordered shut. After an initial declaration with an exhaustive list of exempt businesses was rescinded, the county’s new decree was mum on plumbers and other specific services.

In rural, sparsely populated Alpine County, public health officials kept their order colloquial: “Contact with restaurants should all be take-out or delivery. There should be no gatherings of any kind. Walk your dog, go for a hike, sit and enjoy the sunshine!”

The updated state order, buttressed with misdemeanor penalties as in the sterner local orders, is a mash-up: statewide exemptions (with social distancing) for plumbers, mechanics, laundromats, hikes and dog walks; shutdown for gatherings, bars, gyms, nail salons and sit-down restaurants.

“A state as large as ours, a nation-state, is many parts. But at the end of the day we’re one body,” the governor said in a livestreamed address. “There’s a mutuality and there’s a recognition of our interdependence that requires of this moment that we direct a statewide order for people to stay at home.”

Initially, however, a website maintained by the governor’s office to provide the public with information about the COVID-19 pandemic offered only minimal specifics, tossing off the subject of essential services with just a handful of examples, “such as”:

The website went on to say some businesses, “such as” those listed below, are to close:

The initial order also exempted businesses that are needed to “maintain continuity of operations of the federal critical infrastructure sectors” as outlined by the Department of Homeland Security.

Assemblywoman Melissa Melendez, a Republican from Lake Elsinore, was among the first to point out the need for clarification on Thursday, comparing the more detailed list of exempted activity issued by Los Angeles County with the order put out by the governor.

“That’s less clear. And I know it’s less clear because I have people who were contacting me asking: ‘What does this mean?’ ‘Can I go to work?’ ” she said Friday, speaking from her home office.

In a real-time illustration of that uncertainty, Melendez said that there were workers at her home repairing a leak in her bathroom.

“I told my husband to text and ask if they’re still coming today and they said construction is considered essential business,” she said. But she also said she received a message from a constituent telling her that his father, an electrician, had been ordered to stay home.

“Nobody knows what the hell to do and are afraid that law enforcement are going to come out and arrest them,” she said Friday. “I’m trying very hard to not be critical of the governor because its a stressful and chaotic time, but tightening this up a little would really reduce the stress level.”

The governor’s office also was initially vague on whether cities and counties had the authority to fill in their own additional details, carving out more specific exemptions or adding more restrictions.

In the meantime, some counties were making the call on their own.

“For now we’re encouraging residents to follow both orders,” he said.

Stephen Duvernay is a senior research fellow at Berkeley Law’s California Constitution Center and an attorney with Benbrook Law Group in Sacramento. He said that based on both his interpretation of the governor’s decree and the way past orders have been interpreted, “the order leaves room for local governments to impose further restrictions consistent with the state standards.” (Newsom’s office made clear in its update that that interpretation was what he had in mind.)

California law grants governors broad authority during emergencies to make or suspend policy and to enforce those policies with limited oversight or due process. That Newsom decided to use such a light touch is notable, said Duvernay.

“Just as important as the reach of the governor’s authority is how he chooses to exercise it,” he said. “The governor is asking us all to use common sense and for local officials to use their best judgment in implementing the statewide standards.

“This cooperative exercise of authority is critical, since the demands and resources of urban centers like Los Angeles or San Francisco may differ from those in the state’s rural counties,” Duvernay continued. “No one in law enforcement wants to be arresting people for walking their dog right now.”